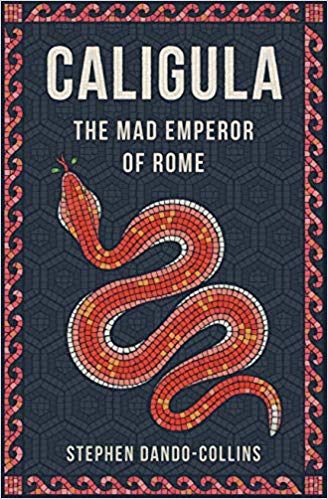 The subject of this new biography is a meme in his own right, an archetype of the licentious, capriciously violent, and deplorable ruler. Twenty centuries after his short life, Caligula’s seamy reputation lives on.

What accounts for the infamous emperor’s persistent prominence in this age of flash-in-the-pan villainy? Do that many folks today read Suetonius, Josephus, and Tacitus? Or is Robert Graves mostly to credit/blame, with his 1930s-era Claudius novels and the chain of pop-culture mashups they influenced?

On film and video, Caligula has been played by actors as diverse as Emlyn Williams (1937), Jay Robinson (the emperor as shrill 1950s’ popinjay), and — as the sensationalist 70s rolled around — both John Hurt and Malcolm MacDowell.

In Caligula: The Mad Emperor of Rome, author Stephen Dando-Collins sets out to swim against the tide of overcooked sensationalism that hangs about his subject and “to address those distortions, mistruths, and misunderstandings, so that a more accurate picture of the young emperor can be arrived at.”

As Dando-Collins points out, Caligula was still the unblinking agent of gratuitous and deadly violence on senator, citizen, and slave alike, and he could be relied upon to demand intimacies from the wives of friends and advisors with tidal regularity. He even married a few and bumped off their incumbents. The book’s subtitle, in fact, might seem to rebuke the author for his pretext of rehabilitating Caligula’s image.

Nonetheless, this is a marvelously readable popular biography. It’s studded with atmospheric, well-crafted set pieces highlighting both the excesses of this emperor’s reign and his imperial milieu:

“While playing dice with his friends at one Gallic city, Caligula ran out of money. Leaving the others playing, he departed the room and called for the census lists of all the wealthy citizens of Gaul. He then ordered the richest of them arrested, convicted of crimes, and executed, or required to commit suicide. He then confiscated and liquidated the victims’ estates, adding the money to the depleted treasury.”

Another revealing interlude centers on a massive statue of Zeus in the temple at Olympia in Greece. Caligula ordered the monument taken from its pedestal and brought to Rome, where he intended to have the god’s head removed and replaced with his own. He charged governor Memmius Rufus with handling the transfer. But the local workmen balked, hearing laughter coming from the statue.

Memmius and his beautiful wife, Lollia, took the hit for this impudence. You guessed it: The emperor ordered Memmius to divorce her so…well, you can piece together the rest of the tale on your own.

Caligula once bestowed a house and staff of servants on his favorite chariot horse, Incitatus, and appointed the horse to the priesthood. When the senate got under his skin, he threatened to make Incitatus a consul.

On another occasion, a crafty senator, Domitius Afer, universally regarded as unsurpassed for his oratory, flimflammed the ruler in a way that might seem to augur present days. The envious Caligula had brought trumped-up charges of treason against the legislator. At his trial, Afer addressed the indictment article by article, praising the substance of the prosecution “as a work of genius.”

Caligula, a sucker for praise, immediately set the senator free. He later appointed him a consul.

After an inconclusive stab at the medical etiology of Caligula’s excesses, Dando-Collins winds his book up (“Drawing Present-Day Lessons: Is Donald Trump The Modern Caligula?”) by bumping through a roster of traits and news items in which Caligula parallels the Donald.

His argument here, while perhaps appealing on the intuitive level, ultimately falls short, coming across as superficial and wishfully forced. But don’t let the author’s flailing bids for relevancy put you off. This is a well-written and pleasantly readable take on the life and times of a 1st-century emperor who reigned for just four years and was assassinated by conspirators at age 29.

Reviewer Bob Duffy, who once taught comparative literature and film at the University of Maryland, is a retired ad-agency vice president and brand consultant.