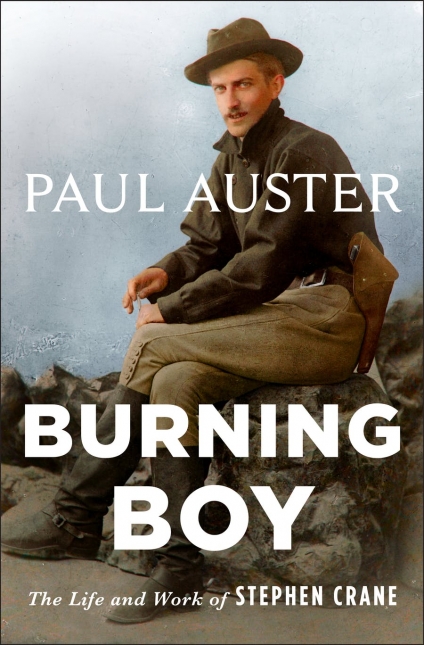 Early in Burning Boy: The Life and Work of Stephen Crane, author Paul Auster discusses his concern that people have forgotten Crane. He admits that Crane’s major books are widely available, the 10-volume set of his collected works is still in print, and an army of academicians regularly points its scholarly brain at the study of the brilliant, prolific, late-19th-century author who died at the age of 29.

But Auster’s worry is that “general readers, that is, the people who are not academics or writers themselves, the same people who still take pleasure in reading old standbys such as Melville and Whitman, are no longer reading Crane.” He adds, “If it had been otherwise, I never would have thought of writing this book.”

“This book” is hard to characterize. Though it describes Crane’s life in fine detail, it is not a biography in the traditional, scholarly sense — as the author himself is quick to agree. It takes a few too many speculative liberties with its subject, and Auster wears his heart too plainly on his sleeve.

In its many in-depth analyses of Crane’s writing — which is excerpted at length — the book feels much like a 200-level American lit class, which is not necessarily a bad thing. An enthusiastic teacher who loves his subject can light a fire in his students, and it is clear that Auster loves his subject.

Yet if Burning Boy is indeed aimed at Auster’s idea of general readers, specifically those who don’t already think of Crane as someone they want to read, then the author may have overestimated the willingness and attention span of his target audience. It’s quite a bit to ask an uncertain reader to follow along on one author’s journey of 800 pages so that she might be convinced why another author is worth reading.

But it is undeniable that Crane is worth reading, and it remains a mystery why he hasn’t become embedded in the continuously read American canon among such evergreens as Poe, Hawthorne, and Twain. Crane’s circle of friends (and literary equals) included Joseph Conrad, Henry James, Ford Maddox Ford, and H.G. Wells. Though his career didn’t even span a decade, he was prolific and became toweringly famous in his mid-20s with the release of The Red Badge of Courage.

What’s difficult for today’s readers to appreciate — since none of us were there to experience the before and after — is how norm-shatteringly different Crane’s writing was from anything else that had come before it, with its gritty realism, pared-to-the-bone prose, and no tidy moral. Auster is on solid footing to assert that Crane is the first modern American writer, but the importance of that distinction, and of the cultural kerfuffle that Crane’s work initially caused, is necessarily lost on contemporary, post-modern readers.

Certainly, Auster works to overcome that disconnect and get readers to understand the sheer uniqueness of Crane, whose writing career took place in the final years of the 19th century, from the time he was 20 until his death in 1900. In every respect, Crane was a self-taught, self-made man; the talent he had he developed himself.

With his Methodist minister father dead when Crane was 8, his temperance-preaching mother often absent, and siblings who were all much older, Crane was in many ways left to raise himself. Young Stevie sometimes wandered the neighborhood to find a family to have supper with.

Frequent illness kept him out of school, which didn’t interest him anyway, but he read everything that captured his attention. His brother Townley gave him his first newspaper job, and Crane never looked back. What little money he earned came from writing.

It’s somewhat stunning to learn just how little money that was. Crane — for several years of his life one of the best-known writers in America — had no one advising him on financial matters or looking out for his best interests, and he entered into horrifically bad business arrangements and contracts.

There were times when he was working under something like indentured servitude, in which his output of stories could never overcome the debt of stories he still owed, and he was forever borrowing against stories not yet written. That he pounded out such a volume of newspaper columns, essays, poems, short stories, and novellas seemed driven as much by the need to eat as to create.

Auster describes Crane’s life as “frantic,” and that feeling of a kind of time-pressured desperation comes across clearly. Crane makes several references to believing that he won’t live long — this rail-thin, chain-smoking dervish with already-damaged lungs — and seems determined to pack as much living as possible into whatever years he has.

And pack he does, especially in his pursuit of war zones. His boyish eagerness to get to the action before it’s all over seems at odds with his unromantic depiction of the results of that impulse in his fiction. But it’s not a huge stretch to imagine Crane felt the need to test his mettle in authentically dangerous situations, much as his protagonist Henry Fleming is forced to do in Red Badge. According to observer accounts, he acquitted himself well, if at times recklessly.

Frantic, reckless, restless: Crane was never still. He moved through life as though pursued. It’s the image Auster conjures with his title, that of a young life burning brightly before burning out.

Auster’s book is a labor of love, an homage to a writer he both deeply admires and finds confounding. In the end, his zeal for his subject brooks no resistance. Perhaps those general readers will take in reviews of this book, prompting them to pull out their high school paperbacks of Red Badge to remind themselves of what they’ve forgotten (mea culpa), and then come back to Burning Boy for guidance on what of Crane’s to read next.

In which case, Paul Auster will have succeeded.

Jennifer Bort Yacovissi’s debut novel, Up the Hill to Home, tells the story of four generations of a family in Washington, DC, from the Civil War to the Great Depression. Her short fiction has appeared in Gargoyle and Pen-in-Hand. Jenny reviews regularly for the Washington Independent Review of Books and serves on its board of directors as president. She has served as chair or program director of the Washington Writers Conference since 2017, and for several recent years was president of the Annapolis chapter of the Maryland Writers’ Association. Stop by Jenny’s website for a collection of her reviews and columns and follow her on Twitter at @jbyacovissi.