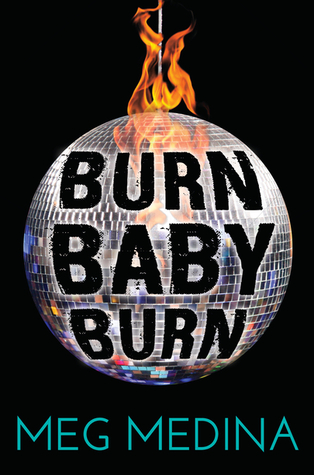 In the summer of 1977, 17-year-old Nora Lopez is teetering on the edge of, well, everything: high-school graduation, an imploding family, a serial killer stalking unsuspecting couples, and a New York City that’s about to go dark — in every way.

Author Meg Medina does a masterful job in her newest novel, Burn Baby Burn — a strong follow-up to the award-winning Yaqui Delgado Wants to Kick Your Ass — taking readers into Nora’s world and the all-too-real events that defined a New York generation 40 years ago.

And she does it with electric characters and taut, vivid scenes. Burn Baby Burn doesn’t feel like it’s taking place in some long-ago yesterday. In Medina’s rendering, 1977 is still going on — in the here and now.

Nora struggles with fear and dread both in and outside of her Queens apartment. There’s her emotionally fragile Cuban immigrant mother, Mina, and her brilliant but damaged brother, Hector, who may be behind the arson that’s destroying the neighborhood.

Medina uses the haunting backdrop of serial killer Son of Sam and the notorious New York City blackout that plunged the city into utter darkness — causing riots and pandemonium — as larger reflections of Nora’s inner turmoil.

She’s struggling to deal with a predatory sexual encounter that’s left her traumatized and distrustful of men. She’s also caught up in both the thrill and confusion of the nascent women’s movement, which promises greater opportunities for young women, but offers few role models for Hispanic women — and no user’s manual for how to get there.

As Nora prepares for graduation and the adult world beyond, she must consider the inevitable question faced by most children of immigrants in loaded moments of transition: should she stay or should she go? That is, stay at home with her Spanish-speaking mother who is divorced, unstable, and financially strapped, or stake a claim to her own life and escape the restrictions of a dysfunctional family and an oppressive neighborhood where everybody knows your name — and your business.

It’s hardly any wonder that Nora sometimes fantasizes that she’s with the young Hispanic TV star Freddie Prinze. His meteoric rise to fame ended suddenly and tragically with his early death from suicide in January 1977. One minute, Nora is cleaning the empty apartment for Mina, and in the next, she’s dancing with her beloved Freddie: “He twirls me to all the corners of the apartment, whispering in my ear, ‘Looking good, Nora!’ I shake my body, feel his love in my bones for exactly who I am. I don’t have to tell Freddie lies. I don’t have to know if I’m going to work or going to college. I don’t have to worry he’ll think I’m shit because of my family. He knows how hard it is to keep up a show, how tough it is some days to hang on.”

Burn Baby Burn is more than just a coming-of-age novel. It’s also a keen exploration of the immigrant experience, family violence, mental illness, and the convulsive revolution of sexual politics in the 1970s. All of it is still highly relevant.

With Yaqui Delgado and now Burn Baby Burn, Meg Medina has established herself as one of the most important voices in young-adult fiction today. Read them both. And then wait impatiently to see what Medina will come up with next.

Steve Watkins is the author of a dozen books for middle-grade and young-adult readers, including the Ghosts of War series from Scholastic and Great Falls, a novel about coming home after the wars in Iraq and Afghanistan.

The Scatter Here Is Too Great

A debut collection of nine stories tied together by a bombing in Karachi.