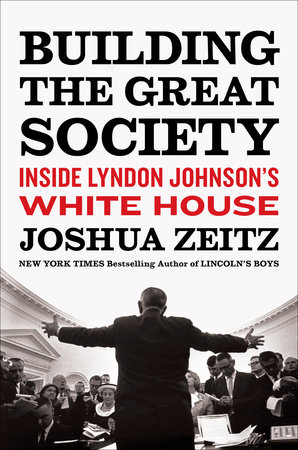 In our current atmosphere of political polarization, gridlock, and suspicion of Big Government, it has become difficult to remember that once there was a prevailing view that federal government activism is beneficial to U.S. society.

Joshua Zeitz’s new book, Building the Great Society: Inside Lyndon Johnson’s White House, attempts to fill this hole in the national memory (and serves as both sequel to and magnification of David Goldfield’s The Gifted Generation: When Government Was Good, about how government was pivotal to the economic and social advances of the early post-World War II years).

Even by early postwar standards, Johnson’s administration proved remarkably adept at turning good intentions into action through a number of bold programs aimed at eliminating poverty and racial inequality — “the Great Society.”

The authors of the Great Society sought a wholesale betterment of the country through the provision of voting rights, desegregation of schools, equal access to medical care, and the end of housing discrimination.

Although the efficacy of the Great Society is a matter of debate to this day, there is no disputing that it transformed the U.S. — most significantly by blasting away the institutionalized racism (“separate but equal”) that had been the law in large swaths of the land since the late 19th century.

Why was Johnson able to go far beyond his immediate predecessors in pushing through so many major controversial measures? Previous works have cited the shock of Kennedy’s assassination; the mandate provided by the Democratic landslide of 1964; and, of course, LBJ’s vaunted mastery of the political process.

Less examined, and the central theme of Zeitz’s book, is that not even the larger-than-life Johnson could go it alone; his success resulted from his assembly of one of the greatest White House staffs of all time.

(At this point, it should be noted that this is decidedly not an LBJ biography — of which there are already plenty — and the LBJ neophyte might better comprehend the events in Zeitz’s book with some preliminary reading about the former president’s life and times.)

The extraordinary men behind the Great Society make for a long list (if this book has one failing, it’s that it is easy to get lost in the thicket of thumbnail biographies), but some of the more notable names included Sargent Shriver, Bill Moyers, Joseph Califano, and Jack Valenti.

They may have varied in age, experience, and education, but they shared a sense of noblesse oblige, a can-do spirit, belief in the power of economic opportunity to transform American society, and, not incidentally, a willingness to work grueling hours.

Their accomplishments are particularly striking considering that virtually none of them had had time to prepare for the roles thrust upon them by the precipitous ascension of LBJ to the presidency.

At the outset, LBJ and his team knew that they had a limited amount of time to act; indeed, momentum stalled well before the end of Johnson’s presidency. The postwar economic boom faltered, the Vietnam War ate up an enormous amount of money that might otherwise have been spent at home (and disproportionately burdened the poor and minorities that the Great Society was supposed to help), and whites rebelled against programs that were seen as coddling minorities.

Such was the power of the Great Society, however, that much of it survived attempts by numerous administrations and Congresses to roll back its programs. Medicare, Medicaid, food stamps (now the Supplemental Nutrition Assistance Program), Head Start, PBS, and many other Great Society initiatives have become such an immutable part of the American landscape that it is hard to imagine life without them.

Just as importantly, as Zeitz points out, “Most people cannot fathom a world in which African Americans are denied service at hotels, restaurants, and hospitals, explicitly excluded from the workplace or the housing market, or barred from voting or holding office strictly on the basis of their race.”

That is the world LBJ and his staff inherited in the early 1960s, and it is to their everlasting credit that they had the courage and grit to take it on.

Zeitz’s book also draws pointed lessons that any administration would be wise to heed. First, of course, is the importance of good White House staff. With an eye on the current administration, Zeitz remarks that “a staff unprepared to govern, and dismissive of administrative experience and discipline, may well find itself hard-pressed to undo the work of a presidential staff that did.”

A closely related lesson is that the most effective administrations are the ones that tap into the expertise of federal agencies rather than sideline (or eviscerate) them. Then there is the role of war as a distraction from ambitious domestic programs, with Zeitz pointing out that the progressive agendas of presidents from Woodrow Wilson to LBJ were scuttled by the competing demands of foreign wars.

Finally, there is the tacit lesson that some of the most profound societal changes for the good are more likely to occur during periods of government activism than periods of government rollbacks. We are currently experiencing the latter, and it is to be hoped that Zeitz’s book can play a small role in pushing the pendulum back in the direction of the former.

Queens of Jerusalem: The Women Who Dared to Rule