North to Paradise: A Memoir

A slim, sobering tale of one man’s journey to the “Land of the Whites.” 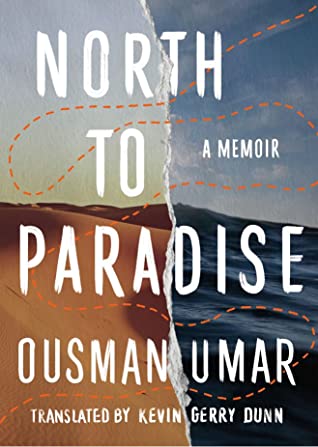 “We wanted to reach Paradise, the Promised Land. When we started out there were forty-six of us. Only six survived.” The final lines of the prologue to North to Paradise, Ousman Umar’s memoir of his journey from Ghana to Barcelona, and from childhood to young adulthood, tells us from the start that this tale of migration is both life-threatening and dream-filled.

Umar is the founder of NASCO Feeding Minds, an organization with a mission to educate young Ghanaians. His first years in his own Ghanaian village were happy, mostly, despite his mother dying during his birth, and his father — a member of their tribe’s royal family and a shaman — having a sometimes quick and violent temper. There was poverty, houses made from clay and without running water, but Umar did not go hungry:

“If we wanted to eat chicken, we grabbed one from the poultry yard…And when there was nothing else, we’d gather mangos, oranges, and all the other things that nature provides.”

His friends and he worked in the fields and played in the jungle, and in the evenings, he gathered with his family around the fire to listen to the elders tell folktales and other stories. It is from these elders that Umar first heard of the Land of the Whites, and of how whites lived like gods with riches and abundant prospects.

Movie night in the village was held once a month, and the screen images only enhanced Umar’s imaginings and dreams. When his father sent him away at 9 to serve as an apprentice for a mechanic, Umar’s journey to Paradise, the Promised Land, the Land of the Whites began.

After three years of working odd jobs in the cities of Ghana, Umar decided to migrate to Libya. The memoir is told in sections that mirror this five-year migration, and the section called “Togo, Burkina Faso, Niger” is riveting and devastating. Lured and duped by smugglers, Umar and his 46 traveling companions were abandoned in the desert with few provisions. As the prologue said, only six survived.

Their arrival in Libya, while almost miraculous, turned out not to be a significant improvement to the life Umar left behind. He was frequently homeless and hungry, often scared and preyed upon. As his journey continued over the next few years (stopping to work when he could, to make money for food and for his passage), Umar — like so many migrants in search of what they imagine a better life — crossed Tunisia, Algeria, Mali, Morocco, and Mauritania to reach the coast, where they were packed into small boats to navigate the dangerous waters to the Canary Islands.

It would take more than one attempt for the sail to be successful, and along the way, Umar would lose more companions and friends. Despite the treacherous migration, Umar survived. “At long last, I was in Paradise. When I reached the shore, I threw myself against the ground and hugged it with all my might.”

Umar eventually got the chance to live in Spain, but things were not easy there at first, either. Yet he never gave up hope. He held a strong belief that human goodness and kindness can always be found, even in the darkest of situations. He saw this in the watermelons that workers would throw over the sides of produce trucks to the hungry men walking in the road; in the offering of bread from a young woman trafficked for sex who lived in a crowded dwelling where he did; and finally, most importantly, in how a white Spanish couple was willing to help him in a remarkably generous way after he arrived in Barcelona. It is this, the eternal willingness of Umar to seek (and find) the humanity in others that gives this slim book its hope and its heart.

This five-year migration is recounted in fewer than 140 pages, and that is perhaps the slight flaw in the narrative. Much happened, but the story is too often summarized, leaving out details and important connections between steps along the way. It could be that Umar’s memories are blurred, and that so many days along the way were exactly the same as others — desert, hunger, work, fear, sea. Still, this story is an important one, and a more robust telling would help readers fully understand the complicated danger and the victorious survival all the better.

This is a story of hope, as the collection of Umar’s photographs at the book’s end illustrates clearly. Here he is as a little boy, playing with a handmade toy truck in his village. And here is a picture of dozens of migrants packed onto a small boat crossing to the Canary Islands. In a later image, he is with his adopted Spanish family, dressed in Santa hats and gathered around a table laid with a feast; later still, he is visiting his Ghanaian village as a smiling young man.

I once heard a writer say that for us to know the world more fully, we should read books by and about people who are not like us. Umar’s story, though not unfamiliar to many, is certainly not mine. And for that reason — and others — it was important for me to have read it. It is a story that others should read as well. And one we should share.

Likable he wasn’t, but who could dispute the importance of the dictionary-maker's legacy?