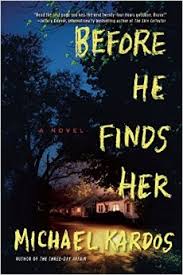 Before He Finds Her offers an interesting premise. On a Sunday night in September 1991, Ramsey Miller killed his beautiful young wife and 3-year-old daughter. However, the reader quickly learns everyone got at least one fact wrong. Ramsey’s little girl did not die. Instead, she lives a secret life in a small West Virginia town as part of the Witness Protection Program.

Going by the name Melanie Denison, the girl is now nearly 18 and bristling under her foster parents’ efforts to keep her safe. She rarely leaves their trailer. Homeschooled until her final year of high school, Melanie is finally allowed to take a couple classes at the local community college. She is denied access to the Internet at home, and cannot have a library card because of the paper trail. She lives in fear because her father, who was never caught, is still looking for her.

Melanie has her own secrets. She steals hours from her day to go online to investigate her mother’s murder. She is sleeping with Phillip, a young teacher at the high school, and is 10 weeks pregnant with his baby. Not wanting her child to share a life of secrecy, Melanie returns to the Jersey Shore town of Silver Bay where her mother was brutally murdered.

Interwoven with Melanie’s present-day investigation is the story of her father, Ramsey, with some concentration on his actions leading up to the night of the crime.

As a writer, Kardos knows how to turn out an elegant phrase or two. He tells the reader that “to call the ocean ‘blue’ or ‘green,’ to name a single color, was like defining a living, breathing human being with a single adjective.” He sums up small-town-weatherman-turned-network-television-icon David Magruder with style: “She wouldn’t call him handsome, exactly. The parts were all there: cleft chin, blue eyes, that perfect head of hair, but the parts didn’t quite fit together. It was as if he’d been ordered a la carte.”

Yet calling Before He Finds Her a “thriller” in the book description puts the novel at a disadvantage. Fans of the genre have a certain expectation: fast-paced action that propels the narrative. Readers are content with just the facts of a character’s backstory. They do not need every nuance from birth to the present. In the classic thriller Rebecca, author Daphne du Maurier does not even bother to give her heroine a name.

What is more important to these stories is the sense of suspense, anticipation, and anxiety, yet I only recall two instances where mild curiosity enticed me to turn the pages of Before He Finds Her.

Moreover, Ramsey’s story is not succinct. Instead, his life evolves in a slow ramble from young hooligan to troubled adult. The reader learns he loves his wife, daughter, and the freedom of his job as a long-haul trucker. Examining why he might have killed his spouse seems way down on the list of the novel’s priorities.

While information is withheld from the reader, there is no true mystery to unravel. Melanie doesn’t act in the role of sleuth. Her instincts are questionable since she goes in search of her father not in the last place he was seen, but the last place he is likely to be seen. The police involved in the story do little detecting. No one solves the murder. Secrets unravel when questions that weren’t asked initially are eventually put to those involved.

Ramsey is a quirky character at best, and Melanie is sweet and young but generally bland. The older boyfriend, expected baby, and restricted upbringing seem more piled on than necessary. However, underused 81-year-old blogger Arthur Goodale (aka Old Man with Typewriter) is a delight.

Kardos’ style and facility for language would be well suited to a coming-of-age novel or a family saga that isn’t hindered by constraints of the mystery-thriller formula.

Thomas N. King is a writer and editor for Maryland-based e-book publisher Arrow Publications, LLC. When not working on new releases for Arrow, he’s putting the final touches on his own fantasy novel, Thyme Travelers, the first book in a planned time-traveler series.