Beer Money: A Memoir of Privilege and Loss 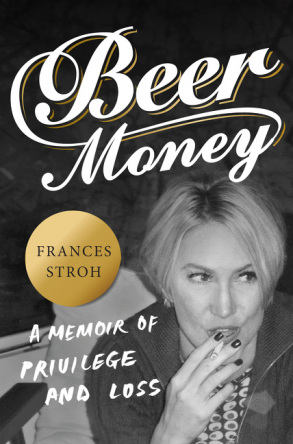 F. Scott Fitzgerald wrote, “Let me tell you about the very rich. They are different from you and me.”

At first glance, Frances Stroh’s pedigree and credentials appear impeccable. An heir to the Stroh family fortune, she was raised in Michigan’s Grosse Pointe, educated for a time at Taft School, and graduated from Duke University and the Chelsea College of Art.

Beer Money: A Memoir of Privilege and Loss reflects her family’s rarefied social and financial résumé in an effective narrative about the shared fate of the Stroh Beer Company, Detroit’s emblematic manufacturing status, and the Stroh family itself. But the economic story of Detroit and the Stroh business, while interesting, is not as compelling a read as Frances Stroh’s memoir of her family’s contorted emotional life.

The Stroh brothers emigrated from Germany in the mid-19th century to settle in Detroit. Brewers by trade, they developed a beer that appealed early to the working class and later to college drinkers. By 1984, the Stroh family business was worth $700 million, making it the richest privately held beer company in the country.

From that high-water mark, the family committed a series of stunning missteps that included taking the brand national, leveraging the future with loans and real-estate ventures, and a myopic dependence on Detroit, all the while misreading changes in consumer preferences and the competition. Grosse Pointe, a suburban enclave for the wealthy manufacturing class and the old rich, stood in stark contrast to the precipitous decline of nearby Detroit.

In a kind of social voyeurism, France Stroh’s memoir is our lens through which we observe the devastating and centrifugal forces in her family. Yet the author seems to assure us that the rich, despite all the fantasies and notions we might have about them, are as complicated, messy, and flawed as we are. Her story, then, is about a desperate and sometimes aimless search for connections of love among her family members and for meaning inside of privilege.

Central to this struggle for connection and intimacy is Eric Stroh, the author’s father. He once opined, “Happiness is not something you turn on and off like running water.” Yet, despite having the kind of substantial fortune that might have promoted happiness, he searches for that “on” spigot through alcohol, compulsive spending, and collecting.

Because of his relationship with his own father, he prioritizes his possessions (art, cameras, books, antiques, etc.) and family prestige as his legacy and, in so doing, fails to understand his destructive contribution to the emotional inheritance that outlives him in his children. “He loved the attention, the grandiosity and the elusive bit of immortality he felt when he walked into a shop.”

By contrast, his wife, Gail, profoundly affected by the Great Depression, “enjoyed the trappings of wealth but, out of a deep-seated fear of ending up poor, chose to live modestly.” Gail adopts a “life-long devotion to frugality.” As a consequence, their children, Whitney, Bobby, Charlie, and Frances, are caught in a bipolar world of appearances and a disturbing emotional reality.

Frances Stroh grows up in a life of “scripted conversation” and prescribed feelings, captured in the many idealized family photos that reflect a life quite different from its unfolding tragedies. “Scripted conversations weren’t enough to sustain any real sense of connection.” Her tale reveals underlying currents of disapproval, emotional inaccessibility, and denial that play a role, for instance, in her parents’ divorce and in brother Charlie’s inevitable descent into addictions, unemployment, and tragedy.

Stroh organizes her memoir more or less chronologically. Since father and daughter shared a love of art centered on photography, the author introduces chapters with photos taken by Eric or herself. Implicit in this presentation is Stroh’s thesis that her father’s failure to explore his artistic talents to make meaning in his life led to his failure to connect authentically with others.

In a sad irony, Eric Stroh dies with some 80 Leica cameras and dozens of boxes of photographs as unorganized as his emotional life. Through her authorial camera, we find Frances’ father in the narrative background even when she focuses on portrayals of Charlie, her mother, Detroit, or the family business. These photos and their stories “allowed ourselves to be pinned into place…and in our search for freedom, some of us self-destructed.”

Frances Stroh’s family memoir, a frequently perceptive and almost redolent novel of manners, is at its core her psychological journey toward healing and a purposeful life. Beer Money reflects a quite honest, non-self-indulgent telling of the facts of the author’s family life.

She has revealed characters with whom we are often impatient, frustrated, and dismayed. But perhaps their attraction is that, in their privileged circumstances, their losses seem somehow unfair; the Strohs should have known better even if we readers don’t. Emotional abandonment amidst wealth creates its own brand of chaos.

In the end, the author cleans out 50 years’ worth of her deceased father’s collections, most of which are valued far below his aspirations. Stroh offers that the packing up of those possessions “made me feel lighter, taking a child’s tentative steps away from her parents’ outstretched arms, the joy of walking itself my true legacy.”