Because Our Fathers Lied: A Memoir of Truth and Family, from Vietnam to Today

A son wrestles with the horrible legacy of a pointless war. 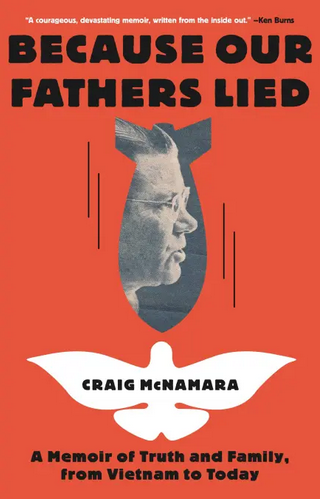 Books about fathers and sons are minefields of resentment, anger, and unexpressed emotions waiting to explode, sometimes in dramatic ways. So it is with Craig McNamara’s Because Our Fathers Lied. The title says it all. The author’s father was Robert McNamara, chief architect of the war in Vietnam, a conflict second only to the Civil War in dividing Americans in ways that linger yet today.

The book meanders through Craig McNamara’s childhood and youth as he painfully and explicitly details his attempt to come to terms with a father who became one of the most despised men in the country, perhaps even the world.

The Vietnam War’s official dates are 1961 to 1975. Vietnam, a former French colony, became the flashpoint of the Cold War during the 1960s. All told, the war cost over 58,000 American lives and, by many estimates, the lives of millions of Vietnamese.

It was a classic case of throwing good money after bad, except that it was human lives. As the conflict escalated, Robert McNamara, as secretary of defense, knew the effort was futile yet continued to send U.S. soldiers to die in the jungles of Southeast Asia. For an entire generation of veterans, including me, it was unforgivable. And so it is for Craig McNamara, the secretary’s only son:

“He never told me that he knew the Vietnam War wasn’t winnable. But he did know, and he never admitted it to me. More than a decade after his death, I still wonder why he was no more honest with me than he was with the American people.”

Robert McNamara came to the Kennedy Administration from the Ford Motor Company, where he was credited with reviving the auto giant. He was one of JFK’s “whiz kids,” brainy and Ivy League, with modern ideas. He wore severe wire-rimmed glasses, his hair hard against his skull, combed straight back and parted in the middle. He was distant in a cold, emotionless way both to the American people and to his family.

Robert McNamara’s visits to Vietnam during the war produced a pile of “souvenirs” at home; Craig had captured Viet Cong flags in his bedroom. His life was spent navigating a tense middle ground between loving a father he couldn’t understand and living with an engineer of massive suffering and unnecessary deaths.

The McNamaras hiked and skied and camped and enjoyed a privileged life in a fancy Washington, DC, neighborhood. Craig was a teenager during the war; he knew his father was hated by masses of young people who did not want to die needlessly in Vietnam.

The dyslexic Craig went to a New England boarding school, where he did poorly. He concedes that he got into Stanford on the strength of his father’s name. While there, he took part in anti-war demonstrations, even breaking a few windows. He grew his hair long and sported a beard. He later went to Chile to learn farming. At one point, he lived in a cave on Easter Island, locally known as Rapa Nui. Wherever he went, Craig grappled with the reality that his father was seen by multitudes as a war criminal:

“It takes a person with a certain misplaced strength to continue along a path that causes suffering and destroys lives — to know the costs and to continue all the same.”

Eventually, Robert McNamara, who went on to helm the World Bank, wrote a book in which he admitted that he knew the Vietnam War was unwinnable long before it became a national nightmare. It was an admission that still sickens many of us.

At one point, Craig asked his father why it took him so long to tell the truth. “Loyalty,” he replied. “I made mistakes.”

Robert McNamara left the Department of Defense in 1968, having served Presidents Kennedy and Johnson. During his time in government, he also took a small guerrilla campaign in which American advisers were helping the Vietnamese in their fight against Communists and turned it into a bloody, obscene war that tore our nation apart. And it all ended in defeat. How does one process having a father like that?

Craig McNamara, today a walnut farmer in California, is still trying to answer that question. He’s an old man now.