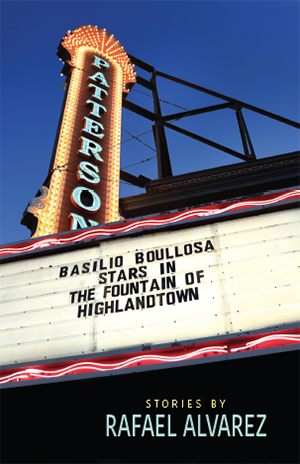 I grew up in Richmond Hill, a working-class neighborhood in Queens whose residents liked to boast that they were middle-class. It was a community of Italians, Jews, Puerto Ricans, Lithuanians, and others, all immigrants or second- and third-generation Americans, all mixed together in a salad bowl of cultures that struggled to maintain their traditions as best as possible.

There were Jewish neighborhoods, Italian neighborhoods, African-American neighborhoods, etc.; somehow, we all got along in our daily lives, mingling in area restaurants, bakeries, and butcher shops, yet maintaining our very distinct identities. In short, it was a life that many outside of big East Coast cities could never imagine or feel comfortable navigating.

Rafael Alvarez’s Basilio Boullosa Stars in the Fountain of Highlandtown is a collection of short stories stitched together to read almost like a novel that captures the very essence of that ethno-urban experience.

Set in mid-20th-century Baltimore, it follows the life of Basilio Boullosa, whose paternal grandparents hail from Spain and Italy and whose mother is of Lithuanian descent. Through his eyes, we experience the hopes and dreams, the ups and downs, the tragedies and joys of the characters who populate Highlandtown (or, as Basilio likes to call it, the Holy Land,), a section of downtown Baltimore made up of wharfs, rowhouses, and factories.

Basilio Boullosa is nothing if not authentic. Basilio, the hero of these stories, is a would-be artist who sketches on anything from pennies to canvas and who paints crabs on the sides of seafood trucks just to get by.

Through him, Alvarez crafts a picture of a once-bustling neighborhood of immigrants who survive by blue-collar labor (shucking oysters, working in the shipyard) and who cobble together lives made up of modest homes and rich memories of the old country.

Eventually, however, Highlandtown loses its luster. As one generation leads to the next, the area becomes rundown, the factories begin to close, and the immigrant dreams start to crumble, leading to disappointment and despair as a life with echoes of the old world slowly slips away.

Soon come the 1970s and, with them, cultural change — the Beatles populate the national conscience, the drug culture arises, and this once-Catholic enclave transforms into a slum filled with drugs, whores, and the homeless, eventually replacing the wonder days of old with a new and stark reality.

But Basilio Boullosa isn’t just a story of immigrants and their families. It’s a story of change, a story of people clinging to their past. (Basilio’s grandfather, a jaded old man, hoards memorabilia, lives out of the first refrigerator he ever owned, eschews the present, and secretly longs to return to his former life and his wife, whose “hair was black, black as an olive.”)

At the same time, it’s a story of people caught in a time warp trying to reclaim a past that no longer exists, people wishing to escape from a life in which they’re now trapped. The characters become stuck, finding release only with pills, booze, and sex, or through remembrances of things past — a time that was filled with family, friends, and a strong sense of community.

This sense of hopelessness is just one of the things that makes this book so real. But more than that is the way Alvarez shades the environment and fills it with characters who are both vulnerable and affable. Like Basilio, Alvarez’s palette is rich and colorful, and the characters and scenes pop out almost in 3D:

“It was cold enough for the fish to sit in the back of the car while Grandpop indulged Basilio in a visit to Kramer’s, the candy store on Eastern Avenue where corn popped in the front window and a fan pushed the scent of hot caramel out onto the sidewalk. The scent was the only advertising Kramer’s ever did: caramel and fresh popped corn mixed with the clean, brisk wind and the snow as Basilio walked inside with his grandfather.”

Basilio Boullosa is a must-read for those who grew up in evolving neighborhoods, for immigrants who strive to understand the new life they are creating for themselves and their children, and for anyone who wishes to comprehend the forces that have helped fashion the country we call America.

Mike Maggio’s novella, The Appointment, was released in May 2017. His website is www.mikemaggio.net.