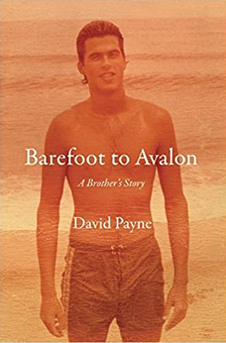 When my brother was a senior in high school, he threatened to jump out of a classroom window. That was his first breakdown, the first of many episodes of potential self-harm, highs and lows, and dozens of hospitalizations. Still, it would be decades before he’d be diagnosed with bipolar disorder.

For the family of a mentally ill person, a false relief can come with an official diagnosis. The relief doesn’t last. Why, we soon wonder. Why him? Why us?

In David Payne’s intense, painful, and beautifully rendered new memoir, Barefoot to Avalon, we know early on that his brother, George A., diagnosed with bipolar I disorder, has died in a car accident during a move across states. David, in a rental truck, watched through his rearview mirror as the SUV his brother was driving flipped over. All the while, David was saying to himself: “No, huh-uh, no, no.”

This, Payne’s sixth book of prose and first memoir, is subtitled A Brother’s Story, and though the tragic end of George A.’s life propels this story, it is, in fact, the saga of the brother left behind.

“What happened to us,” wonders David, “what is the nature of the dark force? For me this has always been the overwhelming question, and I set out to tell the story not because I understand it but because I don’t and want to.”

What did happen? How did David get here, alive and too often drunk and lost in the pages he writes?

The story is built like a labyrinth. Memories and experiences are pathways leading into and out of others, deftly moving the reader forward and back in time. George A. is always there, in their close-knit childhood and then on the periphery after David leaves home, first for boarding school, then college, then New York, then Vermont.

David sees his brother at family gatherings and on the devastating occasions when George A. breaks down. The two most significant of the breaks are the first, a hospitalization in 1975 before an important football game at which most of the family is expected, and “the biggie, where [George A.] strips and shreds his credit cards and announces that he’s been tapped out for a mission to Tehran to rescue the hostages at the embassy.”

George A.’s breakdowns are like cairns; David writes the rest of his story around them, circling them, returning to them, studying them from different angles. We are told of the early sibling rivalries, including the daily barefoot run the brothers make when David is 20 and George A. is nearly 17, the one to and from the pier at Avalon that inspired the book’s title and that George A. wins eventually, finally, just weeks before his first breakdown.

David examines these rivalries for clues to the nature of the dark force, and he plumbs his family’s history. There is evidence of despair here: suicides, obsessions, unbalanced acts. Dreams are deferred.

Margaret and Bill, David and George A.’s parents, married too young when Margaret got pregnant. She tells David later that she thought Bill might become a scientist who discovers the cure for cancer or the president of the New York Stock Exchange. What Bill did become was a truck driver for Margaret’s father’s oil company. He also became a drinker and a gambler, and after the couple divorce but before Bill’s violent, self-inflicted death, he became a sort of junk and treasure vendor traveling backroads in a truck.

Years after his brother’s accident, we see David in his own home. “Who are you?” His wife’s look says when he has an explosive quarrel with his 6-year-old son. “What’s wrong with you? What happened to you in your childhood?”

At 13, David is accepted into prestigious Exeter, and on the road trip to school, he bears close witness to the brutality of his parents’ relationship. The three share a room in Boston; David wakes up to their fighting, to his mother running across the room, to his father naked and staggering after her. When Bill passes out, Margaret fixes her face and takes David’s cheeks between her palms and says she’s sorry, but she must leave. And David says, “I know. Go, Mama.”

This is what happened to David in his childhood.

In breathless, urgent sentences, David tells as much of his brothers’ story as he can. He and George A. take different paths through adulthood: David writing, living a literary life; George A. becoming one of the youngest, most successful brokers at major financial firms. Margaret marries a second time, a man with adult children of his own, including a son who is a thief and a daughter with whom David has an affair.

Never in this memoir does David cry victim. He is not even particularly sympathetic. Better — truer — than that, he knows he is complicit in bad acts, and that his choices are often wrong ones. Like when he stops to buy a bottle to replace the one he’d poured out hours before, promising himself to be done with drinking. Like when he decides that he and George A. should get on the road during the move from Vermont to North Carolina too late in the day when George A. is tired, the smudges under his eyes and his slept-in clothes indications of his frailty.

That David cuts himself no slack, and boldly, unflinchingly tells his own faulty story is remarkable. It is akin to his glancing back over and over in the rearview mirror, keeping an eye on his brother in his SUV even as things go wobbly and then tragic, mumbling “No, huh-uh, no, no.”

David (like many of us with mental illness in the family) does not get much closer to understanding the “nature of the dark force.” He has asked many questions, and in some cases, finds answers. The end of the book is like the end of a race. To Avalon, say. David stops. Panting, yes, but finally standing still.