Autumn of the Black Snake: The Creation of the U.S. Army and the Invasion That Opened the West 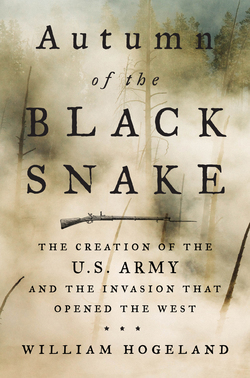 After the Treaty of Peace of Paris ended the Revolutionary War and launched a nascent republic, victorious Americans of all stripes eagerly looked west, beyond the Appalachian Mountains, to expand what Thomas Jefferson dubbed “the empire of Liberty.”

Once the Constitution was ratified and the framework of government secure, the process of western settlement began in earnest. As it did, however, in 1791, the forerunner of the U.S. Army — under the leadership of General Arthur St. Clair — met a disastrous defeat on the banks of the Wabash River.

So badly were the Americans mauled by a confederation of Indian tribes that the battle doesn’t even have a name. It was the worst defeat by Indians in American history, dwarfing the Battle of Little Big Horn 85 years later. But like that pyrrhic victory for the Plains Indians, this defeat would have longstanding implications for the victors. A battle may have been won, but a culture would soon be lost.

When news of the route reached President George Washington in Philadelphia, he could barely contain his anger. Ever the adroit politician, Washington used St. Clair’s misfortune as a means of sidestepping opponents of a standing army and created a fighting force that could subdue the native peoples of the Northwest.

In Autumn of the Black Snake, author William Hogeland does a fine job of bringing this untold tale of the U.S. Army’s birth to life. Like all good historians, he places the story in context, going back to Washington’s youth and chronicling his encounters with the natives of the Ohio River Valley in the years before the French and Indian War. The conceit works well, as it allows the reader to grasp just how complex that conflict was for Indians, who at the time were caught between the worlds of the Colonial French and British.

During the War for Independence, most tribes sided with Great Britain. They could foresee that an American victory would lead to a massive encroachment on their lands. After the French and Indian War, England had lain down the Proclamation Line of 1763, forbidding colonial settlement west of the Appalachians. It was, at best, a feeble gesture.

With America’s final triumph over Great Britain in 1781, the path to westward expansion was cleared. Hogeland notes in his conclusion, “In the summer of 1795 American flags were waving high over forts throughout the Northwest Territory, thanks to [General] Anthony Wayne and his legion…when he won the Battle of Fallen Timbers, fewer than 5,000 white people were living in what would become the state of Ohio. Less than 15 years later, 230,000 would live there: a decade later more than twice that.”

This well-told tale takes readers to the events that concluded with the seminal American victory at Fallen Timbers — including the backroom sparring between the executive and legislative branches of the government, and the internal struggles of an Indian coalition desperate to fend off American encroachment. It’s an intriguing saga of double-dealing, limited diplomacy, and strong personalities on all sides.

While not heavy on troop movements and battle tactics, the book describes the close-quarter fighting in fascinating (if grim) detail. Here, Hogeland’s writing shines as he brings the unleashed energy of combat to life. Adding to the suspense, he keeps hidden the meaning of the book’s title until close to the end.

For any reader interested in early American political or military history, Autumn of the Black Snake would be a good addition to their bookshelves.

James A. Percoco is the teacher-in-residence for the Civil War Trust. He is author of Summers with Lincoln: Looking for the Man in the Monument (Fordham, 2008) and is a member of the national Teachers Hall of Fame, Class of 2011.​