A detailed if not altogether necessary new history. 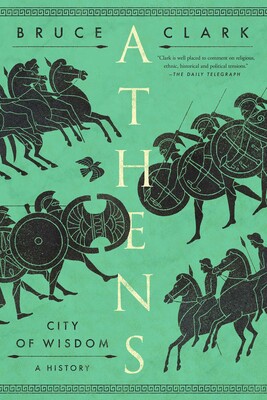 During a brief period of peace in the 5th century BCE, the ancient Greek city-state of Athens “brought us democracy, science, philosophy, written contracts, taxes, writing, and schools,” in the words of Eric Weiner. No civilization has ever had such a profound and lasting influence on the Western world. In our own country, something of a vogue for all things ancient Greece after the Revolutionary War inspired our form of government, the architecture of our capital city, and a plethora of towns called Athens, Sparta, and Corinth.

Enduring fascination with Athens is evinced by the myriad books about it. This raises the question of whether we really need one more. In the case of Bruce Clark’s Athens: City of Wisdom, the answer is: maybe. While Clark may do a service by detailing often-overlooked aspects of Athenian history (e.g., medieval times), his book is a bit of a lift: very long on description, and short on telling us why it all matters.

At the outset, Clark leaves unanswered the most important question about ancient Athens: how it came to reject the model of authoritarian monarchy that prevailed at that time and opt for democracy instead. This development was nothing short of miraculous, but Clark simply observes that Athens, from an early stage, “had robust institutions designed to accommodate the interests of several parties,” and moves on.

The author’s nods to interpretation consist primarily of one-sentence comparisons — e.g., ancient Greek dynasties being akin to the Kennedys or Bushes; ancient Athens being similar to today’s Gulf states; the year 431 BCE (when the Peloponnesian War broke out) being like 1914, and so on. These are not particularly illuminating.

It’s a shame that Clark makes only cursory note of the Melian dialogue (from Thucydides’ History of the Peloponnesian War), because so much of Athenian history can be interpreted through the lens of the reversal of fortune that befell the city shortly thereafter. In the dialogue, powerful Athens tries to bully the inhabitants of the small island of Melos into joining the Athenian side against Sparta by stating that “the strong do what they can and the weak do what they must.” When Melos demurs, Athens effectively wipes it off the map, then loses the war and is occupied by Sparta.

The irony is that for much of the time since, Athens has been Melos: doing “what it must” under a range of occupiers (the last being Nazi Germany during World War II). Even as an independent country in the present day, its economic and monetary policies are to a great extent dictated by the European Union, and it is dependent on the Chinese to run its port of Piraeus.

To be sure, many of these outsiders were also admirers of ancient Athenian culture, something of a dual-edged sword. On the plus side, it is thanks to Alexander of Macedonia — who propagated Greek culture (“Hellenism”) throughout his empire in south Asia — that Athenian achievement became known outside of ancient Greece rather than be lost to history.

On the other hand, outsiders seeking to “restore” ancient Athens in terms of physical plant — not so much its political or philosophic ethos — led to the creation of an Athenian “upmarket theme park…[where] one monarch after another, from Anatolian despots to Roman aesthetes [tried] to put a fresh stamp on the place.” Actual Athenians had little voice in the matter.

An echo of this dynamic occurred in the 19th century when, following Greece’s independence from the Ottoman Empire, western Europeans took it upon themselves to “re-Hellenize” Athens by stripping away the Byzantine, Frankish, and Ottoman influences that had taken hold over the centuries. This meddlesome spirit extended to the selection of Greece’s monarchs — who, perhaps not coincidentally, were deposed with some frequency.

But while Athens was being put on a pedestal, it was Constantinople that was regarded as “the hub of a multinational but Greek-flavored empire.” Many Athenians shared this sentiment with the enormous number of Greeks who lived in what was then the Ottoman Empire.

This Greek diaspora, in fact, spurred longstanding dreams of a “greater Greece,” with Constantinople as its capital. Athenian hopes of occupying Constantinople collapsed after World War I, however, and Greece suddenly had to absorb a huge influx of refugees who had been forced out of the former Ottoman Empire:

“Instead of planning ambitious expeditions to the periphery of Hellenism, politicians in Athens had to cope with feeding and housing the tattered remainder of that periphery on their own doorstep.”

Clark often appears unable to find something to say about this period in which the Greek world shrinks, as evidenced by the number of pages devoted to Athenian urban planning. He forges on, nevertheless, through the rise of communism, the plight of Greece during WWII, dictatorship from 1967 to 1974, the 2004 Athens Olympics, and the Eurozone crisis.

The book also lacks a definitive conclusion, with Clark seeming to cite openings of new boutique hotels, fusion restaurants, edgy art galleries, and airport upgrades as signs that the city is back. Or perhaps, in putting so much emphasis on tourist facilities, he is acknowledging that Athens will continue to get by as it has for millennia: by letting outsiders partake of its past glories.

Elizabeth J. Moore is a freelance writer in the Washington, DC, area. She was a longtime senior analyst and instructor with the U.S. government, including tours at the Defense, State, and Treasury departments, on the Office of the Director of National Intelligence’s President’s Daily Brief staff, and at the National Security Council, the National Intelligence Council, and the CIA. She holds a master’s degree in international politics from American University.