The Given World: A Novel

In this tale featuring a keen-eyed protagonist, there’s no place like home. 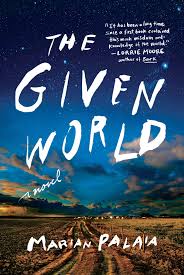 In The Given World, the debut novel by Marian Palaia, Riley is on a search-and-destroy mission. Her beloved brother, Mike, a soldier and “tunnel rat,” went missing during the Vietnam War, and young Riley is desperate to find him. Or, at least — as Riley can barely admit to herself — to find out what happened to him.

Over the years, Riley wends her way from Montana to Saigon, making a few stops in between, all the while accompanied by a loud and edgy 70’s and 80’s soundtrack.

The destroy part is in the quotidian details of her journey because, in fact, Riley is hell-bent on self-destruction. As in Robert Stone’s Dog Soldiers, Vietnam’s tragedy is found in the ragged aftermath of the fighting. Unlike Dog Soldiers, this PTSD is the type suffered by those who did not serve, those who were instead left behind.

Over the 25-year span of this slim, dense novel, Riley leaves her family and hooks up with men who love her and men who don’t quite; her list of ne’er-to-be-fixed relationships is as long as the book itself. She has and then abandons a baby and supports herself with a series of numbing jobs, including delivering newspapers and tending bar, all the while addled by drugs and alcohol. The cast of characters she meets are as broken as she, and similarly desirous of finding, well, something.

Riley is kind of a feral narrator, uncultivated and short on education and oddly, for a drifter and survivor, lacking in street smarts. Nevertheless, in writer Palaia’s loving and capable hands, she is blessed with a vast and preternatural intelligence. I can’t say if the writer counted on this as a point of narrative tension, but the reader waits for Riley’s actions and decisions to equal that intelligence. Which usually doesn’t happen; she is a mistress of poor choices.

Instead, the reader’s payoff is found over and over again in Riley’s acute observations of all that searching, disappointment, and moving on. Palaia’s prose is acrobatic and elegant. For example, when Riley talks about what we talk about when we discuss growing up, she observes that her parents “saw [her] orbiting a little close to the sun, but they didn’t try to talk [her] down, probably because they knew they couldn’t.”

Or, when she pushes off from yet another relationship: “Ed kissed my forehead and told me he still didn’t think I was crazy...Halfway down the mountain, I felt something snap inside me like a shredded fan belt when it finally lets go. It was a strange feeling, but it didn’t hurt like you might think it would.”

Palaia, a prizewinning author and Steinbeck Fellow, slathers these pages with her gift of language, sentence-making, and wise observation. Everything that I read for. But I kept thinking (and I categorize this as a small quibble) that if I were her editor, I would tell her she could use a bit more mindfulness of her reader, a little more clarifying exposition of Riley’s demographic. Riley’s journey, and that of some of her buddies, is often too closely told, with precious little clarifying exposition while chock full of insider language (e.g., “rez-bred” and “33 beer”).

Rez, it turns out, refers to a reservation, but I’m still not sure about the beer and a dozen other references. It shouldn’t always matter, but the density of this novel has an aggregate effect, particularly when the reader works a little hard to begin with.

Palaia does, wisely, break up Riley’s narrative with additional characters’ points of view, including that of Riley’s mother. In those chapters, the reader finds a little relief from the psychic intensity.

The Given World is a world of pain and nihilism. More than a few times, I wished Riley would have tapped her heels together three times and transported herself home. Let me correct myself: I wished that she would have wanted to tap her heels and transport herself home. However, by the end of the story, I am happy to say that Riley begins to find where her heart is — or, at least, that she still has an intact one.

Risa Miller holds an MFA from Emerson College and is the author of two novels, Welcome to Heavenly Heights and My Before and After Life. She is a recipient of the PEN New England “Discovery” Award. She teaches fiction writing at Emerson College.

The Cabin at the End of the World