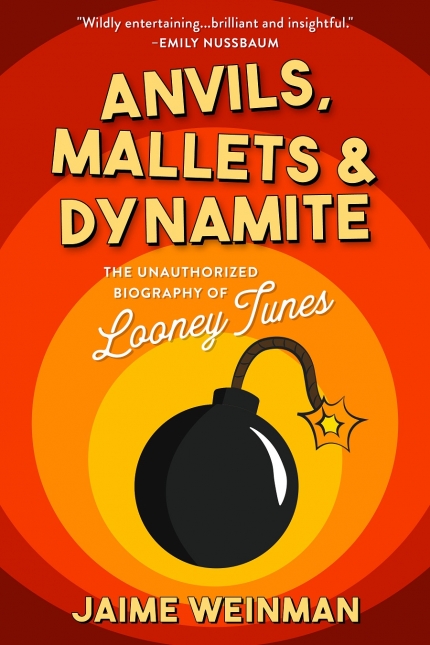 Animated films have been around since the late 1800s, if you include the prolific Georges Méliès’ stop-action special effects and labor-intensive hand-painting frame by frame. This neo-romantic Frenchman, flamboyant colorist, and fantasist certainly qualifies as a mainstream figure in early film history.

On the conventional animation front, Walt Disney, in step with a raft of other early animators, introduced Mickey Mouse in 1928. When Leon Schlesinger founded his own animation studio in 1930, he rolled out the first Merrie Melodies and Looney Tunes cartoon shorts. A few years later, Warner Brothers brought the Schlesinger team under its wing, and the nearly two-decade ascendency of these hallmark cartoon series began, only to fade into the banal crowd as TV sucked up most of the mass audience’s attention.

In Anvils, Mallets & Dynamite, Jaime Weinman, scholarly and thorough, traces the evolution (and decline) of these two pop-culture brands. His is a devotee’s single-minded attention to detail and historical context. Call him a ‘toon nerd in the very best sense; his enthusiasm and dogged fascination underline every paragraph.

Weinman profiles all the key human players in the Looney Tunes story with wit and respect for the art, and notably for the talented handful of iconic Warner Brothers’ animation directors: Tex Avery, Chuck Jones, and “Friz” Freling. He also pays attention to this A-team’s leading rivals in the eccentric packs of other studios. Along the way, Weinman unspools a wealth of compelling anecdotes, displaying unfailing insight into the style and structure of the cartoons themselves. He proves both a sensitive critic and an adept chronicler of an important American cultural moment.

It’s with these Warner Brothers cartoons that this reviewer’s wonderment with popular American film begins. This infatuation reaches back to Saturday afternoons, mid-1950s, to a throwback movie palace in North Jersey, a rapt kid down front in a massive auditorium encrusted with fading ornament.

If you’re only conversant in Bugs and Porky, Tweety and the Roadrunner from narrow-gauge TV reruns, Weinman’s apologia is likely a headscratcher. But if you’re of a certain age, you know how it was. Forget the ho-hum broadcast domain of Fred Flintstone and Scooby-Doo. Those more recent phantoms, however colorful, can never match the experience of the big screen.

Back then, with the Warner cartoons, it was a matter of overreaching hue and scope, of soaring, knock-your-socks-off backdrops awash in muted color — cityscapes, deserts, barnyards, woodlands. It was the pitch-perfect voicing of Mel Blanc, the lushly overstated musical orchestrations, and the incessant blackout sequences of failed pursuit, never-say-die pursuers hoisted on their own petards.

And, yes, there was the hyperviolence, too, fetchingly magnetic to us 8-year-olds.

Along with this violence, the stereotypical (most would say racist) treatment of characters both human and animal is where some of today’s misgivings about these cartoons originate: the Mexican Speedy Gonzales and the compulsively womanizing Pepé Le Pew, that French skunk. Also, in Tweety turning broad-brush Chinese in physiognomy as his script demanded, or in the buck-toothed, bespectacled Japanese characters portrayed during the WWII years. And, perhaps most offensively, in the wide-eyed, slouching Black characters depicted in menial roles — chauffeurs, railroad porters, street sweepers — across the decades.

Although Weinman pays necessary critical attention to each of these stereotypes, it should be said that the American film archetype in the 1930s and 1940s rather joyously embraced this same approach to characterizing diversity. I still flinch a little, having come of age as a real-world representative of the slur, when an Irish tippler teeters onscreen in a John Ford or Howard Hawks film.

But violence and racism aside, these Warner Brothers cartoons, along with Disney’s more pristine full-length prototypes pre-1950, set high standards for all serious-minded animation since — from “Shrek” to “The Simpsons” — and for certain live-action comedies, too. Consider Frank Tashlin, former Looney Tunes maestro turned Hollywood director, with his brace of over-the-top 1950s-era social satires (“Will Success Spoil Rock Hunter?”) and half-dozen celluloid cavalcades of oversaturated sight gags for Jerry Lewis.

The apple, I suppose, doesn’t fall far from the tree…where, in keeping with Looney Tunes convention, it knocks out Wile E. Coyote in a cascade of tiny stars. Then, a beat or two later, the tree itself falls, flattening the furry villain in a musical cacophony. Fade to black…

The story of the maple syrup industry told within the boundaries of one year, one harvest, and one family.