The famed author ponders the fate of two cultures in her poignant seventh novel. 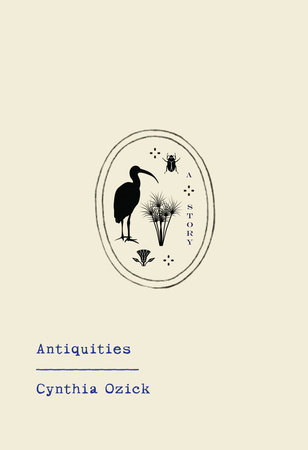 What gains in importance as a life nears its end? What memories remain? The distinguished novelist and critic Cynthia Ozick, now 93 herself, contemplates the answer in her brief and elegant seventh novel, Antiquities.

Ozick’s 70-year-old narrator is one Lloyd Wilkinson Petrie, an upper-class curmudgeon and the living image of midcentury American WASP privilege at the time of the novel, 1949. He is also one of Ozick’s few non-Jewish protagonists. A wealthy widower, retired from his Manhattan law firm, Lloyd is living on the grounds of his childhood Episcopal boarding school, Temple Academy for Boys. So are six other rich, irritable, aging trustees of the now-defunct school, whose charter granted them lifetime residency.

The novel is a diary, recalling (for an unofficial “history” of Temple) a fleeting friendship Lloyd cultivated at school and chronicling his current squabbles with his cronies.

The boy he befriended was a frail, itinerant, foreign-seeming, apparently Jewish boy, fantastically called Ben-Zion Elefantin. He appeared at school one day in 1891, moving into the dorm room across the hall from Lloyd’s. Lloyd was 10 years old and grappling with his neglectful father’s recent death. Ben-Zion was an oddity at Temple, which had just begun to admit a handful of Jews.

The boy refused to attend most classes, take off his skullcap, or eat the school food, subsisting instead on bread, milk, and hardboiled eggs. He was an instant pariah among Lloyd’s peers. So was Lloyd once he and Ben-Zion began to spend afternoons together. Yet for Lloyd, the strange boy came to inhabit and embody what was probably the single period in Lloyd’s life when he wasn’t lost and lonely.

Lloyd and Ben-Zion had certain things in common: They were unathletic; they loved chess; and they were essentially orphans, although Lloyd’s mother was still alive, and Ben-Zion claimed to have parents who wandered the world and traded in Levantine antiquities. (“My parents are in truth pilgrims in search of a certain relic of our heritage — this significant thing,” Ben-Zion confided to Lloyd.)

The boys played chess in Lloyd’s room, listening to their classmates practice football in fields outside, and one afternoon, dazed and familiar, they slipped to the floor and lay tangled together, murmuring secrets and drifting off to sleep.

Most binding — so thought Lloyd — was a connection they had with Egyptian artifacts: Ben-Zion because his progenitors had built a sacred temple on Elephantine Island in the Nile during the Exodus of Moses and had been removed as heretics from the chronicles of Israel as a result; Lloyd because the chief adventure of his father’s life had been a headlong flight from his brand-new wife to an Egyptian archeological site directed by a famous cousin, Sir William Matthew Flinders Petrie, in 1880, during the pillaging age of Schliemann and the Egyptologists.

Still, Lloyd eventually shows Ben-Zion the sundry small objects his father had carried home. Without malice, Ben-Zion pronounces them worthless. When Ben-Zion examines Lloyd’s father’s most treasured item, however — a small, pagan, stork-like figure that Lloyd, lying, pretends his father found on the soil of Elephantine Island itself — Ben-Zion cries out: “Abomination!”

In the stops between his efforts to reconstruct the dignity of the Jewish boy of 60 years before, Lloyd chronicles his fellow wizened trustees — cruel children once again — quarreling, wilting, and dying: the last of their kind. In her singular way, Ozick shows us, startingly and poignantly, the waning of a WASP tradition that she suggests was paper thin and possibly meaningless all along.

The last few sentences of Antiquities are stunning. Lloyd writes in his diary: