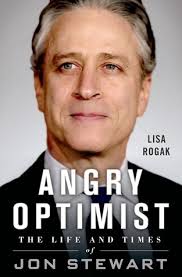 At some point in the late 1970s, smart-alecky teenager Jonathan Stuart Leibowitz flips on some New York radio station. Bruce Springsteen comes blaring out and all that passion, fire, and teenage angst reaches out and touches this kid somewhere in the swamps of Jersey. “We gotta get out while we’re young…someday girl, I don’t know when gonna get to that place where we really wanna to go and we’ll walk in the sun...”

Made an impression on the kid.

Decades later, famous and fabulously successful TV star Jon Stewart thanks Springsteen “from the bottom of my heart for giving me something to put into the dashboard as I drove a U-Haul van through the Holland tunnel,” helping Stewart steel himself to “take a chance…to get away from your circumstance…make something better of yourself.”

Charming story. Thing is, Lisa Rogak’s lazy, lukewarm, surface-skimming bio of this zingy pop culture personality tells us nothing of this, other than Stewart thanking his “beloved” hero many years later. Those Springsteen lyrics? I’m just assuming these lines resonated with young Jon. Rogak doesn’t choose to go any deeper, to see what rocked Stewart’s soul — other than being the funniest kid in class and his rage at his father. More on this later.

Veteran author Rogak has written a slew of books — mostly bios, quirky nonfiction stuff, even a novel. Notably a biography of Stephen Colbert — clearly, she’s got a good thing going with Comedy Central. Versatile, skilled, professional. And she’s got a great website, fizzing with personality and charm. Her site’s vintage-library-card-catalog look and feel throws down a winking gauntlet, daring the visitor — just try and not like me. Hard to do.

So where is all that charm, fizz, and humor in this bio of Jon Stewart? He, possessed of large quantities of charm, fizz, and humor, he who is welcomed nightly into all manner of digital high-def media across America, and yet we’re presented with blandly mild quotes from “current and former colleagues.”

Weirdly flat, maybe even a bit boring…dare I say, skimmable? Rogak is clearly funny and charming, but not here. It’s just the facts ma’am, presented in trudging chronological order. Chapter 1. Chapter 2. Chapter 3. Anyone for zippy chapter titles? Stewart is a comedian, you know.

No Moment of Zen. Not even close.

To wit. Rogak writes, “He also cut off all contact with his father, refusing to have anything to do with him. Jon’s rage was only fueled by his prodigious reading habit, particularly science fiction novels by Kurt Vonnegut and Aldous Huxley.”

But that’s it. She moves on. Yes, by this time in her dreary narrative, Rogak has told us a bit about Jon’s disdain for his father who left town, abandoned the family. But how about asking, hey Jon, tell us more about that, that thing with your dad. And these books — which were your favorites?  Rogak is writing a biography — isn’t she a little curious? Willing to go a bit deeper?

No, nothing. Here’s the thing — she apparently had no firsthand interviews. Nowhere does the accompanying PR say anything like “with unlimited access,” or touting in depth, hard-hitting chats with her subject. Just “drawing on interviews with current and former colleagues.” She relies entirely on secondary sources, albeit with lots of well-documented notes. What, no access to the man?

And then Rogak confesses, “This biographer will tell you that yes, it’s been a challenge to research the man. Not only does Stewart keep a low profile whenever he’s not toiling away at the Daily Show studios, but his friends and colleagues are equally closemouthed about disclosing any quirks or stories about the man.”

And this is the introduction.

Uh-oh. Buckle down. We’ve got a couple hundred pages to go — of folks not being terribly willing to disclose quirks. Beginning with high school. Then college. Then stand-up. And on.

Don’t get me wrong. There are fun tidbits. Like this one:

“Once he got past the first year, Stewart said it helped to think of the show as doing a 22 minute stand-up routine, where the goal was to fit 20 good jokes into each episode. He admits that’s what makes it relatively easy. “The concept is to come up with a wisecrack every 45 seconds, which is the only thing I’ve been trained for.”

Or this one: Colbert is a nice guy, a rarity in comedy.

But Jon Stewart? Just a guy from Jersey.

Spoiler alert — here’s the end of the book:

“In all honesty, I love the Jersey shore. The one thing I did that was great was I moved from Trenton, New Jersey to New York and become a comedian,” he said. “And the one great thing I’ve done is try.”

Is it too much to ask for us readers to get a chuckle or two every, say, 20 pages or so? Springsteen and I would’ve liked that.

Barry Wightman’s novel Pepperland, a revolutionary, technology, rock-‘n’-roll love story, was published in 2013 and won a Silver IPPY for best fiction from the Independent Publishers Book Awards. Besides being fiction editor for the literary journal Hunger Mountain, he’s still trying to figure out the chords to old Kinks songs.