Angels at the Gate

This fantastic novel about Lot’s pillar-of-salt wife is much more than a simple retelling of the biblical tale. 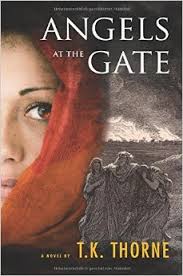 The publisher bills Angels at the Gate as the story of Lot's wife — you remember her; she turned into a pillar of salt when she looked back to watch the destruction of Sodom and Gomorrah. While there is more to Lot's story than that little vignette, the portion of his life that most people remember is told, incest and all, in Genesis 19, so I'm not going to repeat it here.

(If you don't have a Bible in the house, get thee to the Internet and the Bible Gateway, where you can pick your favorite translation and search by chapter, verse, and keyword.)

But calling Angels at the Gate "the story of Lot's wife" is woefully misleading, for although that tale is woven in, this is far more than a retelling of one of the Bible's weirder stories. It's a terrific yarn composed of brilliant world-building, clever extrapolation, and fascinating characters.

There's also a perfectly charming saluki, a hound. (Since I'm a dog person myself, the saluki Nami's presence automatically upped my rating of the novel.)

It's amazing how difficult it is to write a review of a terrific book. Reviews of terrible books are like shooting ducks in a barrel (to mangle a simile) — for historical fiction, one has merely to list the anachronisms (tomatoes in ancient Egypt; potatoes in 1066 England; plastic bags in 1940s anywhere), just for starters.

Since this novel, T.K Thorne’s second, has a strong sense of time and place, and characters who don't act like idiots at every conceivable opportunity, I'm stuck with trying to explain why you should read Angels at the Gate without repeating the word “terrific” too many times. I'll do my best to avoid such clichés as "page-turner" and "I couldn't put it down" (a phrase that always makes me imagine the book Krazy-Glued to the reader's hands).

Of course, I could put Thorne’s novel down, but I did so reluctantly. Here's why: It's Canaan, circa 1750 B.C.E. Our heroine is Adira, a cousin of Abram's (Abram was Abraham's original name before God changed it), who is disguised as a boy for a very good reason. Her mother died, and her father is a merchant who takes Adira with him on his caravan journeys.

Since a caravan is no place for a girl, Adira becomes Adir, and her father teaches her languages, negotiation, and how to get the best stock and best bargain. But Adira is nearing puberty, and soon it will be impossible for her to pass as a boy. Her time of freedom is drawing to a close.

The arrival of two strangers from the north is the catalyst for drastic change in Adira's life. The men are odd enough for people to wonder if they might be angels — while Adira is strongly attracted to one of the men. However, loss, adventure, and an arranged marriage to her cousin Lot all must be overcome if Adira is to find not only love, but a satisfying life.

Adira is a wonderful heroine and, for once, a strong-minded girl of the past doesn't sound as if she's been teleported in from the 21st century. She's intelligent, brave, determined, and witty. My favorite passage:

“I notice she [Sarai — Sarah's name before God changed it. Yes, really] never calls Ishmael by name, but always ‘you’ or ‘that boy.’  Father says her heart is broken because she has been barren. Her duty to the tribe is to produce heirs, and so she gave her handmaiden, Hagar, to lie with Abram, as is the custom in Babylonia. As soon as Ishmael was born, that elevated Hagar to the position of second wife. I do not understand why that infuriated Sarai since it was her idea in the first place.”

I admit, I laughed aloud at that.

Thorne warmly evokes the descriptions of her desert setting (making this an excellent book to read on a cold, snowy day). You savor the heat, smell the odors of the cities of the plain, and wrinkle your nose at the stink of bubbling pitch.

The action is convincing, the characters compelling, and the setting excellently depicted. Not only is the writing smooth, but Thorne cleverly twists the biblical story, adding realism without detracting from religion. She lets the reader decide whether God or nature is the ruling force in Canaan.

In fact, I liked Angels at the Gate so much that I ordered Thorne's first novel, Noah’s Wife, even before I finished the former. (In case you're wondering, Noah’s Wife is even more engaging than its successor. So go buy it. You won't be sorry.)

India Edghill's next book, Game of Queens: A Novel of Vashti and Esther, comes out in August 2015. She's also author of Delilah: A Novel of Samson & Delilah; Queenmaker: A Novel of King David’s Queen; and Wisdom’s Daughter: A Novel of Solomon & Sheba.