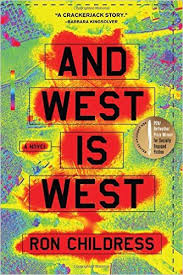 You stand in the aisle of the bookstore (or sit on the couch with your Kindle), and your finger rests on the title: And West is West by Ron Childress.

Hmm, you wonder. Do I want to take this on right now? Winner of the 2014 PEN/Bellwether Prize for Socially Engaged Fiction, a prize (you open the cover/click on the link) established and funded by Barbara Kingsolver in 2000 to “promote fiction that addresses issues of social justice and the impact of culture and politics on human relationships.”

I wasn’t really looking for something this serious, you think. I just want to relax and enjoy a story. Maybe I’ll put this on the “to read later” list…

Do yourself a favor, dear reader: pick this book up. This is no dry, hyper-intellectual treatise on the machinations of the military-industrial complex, nor a bitter diatribe against the evils of capitalism. With sharp writing and likeable characters, Ron Childress has woven a very human story out of the tangle of conflicts — military, political, financial — that bind us all together.

Jessica Aldridge is a promising Air Force drone pilot, flying surveillance missions in far corners of the world from an isolated bunker in Nevada. While watching a group of men in a desert outside Mogadishu, she spots a vehicle belonging to a high-level terrorist and receives the order to fire. She hesitates as his young wives and children exit the vehicle. She feels something is wrong; she cannot yet spot the actual target. Her supervisor repeats the order from Langley headquarters. She fires.

In New York, a young programmer’s fingers fly as he designs an algorithm for his bank, which profits from instantaneous trading on currency markets as they react to antiterrorist strikes such as Jessica’s. Ethan Winter is conflicted about his work, pushing past twinges of guilt to translate bombings and missile strikes into dollars on his company’s ledger sheet and his own bonus checks.

Meanwhile his girlfriend, Zoe, a recent college graduate launching her international affairs career, struggles to reconcile the gulf between the international-development world in Washington, DC, and the actual developing world.

Writing about the interlocking gears of war, profit, development and politics, Childress could have taken the predictable route and let the machine chug on, chewing up and spitting out doomed cogs, to make a statement of outrage. But that’s not what this book is about.

These characters have doubts and flaws and heart. They think about what they’re doing. At times they feel powerless, and at other times they take a stand. With clean, confident prose and deft touches of humor, Childress makes us care about these characters as humans, not just as foils against power.

When Jessica is discharged, we feel her sense of isolation and loss of identity as she wakes up to her new civilian life in a motel:

“Downstairs, the breakfast bar has opened. She eats reconstituted eggs, rubbery pancakes. A young boy with his parents stares at her through a skeleton mask. She stares back. Then she remembers it’s the thirty-first. Halloween. Since she is wearing fatigues maybe the boy thinks that she, too, is in costume. And she is, kind of; being in uniform makes her an impostor now. She’s not a protector anymore, a self-conception on which her self-esteem has depended. When she looks at the boy again his mother is lifting the mask to the top of his head so he can eat.”

We cringe for Zoe when one of her remote project managers demands payment outside of the program parameters, and we wonder with her whether the request is a ransom, a bribe or a hoax. Zoe also has to decide whether to risk the fallout if her organization were caught paying it: “Zoe nods. She is not afraid of losing her job for the cause. Although at this point she is vague on what, exactly, their cause is. Are they trying to help the women in the village? Or are they trying to make sure WIDO’s donors keep donating?”

There are few absolute villains in this book — even FBI agents and Army colonels are three-dimensional, with their own doubts and regrets. And it’s a page-turner, with a plot that keeps you asking, “What happens next?”

Another interesting feature is that the novel is written in present tense. In less expert hands the effect could have been gimmicky or exhausting, but with Childress’ skill, present tense lends the book a sense of freshness and immediacy. We walk through the desert with Jessica, discharged and adrift; we grit our teeth with Ethan, quashing doubts about our brilliant but cynical career. We burn our fingers on the levers of the machine alongside Zoe, trying to fight the good fight — as soon as we can figure out exactly which fight that is.

Tara Campbell is a Washington, DC-based writer of crossover sci-fi. With a BA in English and an MA in German language and literature, she has a demonstrated aversion to money and power. Her stories have appeared in publications such as Punchnel's, the WiFiles, Silverthought Online, Toasted Cake Podcast, Litro Magazine, Luna Station Quarterly, Up Do: Flash Fiction by Women Writers, T. Gene Davis's Speculative Blog, Master's Review, and Sci-Fi Romance Quarterly. Find her on Twitter at @TaraCampbellCom.