Can a bullied, reclusive girl find love in the arms of a ghost? 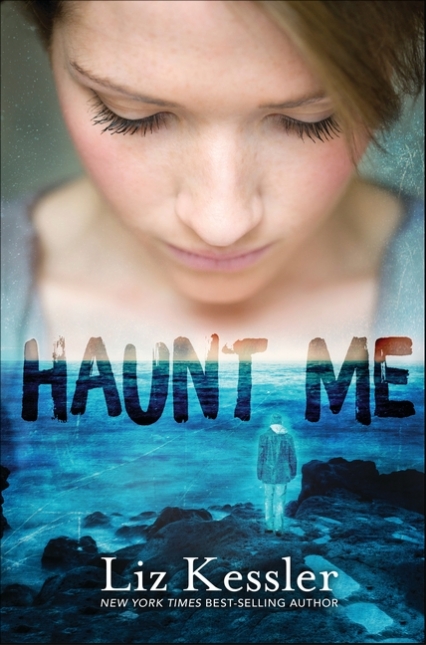 There’s an inherent hazard in writing young-adult fiction, and that hazard is not treading on well-trod pathways that have been explored before by better writers. The YA themes of loneliness, suicide, and bullying are universal, but the presentation is what separates a classic from a cliché.

Only time will tell whether Liz Kessler's Haunt Me is a classic, but it certainly isn’t a cliché.

At its core, Haunt Me is a love story, and that in itself can be problematic; the argument has been made that all teenage love stories are derived, on some level, from Romeo and Juliet. However, Kessler dispels such a lazy comparison in her opening pages by introducing Joe, who is unlike Romeo in that Joe is dead. (Yes, Romeo, too, is ultimately dead, but it takes a while.)

Joe is a ghost who has returned to the house and bedroom that were once his sanctuary. His life and family have moved out and moved on.

Kessler’s portrayal of Joe as a ghost is, well, haunting and effective in bringing the reader into the narrative. Being dead, as one might guess, isn’t easy, and this state of purgatory is perplexing to Joe as he tries to understand what and where he is in a world that’s reminiscent of his previous life but fuzzy around the edges.

“It’s as if…I don’t know how to describe it. It’s not a feeling I ever had when I was alive, so I don’t think alive people have words for it. The nearest I can get is to say it’s a bit like the doorway opens into a thick, cold black fog — but a fog that simultaneously scalds and freezes your skin if you make contact with it.”

Into Joe’s home moves Erin, a teenager with baggage of her own. She’s never had a friend or boyfriend, and her family had to pick up and move because the bullying at Erin’s old school had achieved a level that induced such frequent panic attacks that she was nicknamed “Bag Lady” for her need to breathe into a paper sack to avoid hyperventilating.

And then, as further evidence that teens are capable of all degrees of hateful wickedness, someone leaves a note for Erin suggesting that she put the bag to better use and end it all. Erin doesn’t employ a bag, but she does swallow a bottle of pills. That’s what prompts Mom and Dad to move across country to the coast in an effort to save their reclusive daughter.

Erin’s new school, unfortunately, is the same as the old and, to her eye, the same as every other high school in the world. She wants friends if for no other reason than to reward her parents’ love and fading hope that she can be “normal” (if such a thing is attainable for teenagers).

But despite Erin’s intentions, she finds herself repeating her old pattern of avoidance and hiding behind baggy clothes and long bangs. It’s only at home, in her new bedroom, that she feels a sense of calm. There is a presence, a lightness, in her room which, obviously, is Joe.

The “ghost in the bedroom” presents another potential minefield: visions of Patrick Swayze, Demi Moore, and a pottery wheel, although it dawns on me that most readers of Haunt Me are too young to remember the movie “Ghost.” But Kessler deftly weds the tales of Joe and Erin and, remarkably, makes their relationship plausible.

Since Erin is the only one who can see Joe, her competition for his attention is nil. She is falling in love with a ghost, and he is loving her back. Kessler has marched her story right up to the ocean’s edge, and the drama in Haunt Me lies in where she takes the narrative.

After all, loving a ghost confined to a bedroom may be ideal, but the potential for problems in such a relationship is huge. Kessler has set herself up deliciously for a climax ripe with possibilities.

Joe had a brother, Olly, who still goes to Erin’s school and has been carrying around the grief of his brother’s death for six months. Olly looks a lot like Joe and has the distinct advantage over his brother of being alive.

There’s also the problem of Joe not being able to spend time with Erin beyond the walls of her (his) bedroom. This upsets Joe during the hours Erin is away, and when he rages internally, the anger manifests itself in the physical world. Erin’s mother can only ignore the mysterious bumps and bangs for so long.

Kessler’s greatest feat in Haunt Me is making an improbable love story seem possible — right down to its conclusion in the harsh real world. A world that could use more love and, perhaps, more ghosts.

The Zero and the One: A Novel

A young man’s quiet life is upended when he meets a charismatic exchange student from America.