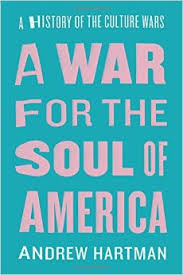 Since the 1960s, Andrew Hartman contends in A War for the Soul of America, there has been a dramatic and ongoing contest in America between cultural liberals, who advocate a multicultural society, and the spokesmen of conservatism, who seek to halt the liberalization of social mores and, indeed, turn back to a time (real or imagined) of greater order and hierarchy.

The unstable battleground of what he calls the culture wars has shifted time and again, jumping from one issue to the next, as an entrenched Right sought to hold back the forces of rapid change.

The specific issues he discusses, although far too numerous to list here, relate in general to the nature of the American family, various forms of sexual liberation, the rights of women and minorities, control of the schools, the role of religion in society, the interpretation of American history, and so forth. In sum, these concerns represent most of the contentious elements that define modern American society and culture.

Hartman manages to be exhaustive in his coverage, as well as interesting in describing the principal positions and leading characters of the struggle on both sides. For that, and simply to be reminded of the endless disputes, this makes a valuable source.

In the end, he concludes, the fight was more or less won by advocates of change as most Americans have come to accept the new, more fluid and liberal culture that the 1960s initiated.

Women’s rights have come to be accepted, although the equal pay has not been achieved. Gays have acquired a remarkably rapid recent, if fragile toleration. Racial integration is certainly widely accepted as an ideal, although it is not a reality. And the Constitution still bars attempts to impose some official version of Christianity in education and public life.

In general, American society today is more open, in almost every respect, than it was at the end of the 1950s, and the limitless possibilities of electronic communication suggest even more dramatic steps away from traditional social control.

Nevertheless, there are a number of questions that might be raised concerning his discussion. For example, is it appropriate, or even possible, one wonders, to present a dispassionate, even-handed, and sympathetic characterization of all sides in these disputes? Should a history simply record the various positions taken, or choose sides, as Hartman does, in presenting the arguments of the Right?

Given the stakes involved, this is not an easy question to answer. Moreover, by isolating the culture wars of the 1960s from similar sorts of struggles that have occurred in American history, Hartman may well be exaggerating the uniqueness of the contemporary era.

In the 19th and 20th centuries, there were critical moments of cultural struggle around religion, science, Prohibition, women’s rights, immigrants, and race that, if not exactly the same, suggest these struggles are more the norm than the exception.

It is also important to note that the 1960s did not happen without immediate precedent. During the 1940s and 1950s, there were internecine wars among intellectuals about mass culture and its supposed deleterious effects on society, as well as a movement on the Right to harness anti-communism as a weapon against liberalism.

While the author suggests that a majority of Americans have probably come to accept a more open and multicultural society, the culture wars are by no means terminated. The shift of one or two votes on the Supreme Court, for example, could usher in some very dark days for liberalism.

And a government that represents a minority opinion could, because of extreme gerrymandering and electoral corruption, modify, if not entirely reverse changes that are popularly supported. In other words, it might be better to describe the direction of American history as cyclical rather than always toward greater liberalism.

There is one further avenue for exploration in defining the nature of the culture wars, and that is the problem of explaining the social and economic forces that energize the disputants. What accounts for the extraordinary animus felt by rural and white working-class people for urban, educated liberals?

How has this come about, and what are the consequences? As Hartman himself acknowledges, in the end, cultural liberalism may have achieved a measure of success, and yet the nation has become dramatically more unequal in terms of income distribution and social mobility. Therein lays an even greater puzzle.

James Gilbert is Distinguished University Professor Emeritus at the University of Maryland and author of several books on 20th-century American culture.

The Ghost Ships of Archangel