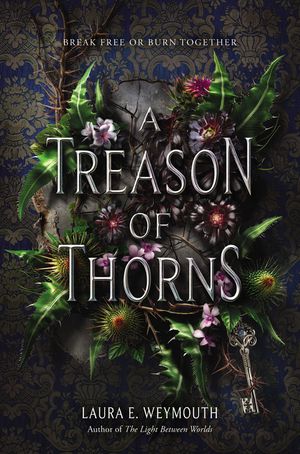 We sold our childhood home a few years back. When I close my eyes, I can map out that entire house — the downstairs rug that felt as vast as an ocean for my toy boats; the backyard spot where I consumed Harry Potter and the Half-Blood Prince in one sitting.

I’m privileged enough to have had a safe place to grow up, a comforting one filled with fond memories and its own sort of magic.

But that magic never tried to kill me.

Laura E. Weymouth’s A Treason of Thorns takes this idea and twists it into an unsettling tale that puts a new spin on the old saying, “Home is where the heart is.”

Before I get too ahead of myself, there’s a lot of background to chew on. Here’s the gist: a Caretaker must do anything for their House. Generations of Sterlings have served as Caretakers for Burleigh, one of England’s Great Houses. These landmarks have stood for centuries as sources of incredible power, maintaining the natural order and nourishing the land with their inherent magic.

If a House is well cared for, crops are plentiful, livestock is healthy, and everyone’s happy. And, as with most important resources, the royal and wealthy want control of them. They compel the Great Houses to serve England using a magical deed, and a Caretaker is appointed to oversee each manse.

Violet Sterling is eager to become Burleigh’s next Caretaker and dedicate her life to channeling its volatile magic, just as her father did. That is, until he was convicted of trying to release Burleigh of its bond — a treasonous act that lands him a death sentence, leaves Violet without a family, and robs Burleigh of its Caretaker. Of course, bad stuff follows.

Now Burleigh is dying, and the country is suffering. The king wants to burn Burleigh to the ground and let it be finished. So Violet must return home and try to save it. The weight of the house and the nation is on her shoulders as she navigates constant anxiety and self-doubt.

The real triumph of Weymouth’s story is that Violet is an engaging and well-realized character. She’s vulnerable and nervous, adamant to save Burleigh but able to admit when she needs someone to lean on. She draws strength from her relationship with Burleigh. She doesn’t have superpowers. Instead, she has empathy and regular old problem-solving skills. She tries to understand what Burleigh is thinking. (Yes, the house thinks and feels.)

Burleigh is a gothic mansion dialed up to 11, complete with unkempt hedges and ghosts around every crumbling corner. But Weymouth turns this setting into a living and (sort of) breathing entity. Burleigh speaks to Violet in the sudden growth of flowers through floorboards, the gentle brushing of vines, the creaking of wood, and the pricking of thorns. Storms split the sky when Burleigh’s angry, and the sun shines bright when it’s content. The ghosts wandering the halls are the house’s memories from days past.

These physical expressions are a neat way to layer Burleigh’s character without relying on dialogue. As Burleigh’s condition worsens and its frame begins to fall apart, its actions become more erratic.

But the ultimate story here belongs to Violet as she tries to understand who she is. Is she the daughter of a renowned father with unwelcome expectation heaped on her since birth, or a young woman fighting for agency in a world that sees her only as “the Sterling girl”? And can her love for her childhood home — this once-beautiful monument to happier times — be reconciled with the terrifying destruction it may unleash?

These questions complicate Violet and Burleigh, pushing them in interesting directions and allowing them to play off one another in memorable ways.

Joe Dell’Erba is a fan of all things fiction and a reviewer at the Independent. He’s looking for any excuse to read and write creatively every day. You can connect with him on Twitter at @jtdelle (where he promises to be more active…for real this time) or at jtdellerba@gmail.com. But reading this review is quite enough!