A Room Away From the Wolves

Inside a mysterious Manhattan boardinghouse, a flawed teen learns to embrace her truth. 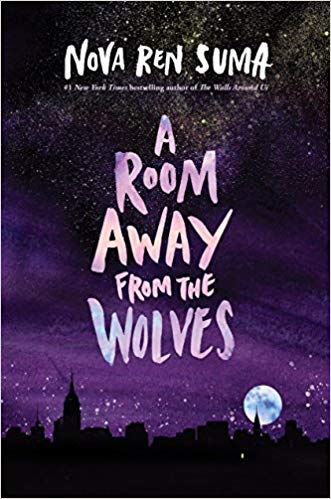 Sabina "Bina" Tremper is used to being known as a liar and a thief. The real surprise comes when Bina's mother, Dawn, sides with Bina's stepsisters and refuses to even consider that. this time, Bina might be telling the truth.

Hoping to defuse the situation, Dawn plans for Bina to temporarily move out. She hopes if Bina stays with her stepfather’s church friends, the girls will have time to reconcile.

But Bina has other plans. She instead decides to go to New York City.

New York City has always been a dream for Bina — a dream she used to share with her mother before Dawn abandoned it for safety and stability in the suburbs with Bina's churchgoing stepfather.

It feels a little like destiny when Bina calls Catherine House and finds out they have a room available right when she needs it. Catherine House is "a boardinghouse for young women, first opened in 1919 after a personal tragedy,” when an incident took Catherine de Barra’s life. The house was also the site of many of her mother's cherished stories from a summer spent in New York City before she returned to the abusive boyfriend she would marry soon after Bina was born.

Bina is certain that going to the city is the answer and her chance for a new start. "With an old suitcase and a fresh black eye," Bina follows in her mother's footsteps, hitchhiking to Manhattan and making her way to Catherine House at the intersection of Waverly Place and, yes, Waverly Place.

Inside the house, Bina is expected to follow rules that are “binary and boring and lifted from another time,” including a strict curfew and keeping the upper floors of the house as a “no-male zone at all times.”

The last of the rules is a vow asking boarders to promise they will not speak to “reporters, authors, historians, or anyone else, excluding female blood relations in the first and second degree (mothers and daughters, grandmothers and granddaughters) about the goings-on inside the house, nor the founder, though deceased, while in residence or afterward, effective up to 99 years.”

The stipulation doesn’t bother Bina. She’s more than willing to follow the rules and sign the vow, so long as it means she will finally have a room to call her own in the city.

The glamor and camaraderie from her mother's stories about Catherine House never materialize for Bina. The closest thing she has to a friend is Monet Mathis, her downstairs neighbor and, according to Bina, "the first person on this patch of crowded earth who knew who I was and not who I tried to be."

Monet could be Bina's greatest threat in the house, her closest friend, or maybe even something more. Unlike everyone else in her life, Bina is able to meet Monet as equals — liars and thieves and girls who are only able to take off their masks with each other.

Tangled up in her fascination with Monet and the girl's lavish lies about her past, Bina begins to suspect she's also unearthing secrets about the house — something to do with the summer her mother spent there all those years ago, a ring that should be lost but suddenly isn't, and a photograph of the house's founder, Catherine de Barra, that seems to move with a purpose Bina can't quite grasp.

A Room Away From the Wolves is an exploration of unfulfilled potential, female friendship, and second chances as much as it is an ode to New York City and all of the things that make it "sinister and strange and perfect."

Deliberate, tense plotting combined with an unreliable narrator and looping prose obscure as much as they reveal both about Bina and the boardinghouse. This novel is part mystery, part ghost story, and intensely focused on growing up and what that means for a girl who already has a reputation for all of the wrong reasons.

Readers familiar with Suma's earlier novel The Walls Around Us will recognize similar themes as Bina is forced to strip away her reputation and her bravado until she is left with only the truth about herself and her place in the house.

A Room Away From the Wolves is a timely book about a flawed girl who learns that she is allowed to be broken, so long as she can also keep trying and continue chasing that best version of herself.

The Search: A Novel