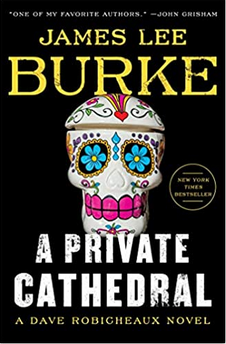 In his 23rd mystery featuring Louisiana lawman Dave Robicheaux, author James Lee Burke dispatches his hero, a compulsive do-gooder, on a swaggering quest to purge bayou country of two thoroughly nasty bad guys. Both are typical Robicheaux villains, each of them annoyingly privileged (from Dave’s point of view) and blithely violent toward ordinary folks.

But A Private Cathedral takes the Burke sensibility a step beyond. It’s a bizarre novel: a hyper-violent, phantasmagorical fever dream clothed in the livery of a whodunit. What’s more, it’s peppered with insistent nods to Homer and the 12th-century romance of Tristan and Iseult. And its crusading hero — in previous outings a champion of family values — twice plunges headlong into courtly-love-style triangles, warmed-over medieval tropes rejiggered for today’s readership.

Here’s the setup: Robicheaux and his perennial sidekick, private investigator Clete Purcel, are probing a rivalry between two criminal families. Robicheaux rightly suspects that the families have engineered a perverse détente — one echoing a centuries-old dynastic ploy: One boss has dispatched his teenage daughter to the bed of his rival paterfamilias.

Our hero and his hard-drinking pal incur the wrath of both clans with their persistence. The pair finds itself targeted by a demonic antagonist who appears to be a time-traveling wraith. This is not just chillingly unprecedented for them, but a significant deviation from the author’s customary plot construction. All Burke’s previous antagonists have been vicious villains indeed, but of the flesh-and-blood variety.

Some fans of the Robicheaux series may be discomfited by the 83-year-old Burke’s drift into horror-tinged speculative fiction. But even so, his skill at creating an authentic sense of place remains reassuringly intact:

“The sky was blue, a crusty sliver of moon still over the trees, the sugarcane bending in the fields. Down by the bayou was a cemetery with crypts that were green with lichen and scattered down the slope like huge decayed teeth.”

Another hallmark of the Burke canon recurs frequently, as well: a sudden-onset strain of extreme violence. Here’s sidekick Purcel in action in just two brutal Private Cathedral moments among many:

“Clete drove [Ray’s] head into the toilet bowl and slammed down the seat, then mounted it and began jumping up and down on it like a giant white ape, crushing Ray’s head into the shape of a football, blood stippling the bowl.”

“He grabbed Shondell by the neck and began beating his head on the chart table. The glass did not break, but Shondell’s head did. It broke the way a flowerpot full of dirt does, and then it came apart, a sanguine mist rising from Shondell’s hair.”

Robicheaux is wholly true to type in other ways, too. Beyond his Vietnam-engendered PTSD, he’s afflicted by a blustery sententiousness loosed quite unexpectedly from his mental treasury of 12-step, anti-addiction wisdom. Say what you want about Dave’s hair-trigger violence, or his late-emerging horndog urges, but this latter-day knight errant is a steadfast and persistent missionary for his higher power.

Still, it tends to get old, and in this book, for the first time in this reviewer’s experience with the series, it stands out as overkill. But if you stay around for the ending, it’s as slam-bang, heart-pounding, bloody, and incendiary as a Michael Bay flick. Dave and Clete save the day, of course, sending the wraith packing, at least for now, amid deaths and explosions galore.