How Not to Die Alone: A Novel 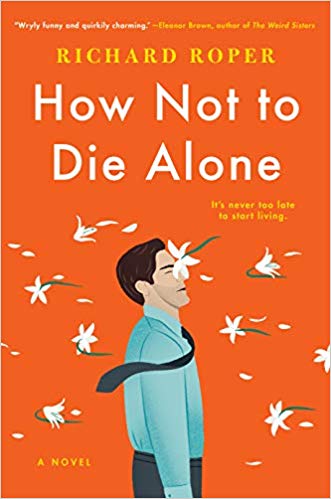 Andrew enlivens his mornings by parodying a cooking show. “So what I’ve done there is to combine the beans and the bread, and now I’ll just add a blob of ketchup (I use Captain Tomato but any brand is fine) to make it a tasty trio.”

At night, he lurks on a miniature-railroad-enthusiasts forum and listens to old vinyl records. During the day, when he’s not attending strangers’ funerals, he goes through dead people’s flats, looking for money and address books.

Andrew’s not a burglar. He works for the borough council and his job is to take care of the details for those poor sods (we’re in England) who die alone and lie unmissed, sometimes for months.

Any money he finds is used for a decent burial. The address books or scribbled numbers on the back of snapshots lead him to kin or friends to notify. Andrew empathizes with the dead and so goes beyond the job’s strict requirements by attending the funerals, often as the sole mourner.

Despite Andrew’s somewhat grim job, the novel teems with dark humor and amusing observations about life. An apartment is not merely tired but “absolutely knackered.” The point of the internet is to “mask inadequacies.” Upon finding a 20-pound note in her dressing gown, a woman “screamed so loud the dog farted.”

Andrew’s self-deprecating thoughts keep the world at a distance and underline his loneliness. Here’s what he thinks when he looks in the mirror:

“Maybe he should buy some cream or other to sort out those dark circles under his eyes. But then again, he did feel an odd sort of attachment to them, perhaps because they were the closest thing to a distinguishing feature he had…Part of him longed to have “a thing” — like those men who decide to compensate for being five foot five by spending hours in the gym, ending up incredibly muscly yet still having to walk a bit faster than their friends to keep up.”

What one person finds funny may bore or offend another, which explains the vast range of comic styles — from satire to slapstick to deadpan — author Richard Roper employs effectively throughout How Not to Die Alone. Except for an over-the-top first chapter that strains for laughs, the novel succeeds with an easy rhythm and sudden strokes of fun.

Counterbalancing that humor is Andrew’s kindness toward the dead. He attends memorials to “bear respectful witness to the poor soul departing on their final journey.” And his heart breaks when a deceased’s room is pristine. To him, that means “the moments immediately following their death were more of a pressing concern than whatever time they had left to live.”

Andrew, of course, has a secret. When he interviewed for his job, he felt pressured into bonhomie and invented a fancy house, complete with family — in reality, he lives alone in a tiny flat — and despite good intentions, he has never found a way to correct the lie.

Instead, he has created an entire spreadsheet describing his “wife” and “children,” their likes and dislikes. He’s now able, spur of the moment, to invent stories about Diane and the kids without a slip-up. But when his boss plans a team-building potluck, spouses required, things begin to unravel.

To complicate matters, a new hire, Peggy, arrives, and Andrew is assigned to train her. Surprisingly, she takes to the work despite having to wear a mask sprayed with aftershave to mitigate the stench of apartments where a body has long lain. Dealing with death encourages intimate talk, and Andrew begins to come to life.

Soon, the reader is rooting for him to make his way into a friendship, if not a deeper relationship, with Peggy. As he struggles to understand and confess his feelings, the plot swirls with a blackmailing brother-in-law, a quest for a next of kin who has a heartbreaking story, and a dinner party full of enough entrances and exits to be a French farce.

But, in the end, this is a story about mature adults with their own foibles and worldviews. No one falls into bed or gets punched. There are no car chases. Kindness, though, is everywhere.

It’s a book to take to bed, to relax with. After a well-earned twist, the novel’s end leans toward upbeat but without a fairytale solution. It’s simply a lovely tale of two people in the midst of change who are making the best of things.

Terri Lewis is a writer who lives in Palm Bay, FL, with her husband and two dogs: Pushkin, who thinks she’s a cat, and Tango, who belongs in the circus.