The Body Myth: A Novel 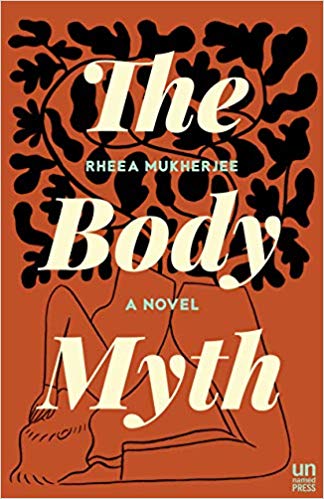 The first time Mira, the narrator of The Body Myth, sees Sara, the married woman she falls in love with, something strange happens. Mira is in a park — in the fictional Indian city of Suryam — hidden from view. She notices Sara, who strikes her as gorgeous.

As she watches, Sara fakes a seizure. Mira and Sara’s husband, Rahil, both run to help her. In the moments that follow, the three form a connection. And this is the seed from which a ménage à trois develops.

This is an intriguing beginning, but author Rheea Mukherjee struggles to strike the right note in the first crucial chapters.

Right after Sara’s seizure, the interaction between Mira, a widow, and Sara and Rahil seems to stretch credulity:

“Rahil reached toward me and dusted speckles of mud from my sneakers. I couldn’t remember the last time someone touched me with absentminded affection.”

And then Rahil untied and tied one of Mira’s laces. And this made Mira want to giggle. How many people, as adults, have experienced a friend, let alone a person they just met, untie and tie their laces uninvited? And how could this strike someone as amusing?

Of course, odd or shocking things happen in life and in novels, but in order for them to be believable in fiction, the author has to work her magic, mainly by providing context. Nowhere is this more apparent than in the description of how Mira reacted to seeing her husband’s dead body in a morgue:

“I pounded his chest, his fucking stupid bleeding-ass stomach that couldn’t seem to have gotten its act together in time. I smacked his face, I screeched, You fucking idiot, get up, why are you so fucking weak?”

This reaction may be dramatic, but it doesn’t come across as authentic.

Luckily for the reader, as the relationship between the three young individuals develops, the author hits her stride. Sara is the character the book revolves around, and she is mesmerizing. She keeps her home spic-and-span even though she is perpetually sick. She sways to Sufi music, which she is passionate about, and the mystery around her illness shifts and changes, becoming more and more gripping. She is highly intelligent yet completely non-intellectual.

Mira and Sara’s budding relationship is complex. On one hand, the two create small, comforting rituals, like drinking chamomile tea. On the other, Sara seems to haunt Mira in the way that entirely self-possessed yet distant people can. Mira desires Sara, but she is also suspicious of Sara’s motives.

Mira and Rahil’s story, in contrast, lacks depth. A few days after completing the novel, I can’t remember very much about him. We are told he is the most authentic man Mira has ever met and that he could turn an uncomfortable situation into something thrilling, but these seem like platitudes that don’t really shed light on his character.

Outside of this three-way relationship, Mira is a high-school teacher who thinks outside the box. She is obsessed with the French intellectual movement. She tells us she had almost committed suicide when her husband died, but “it was Camus, Sartre, Foucault, and de Beauvoir who led me back to life. These philosophers who embraced the absurd made my pain feel silly.”

Her passion seems to inspire some of her students. One student, however, gets carried away by Mira’s unconventional teaching, thereby creating an unexpectedly compelling subplot within this novel.

A motif running through the book — the fictional fruit Rasagura, which tasted like “a soaked berry, bursting with the tang of a lemon, with the texture of pudding and the sweetness of mango” — perplexed me. Why was there such a fantastical fruit in an otherwise realistic novel? What was I to make of it?

My ambivalence toward this fruit was a perfect reflection of how I felt about the novel. Its uneven quality and its riveting nature exist side by side. Ultimately, I couldn’t help but forgive the book its flaws, because, like the Rasagura, which I won’t forget in a hurry, the story managed to root itself in the corner of my mind.

The Blue between Sky and Water: A Novel

A deeply felt, occasionally foul-mouthed tale about a Palestinian family navigating the birth of Israel.