A Life Everlasting: The Extraordinary Story of One Boy’s Gift to Medical Science

This earnest narrative about a mother’s greatest loss blends memoir and investigative journalism. 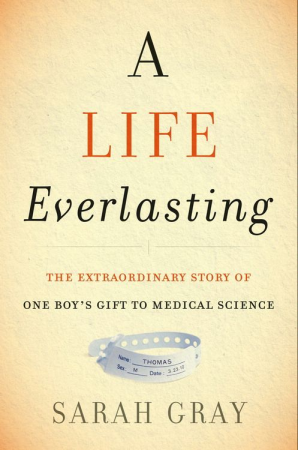 In A Life Everlasting, Sarah Gray relates the story of her search to find meaning in the ill-fated birth of her son Thomas. Diagnosed in utero with anencephaly (the near or total absence of a brain), Thomas isn’t expected to live beyond a few hours. And while Gray and her husband, Ross, consider termination, the danger to Thomas’ twin brother, Callum, who is healthy, steers the couple away from that path.

Yet the unsettling nature of a birth that will end in death lingers and leads Gray to seek solace in organ and tissue donor groups. “A terrible thing was about to happen,” the author writes, “but I was building meaning around it.” Though too small and young for standard organ donations, Thomas is eligible for tissue and cell donation for research. A decision made, the couple proceeds.

Thomas is born. Thomas dies. And while the reader is well-prepared for his death and, like the author, in full expectation of it, the moment is difficult but handled with finesse by the mom-turned-author.

“Thomas would stop breathing for a minute,” Gray writes, “and then take a giant breath in. He was barely moving.” When he dies, the couple pass his body around “so each of us could hold him one last time and say goodbye.”

Thomas’ death launches the author into the second movement of her memoir, where Gray’s work becomes a personal expository on organ donation. She relates her involvement with a donor self-help group, but unable to find proper closure, she follows Thomas to the myriad organizations where his donations have gone and reports on these experiences.

Here, A Life Everlasting differs from many books in this genre by drawing upon several narrative strategies and veering away from memoir as confessional storytelling. The work begins as a story of a mom’s loss but ends with its protagonist overtaken by the institutions, groups, and figures of donor-related research.

Gray begins with the organization that procured Thomas’ organs and tissue, WRTC (Washington Regional Transplant Community) in Washington, DC. She joins a counseling group, where she admits she is “looking for peace” but is unable to find it. A psychic who channels Thomas’ presence marks a turning point for the author where she feels “different” and decides “it was time to do something.”

Her start is contacting the Schepens Eye Research Institute, where Thomas’ eyes traveled. Gray recounts the institute’s history and mission “to find new ways to treat and cure eye disorders.” As with other facility visits, Gray includes science asides to bring lay readers up to speed. The reader learns about Dr. Zieske’s goal to transplant endothelial cells into eyes that lack a healthy number and is introduced to Dr. Kaslauskas, who seeks to understand the relationship between premature babies and blindness.

Gray next visits the anencephaly study lab at Duke University, where Thomas’ cord blood has impacted their research and where the author is able “to celebrate the work [she] had done to provide decent blood samples.”

She tours Cytonet, where his liver was received, and Old Dominion Eye Foundation, where his corneas were dispatched, and is in awe of the “immensely admirable” projects each runs. Much of this leads to the crux of Gray’s subtle argument regarding organ and tissue donation: that donors should have the option to be more informed.

“Why shouldn’t [the donors] ultimately know the impact of their donations?” she asks, adding that in her “dream world, there would be an established process for a donor’s family to be more informed.”

Her encounters and her present position as director of marketing and public affairs at the American Association of Tissue Banks is certainly a driving force in this thinking, but it does raise a valid point, one reinforced by the reader’s experience of her memoir.

Gray punctuates her narrative with other donor-related pieces. The reader meets the McGinleys and Conkels, who lose infants to fatal illnesses and, like Gray, find consolation in donation.

Perhaps Gray stretches her theme a bit too far when she includes pieces on patients whose relationship to organ donation is more tentative. There’s Sue Scott, who suffers from a rampant cancer, and Mara Cray, who was born with cystic fibrosis; both participate in drug trials, donating their selves and their illness to research in a move that prolongs their lives and returns a quality of life to their struggle. While Gray’s aim is clear in highlighting the possible outcomes of organ and tissue donation research, the book loses its tight focus within these sequences.

Part expository prose, part feature writing, part science report, and three parts memoir narrative, A Life Everlasting might not be for those more comfortable in memoir storytelling, but Gray brings the reader a topic that is engaging, compelling, and, forgive the pun, vital. Further, her conversational approach lightens what may have been in another’s hands a morbid work.

With A Life Everlasting, Gray has given her son a presence. Long after his retinas have been tested, his RNA replicated, his liver cells studied, Thomas will live on in her book — forever.

Shelby Smoak’s book Bleeder: A Memoir (Michigan State University Press) received praise from sources as diverse as the Minneapolis Star Tribune, Library Journal, and Glamour, and has won several awards, including an IPPY and IndieFab gold medal and an American Library Association selection as “Best of the Best” from university presses. His poetry, fiction, and nonfiction essays have appeared in journals and magazines such as Northern Virginia Review, Cities and Roads, and Coastal Plains Poetry. Awarded a Pen/American grant for writers living with HIV, Smoak holds a Ph.D. in Literature and an M.A. in English. He lives and writes in the Northern Virginia area.