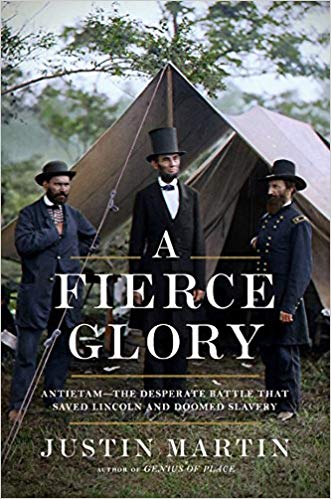 Justin Martin’s A Fierce Glory is the latest telling of the battle of Antietam, America’s bloodiest day. In a war that redefined carnage, Antietam stands out. The small town of Sharpsburg, Maryland, became the focal point for much larger events as the subtitle of the book, The Desperate Battle that Saved Lincoln and Doomed Slavery, rightfully contends.

The summer of 1862 witnessed a tumultuous series of events that threatened not only Abraham Lincoln’s presidency, but also the preservation of the United States as a nation. Battlefield defeats in the Virginia Peninsula and at Manassas Junction were quickly followed by Confederate invasions of Maryland, by Robert E. Lee’s Army of Northern Virginia, and of Kentucky, by Braxton Bragg’s Army of Tennessee.

The unpopularity of many of Lincoln’s policies, coupled with the series of battlefield setbacks, created a political as well as military crisis for the president. At stake were even larger issues, such as the freedom of some 4 million enslaved blacks, and the possibility of foreign intervention, which would assuredly result in a permanently divided Union.

Lincoln is a central figure in the narrative. Martin draws out the problems in the White House, the tragedy of the death of Lincoln’s son, and the drama that unfolds as he clashes on war policies with his army commander, George B. McClellan.

The challenges of civilian control of a military helmed by a recalcitrant general are well depicted. McClellan’s lack of communication with the commander-in-chief was nothing short of amazing in such a national emergency. Yet Lincoln withstood that storm as he simultaneously wrestled with emancipation of the slaves and a less-than-enthusiastic army, cabinet, and public.

Martin does a creditable job setting up the context of Antietam and analyzing its significance. He provides sufficient background of the military situation without getting lost in the details. Too often, battle narratives are presented in a vacuum, as if they are entities unto themselves. Such a presentation renders the supreme sacrifices made during war meaningless. It is only when one understands and appreciates the causes and consequences of a battle that the horrific costs can be tolerated.

Martin does not miss any key elements of the battle, nor does he neglect the larger social and political undertones. He also succeeds in telling a story rather than presenting a strictly military history, weaving in descriptions of Lincoln’s anxiety as he awaits news from the front.

Included in these close-ups are snippets of the medical innovations of the day, the contributions of Jonathan Letterman and Clara Barton, and the sensation created by battlefield photographs on the civilian population. The author also vividly describes the impact of the terrible battle on a small rural community. We see the totality of the nation’s immersion in the wartime experience.

Martin’s style is conversational but direct, with a heavy emphasis on the personalities and various regiments involved in the conflict. He explains some of the military terminology in simple language to the benefit of those not familiar with the subject matter, and he adroitly works individuals into the broader themes of his narrative.

The human drama of his subjects, their internal and interpersonal struggles, are presented along with the developments on the battlefield, at home, and in the White House. The result is a multi-faceted story that brings to bear a range of emotions surrounding the complicated events depicted.

The narrative is supported by three maps (one wishes for several more) and 16 pages of photographs. Regretfully, there are only a few of Alexander Gardner’s dramatic post-battle photos. The book is fully indexed, and end notes support the text.

There is nothing new here from the military side, and those looking only for that will be disappointed. This is anything but a detailed tactical analysis of the conflict. But anyone seeking a fresh telling of the human cost, anyone questing for larger meaning within this particularly bloody Civil War battle, will find A Fierce Glory to be a worthwhile read.

Robert I. Girardi earned his M.A. in public history from Loyola University of Chicago. He is a past president of the Civil War Round Table and sits on the board of directors of the Illinois State Historical Society. He is the author of 10 books and numerous essays about the Civil War.