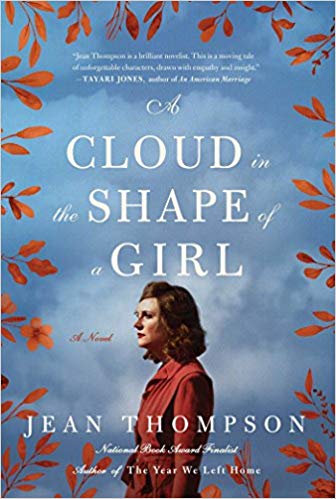 Jean Thompson’s new novel draws the reader in with character and plot — the lives of a young woman, her mother, and her grandmother unfolding in ordinary and not-so-ordinary messiness across decades. But what ultimately holds the reader enthralled is the chance to witness Thompson’s exceptional powers of observation when it comes to the smallest, most subtle reactions people have to each other and to the ebb and flow of life around them.

A Cloud in the Shape of a Girl opens with Evelyn, the family’s matriarch. She is in hospice care with her daughter, Laura, at her side. But the story soon shifts to Evelyn’s life as a younger woman, before her marriage. The secrets of that life will have profound effects for generations to come, and later, when the book turns to Laura’s story — marked by its own momentous secrets — and the story of Laura’s daughter, Grace, we see those toxic effects ripple through everyone’s lives.

The men in the novel, including Laura’s husband and son, are affected as deeply as anyone. The end result is much destruction and pain, although this dark, powerfully honest story also has an inner light that shines in glimpsed moments of courage. Women portrayed in this book are resilient, making the best of the lives they end up living. It is possible, even, to rebuild a shattered life and emerge from the shadows of secrets.

The story’s drama, sweeping across generations, is mesmerizing, but page by page is where Thompson truly showcases her great skill: her ability to capture the nuance of individual moments, thoughts, and reactions. No one writing today is better at this.

In many of these small moments, Thompson shows us how beholden families are to ingrained patterns of behavior and how these patterns govern their every interaction. She delivers this in dialogue that lies somewhere between swordplay and chess, rich in thrust-and-parry moves and chilly strategy.

When Laura suggests to her husband that they try a therapist, laying out her thoughtful reasons and ending with “People go to them all the time. They can help,” he responds, simply, sarcastically, “Help.”

Laura notes, “It was a trick he had, repeating something so that it turned into irony and was undercut.” He has shut her down, completely, with an attack delivered in a single word.

The ways people treat each other are instantly familiar once they are pointed out, all through this book. And many quiet, private moments also are recognizable; when Thompson turns her lens on these, it is utterly convincing and satisfying.

Grace goes through her closet, describing her mother’s mostly “sturdy and serviceable” wardrobe, but also noticing, “Her dress-up clothes on their hangers had a disappointed look; they had never lived up to their promise.” A complete assessment, somehow, of a mother by a daughter is captured in that comment.

There is something totally absorbing about watching this continuous unspooling of the characters’ observations. It feels not quite voyeuristic but sometimes comes close, these intimate thoughts on constant display. They can be weighty — “Death was impersonal. It pulled your loves and hates up by the roots. It rolled right over your likes and dislikes” — or as down to earth as Grace’s reflection that whenever she has said, “Life is strange” to people, “they agreed with her, though they had to be thinking about their own kinds of strangeness.” This observation, so simple and true, says much about the spaces between us.

A Cloud in the Shape of a Girl is about many things, including the limitations imposed by women’s roles and class roles. There is much examination, as well, of the realities of aging and the end of life, with writing that is stark, unsentimental, beautiful.

Grace thinks about her elderly grandmother: “It was as if the winds outside had blown her into tatters, like clothes left too long on a line. Her skin was crosshatched with wrinkles and her mouth was marked by deep hinges. Her hair was fine and white and disordered.”

There are deathbed scenes in the novel that are extraordinary in their precision, their honesty; in one, a dying woman is learning “to make laugh noises in her throat, not farther down. Too much laughing hurt. She sipped air as if it was water.”

This may seem like a book not for the faint of heart, but it is a rich experience that rewards the heart with every turn of the page. Thompson, a previous National Book Award finalist, is, as the expression goes, working at the height of her powers.

A Cloud in the Shape of a Girl begins with a death and ends with a life, exploring other lives and deaths in between. It is a story of women who marry for reasons that are not as simple as love. It is about mothers and daughters, about death and dying, but also about living. And what it says about living is the greatest gift Jean Thompson has given to this extraordinary novel.

Sally Shivnan is the author of the short-story collection Piranhas & Quicksand & Love. Her fiction and essays have appeared in the Georgia Review, Antioch Review, Glimmer Train, and other journals, and her travel writing has been featured in anthologies including Best American Travel Writing, as well as in the Washington Post, Miami Herald, Nature Conservancy Magazine, and many other publications. She teaches at University of Maryland Baltimore County (UMBC).

On Such a Full Sea: A Novel

A dystopian view of America 200 years down the road poses questions of what’s meant by freedom and security.