How three migrant women are cultivating a life in Jordan. 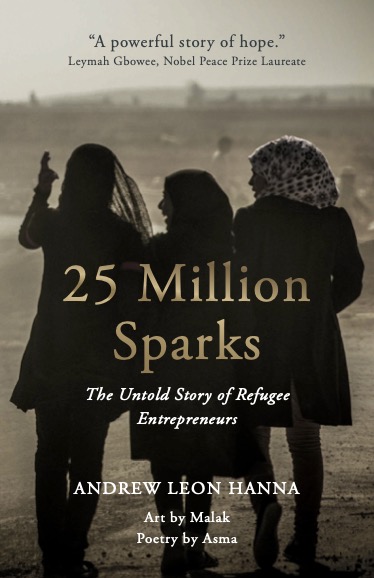 As a journalist freelancing for CNBC, I visited the Za’atari refugee camp in the north of Jordan in December 2015. Afterward, I was part of a conversation about the Syrian refugee situation with the founder of shipping company Aramex, Fadi Ghandour. He asked the other Jordanian leaders with us, “How you feel 10 years from now if Za’atari is one of Jordan’s largest cities?”

That future is almost upon us. About 77,200 people live in the camp today, which puts it into the top 15 largest of Jordan’s cities. Ghandour wasn’t a fortuneteller. He just knew the trend. In the second half of the 20th century, the world has seen a large and growing group of permanently displaced people — a whole nation-state of refugees. There are about 82 million around the world living in “camps” that can be as large as 200,000 people.

In 25 Million Sparks, Egyptian American attorney and author Andrew Leon Hanna captures a phenomenon that happens in almost all of the camps: Amid the noisome and sometimes terrible conditions, people begin to regrow their lives by starting tiny businesses.

He follows three women from Syria: Malak, an artist; Yasmina, a salon owner; and Asma, a teacher. 25 Million Sparks is a slim, sincere, and eye-opening book for readers who aren’t versed in the world’s refugee crisis. Unfortunately, it falls into the common trap of writing about courageous people in tragic situations: It turns the women into angels. While it makes for heartening reading, the reader suspects all the while that there’s a lot — too much — left unsaid about reality. Writes Hanna:

“The trio set about that mission to create a homeland. Malak, though she once dreaded the idea of living in a refugee camp, would begin seeing Za’atari as a blank canvas on which to paint her life. Yasmina would try to move past, at least for a time, the three decades of life she had built in Da’ara (Syria) and see Za’atari as her new community to serve. And Asma would strive to somehow transform the gravest of pains — the death of her child — into meaning and life for other children.”

The author details the dogged efforts of the three women to get real ventures off the ground, from the 2012 early days of Za’atari’s tents and bread lines to its condition today, a quasi-city of trailers on the border between Jordan and Syria, desperately poor but functional.

In Za’atari, all the needs of life remained, and there were business opportunities to fill them. People were marrying, so Yasmina, who’d owned a salon in Syria, sold her jewelry to buy two dresses for women to rent and began doing their hair and makeup. Malak, following a path artists everywhere know, studied medical analysis at a university and began spreading the love of art on a volunteer basis, gathering other budding artists around her. Asma, a mother of two who was pregnant with a third child she lost after the difficult trek from Syria, had wanted to be a teacher back home. In Za’atari, she opened what became essentially a branch office of an NGO called “I Love Reading.”

On a personal note, I visited Asma back in 2015, when she was first welcoming the children of Za’atari into her trailer to read to them. It was remarkable to learn from this book how much her program has grown — and that she has begun training other teachers in the camp.

“A far cry from its makeshift origins, Za’atari is in many ways like a city,” Hanna writes, noting how the refugees gave the main street the wry name Shams-Élysées. There are now more than 3,000 businesses in the camp generating $13 million a month in revenue, he reports.

The book contains a wealth of shocking statistics and clear-eyed perspective about the global refugee crisis. The Za’atari women’s stories are woven with those of other refugees. 25 Million Sparks details a phenomenon familiar to people from their own family stories: In many countries where they land, refugees are much more likely — perhaps twice as likely — than native-born residents to start a business. When refugees are free to move into the economies where they land, they often turn into a boon to their host countries, as Hanna details with examples from Utica, New York, and Port Adelaide, Australia.

“Camps, then, are being transformed by refugees into communities with market ecosystems and growing economies,” Hanna writes.

The book ends on a realistic note. Za’atari, which for all its market economy is still almost entirely supported by international aid, is not a place in which any of the women want to stay and rear their children. Asma has applied to emigrate to Canada. Yasmina and Malak long to return to Syria.

Jordan has opened the door to some Syrians with work permits. But this generation of refugees — like Palestinians or Armenians or countless others before them, and like millions of climate refugees to come in the next few decades — needs homes more than anything else in existing communities that welcome them. As Fadi Ghandour was saying back on that night in Amman, even the best camps cannot become cities — not within decades, anyway. In the meantime, millions are consigned to substandard living and stunted opportunities.

In a brief note at the end of 25 Million Sparks, Hanna calls for a systemic change in refugee resettlement. (The United States, for all its self-proclaiming as the land of opportunity, is one of the least-welcoming developed countries.)

Recognizing and celebrating refugees’ entrepreneurial energy is part of an effort to help the rest of us recognize that refugees often bring more than they take. Hanna does this admirably in 25 Million Sparks. It’s the same mission I was on back in 2015. But in simplifying and personalizing a complex topic in the interests of readability, he leaves out any real discussion of the causes of — or solutions to — the world’s refugee crisis. For that, we sorely need a more ambitious book.

Elizabeth MacBride is an independent journalist and co-author of The New Builders: Face to Face with the TRUE Future of Business.

Big Science: Ernest Lawrence and the Invention that Launched the Military-Industrial Complex

How a visionary scientist changed — for better or worse — the modern world.