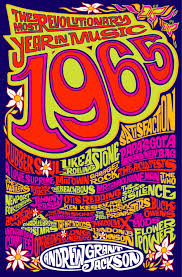 Popular forms of music live at the contested border between creativity and commerce, sometimes headed in one direction, sometimes the other. The year 1965 was a tumultuous one in which pop music marched in both directions at once.

In 1965: The Most Revolutionary Year in Music, Andrew Grant Jackson, author of previous books about John Lennon, Paul McCartney, George Harrison, and Ringo Starr and their post-Beatles musical careers, looks back a half-century at the times and tunes of the entire year.

Was it the “most revolutionary year in music” ever? This is hard to prove. But 1965 was the moment in which civil rights, Vietnam, and protests fused to form the “the Sixties.” Add in the demographics of baby boomers and more than a dollop of drugs, and you have it: the recipe for counterculture.

Jackson’s goal is to tell the intertwined story of music and social events. For example, songs calling for civil rights had already established a proud provenance. Peter, Paul and Mary’s “If I Had a Hammer” had been a hit in 1962, and Bob Dylan’s “Blowin’ in the Wind” was released in 1963.

But Jackson, looking more broadly, depicts 1965 as an important year for African-American musicians to add their commercial releases to the civil rights movement, including Sam Cooke’s “A Change is Gonna Come,” Nina Simone’s jazz cover of Billie Holiday’s “Strange Fruit,” and the Staples Singers’ retelling of the march from Selma to Montgomery in “The Freedom Highway.”

Artists challenged pre-existing views of what would be commercially successful. This is often understood as a fight between creativity — led by Dylan and the Beatles — and commerce, symbolized by the Brill Building, which housed songwriters such as Carole King.

These songwriters went to work every day to write for other performers. But this depiction is too simple. As Jackson points out, the key insight was that “accepted rules weren’t necessary; you could have complete artistic control and a Top 5 hit.”

That artistic control was blowing up standard industry ways of making music. For decades, singers sang and songwriters wrote. As Jackson explains, Dylan’s “anti-authority, increasingly surreal lyrics made the straightforward materials of the hit factory the Brill Building seem old-fashioned.”

Further, the Beatles’ chart-topping success had blazed a path for the most popular rock performers to do their own material — a competitive advantage that gave performers exclusive access to songs. This was a powerful tool in the hands of musicians with the ability to write songs, including Mick Jagger and Keith Richards.

The lines between genres were being blurred. Blues, country, folk, R&B, and Indian music were all being mixed together by performers who rebelled against expectations that they could be defined by a single style.

Apart even from Dylan, country musician Buck Owens was getting flack for covering Chuck Berry, and George Harrison unleashed the sitar on “Norwegian Wood.” As Brian Wilson of the Beach Boys explained, “We could go into new things — string quartets, auto harps, and instruments from another culture.”

Jackson discusses three monumental albums of 1965. Dylan had climbed to the peak of success as a folk singer and then bucked his audiences’ expectations, most notably by eliciting boos from the faithful when he went “electric.” His album Highway 61 Revisited breaks down the door with its opening track, “Like A Rolling Stone,” a six-minute raucous, edgy attack on a privileged woman who will soon discover how it feels “to be on your own, with no direction home, like a complete unknown, like a rolling stone.”

Dylan’s evolution was a challenge to the Beatles. Always competitive, they reinvented themselves in 1965’s Rubber Soul, 1966’s Revolver, and 1967’s Sgt. Pepper’s Lonely Hearts Club Band. If there was a single turning point, it arrived for this listener on Rubber Soul’s “In My Life.” Teen music is about the future. “In My Life” shows Lennon and McCartney mature enough to recall the pleasures of the past while embracing the prospects of the present.

As Dylan and the Beatles were evolving, jazz had come of age. By 1965, John Coltrane had played saxophone on classic jazz albums (including Miles Davis’ “Kind of Blue”); explored the use of musical modalities; studied the musical traditions of African, European, and Indian cultures; and beaten his drug addiction. Then he recorded “A Love Supreme,” his almost wordless meditation on the meaning of God. For this reviewer, it was a cosmic achievement — imagine Bach’s “Art of the Fugue” re-conceptualized as a jazz mantra.

Artistic growth was not the enemy of commerce for Dylan, the Beatles, or Coltrane. In fact, “Like A Rolling Stone” proved to be Dylan’s most popular single, Rubber Soul flew to number one, and Coltrane’s album was his best seller. But unlike “hustlers [who] found that the latest form of teenage rebellion meant money,” this was commerce understood to be “authentic,” not manufactured on a musical assembly line. This was commerce that expanded the boundaries of the music, which audiences embraced and bought.

Jackson’s recitation is more about events than evaluation. It’s a chronology likely to be of greatest interest to those of a certain age. For the young of 50 years ago, 1965 was a time when new experiences arrived like arrows of insight, decades before the accumulation of such experiences might form the armor of middle-aged resistance.

Jon Sallet is an amateur songwriter and musician who remembers 1965.