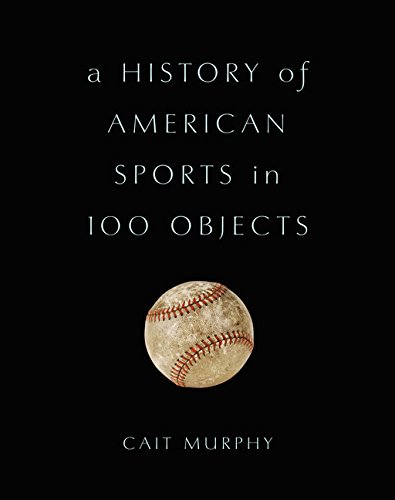 Maybe it was inevitable, once Neil MacGregor’s A History of the World in 100 Objects decorated coffee tables on both sides of the Atlantic. A cottage industry of copycat authors and publishers cropped up, using the same template to deliver clever — or not — takes on all manner of civilizations, great and small, and the larger-than life institutions and personalities who have inhabited them.

Now, in that six-year-old tradition, comes Cait Murphy’s A History of American Sports in 100 Objects.

MacGregor, director of the British Museum, employed objects from the museum’s massive collection to plumb 2 million years of human existence.

Murphy, previously the author of Crazy ’08: How a Cast of Cranks, Rogues, Boneheads and Magnets Created the Greatest Year in Baseball History, plunges into trickier waters: America’s games. There, any kind of list is guaranteed to spark the sort of argument Murphy anticipates — “How can I include Immaculata College and not Wilt Chamberlain?” — in the opening line of her introduction.

In only a few instances — the Zamboni, that tank-like machine that makes it possible to re-surface an ice rink in the few minutes between periods of a hockey game; the arthroscope, which allows surgeons to repair knees and elbows with minimal collateral damage, extending the careers of athletes who might otherwise be forever hobbled, like Mickey Mantle or the hockey great Bobby Orr; and the waffle iron used to create the shoe that sparked America’s running boom — does Murphy focus on an object for its own sake.

More often, the uniforms, balls, goal-post fragments, and tree splinters pictured here — alas, in pedestrian black-and-white snapshots, unlike the arresting, full-color glossy images in History of the World — are meant as a portal to broader tales of triumph, tragedy, or change.

Or, rather, a knothole view, because most of the stories are told in two- and three-page snippets.

So, here’s the bat Babe Ruth used to hit his “called shot” in the 1932 World Series. The visor Arnold Palmer tossed to celebrate his 1960 U.S. Open victory. Mike Eruzione’s hockey stick, used to score the winning goal against the Soviet juggernaut in the 1980 “Miracle on Ice.”

Here, too, are some nuggets you didn’t see coming: a lawn-bowling ball used by 17th-century Puritans of the Massachusetts Bay Colony; the collapsible six-iron astronaut Alan Shepard used to hit a golf ball on the moon. And who knew Abe Lincoln passed the time by playing handball in a Springfield, Illinois, alley while he awaited word on the outcome of the 1860 Republican Convention in Chicago?

Lincoln’s recreational activities aside, Murphy is not breaking a lot of new ground here. For the aficionado, A History of American Sports in 100 Objects is full of stuff we already knew: Tiger Woods was really, really good right up until he wasn’t. College football is big in Alabama. Lance Armstrong was a cheat, a liar, and capable of great cruelty toward those who dared puncture his carefully crafted — and ultimately false — image.

But while time and space restraints may have limited the opportunities for soaring prose, Murphy warms to the task when it comes to chronicling the struggles of women and African Americans in sports and in the larger society around them.

Among the best — and, not coincidentally, the longest — vignettes in A History of American Sports in 100 Objects is one devoted to debunking some of the myths surrounding Jesse Owens’ four-gold-medal performance in the 1936 Olympics in Nazi Germany, and another affirming Jackie Robinson’s place in baseball and American history.

Murphy quotes ex-Met Ed Charles who, with his boyhood friends, followed Robinson to the train station after watching him play an exhibition game in Florida. “When the train pulled out, we ran down the tracks, listening for the sounds as far as we could. And when we couldn’t hear it any longer, we stopped and put our ears to the track so we could feel the vibrations of that train carrying Jackie Robinson.”

The moving exception is the depiction of Detroit Tiger pitcher Armando Galarraga’s 2010 almost-perfect game, spoiled by a blown call by Jim Joyce, a 23-year veteran umpire, on what should have been the last out of the game. All that, of course, is redeemed by Joyce’s tears when he sees a post-game replay and realizes his mistake. “I feel like I took something away from the kid,” he says, “and I don’t know how to give it back.”

Then, when he manages to apologize in person — “I’m so sorry, Armando. I don’t know what else to say” — the much younger pitcher, who might’ve been excused for venting his disappointment or anger, offers the perfect response. “Nobody’s perfect.”

And you wonder why we love sports.

Mostly, A History of American Sports in 100 Objects is made to be enjoyed in bite-sized portions and not necessarily in chronological order. We get to stroll through Murphy’s collection the way we might’ve wandered the halls of the Smithsonian or the Museum of Natural History as children: first the giant whale, then the dinosaurs, before moving on to the more esoteric stuff.

In that same fashion, readers may find themselves circling back to objects that resonate; like Bobby Orr’s medieval-looking knee brace, symbolizing at once all that was — its owner’s on-ice elegance, and grace in the face of insult or injury — and what might’ve been.

Jay Price, an award-winning columnist at the Staten Island Advance and Sport magazine, is the author of Thanksgiving 1959: When One Corner of New York City Was Still Part of Small-Town America, and High School Football was the Last Thing Guys Did for Love. He coaches high school football in Manasquan, NJ.