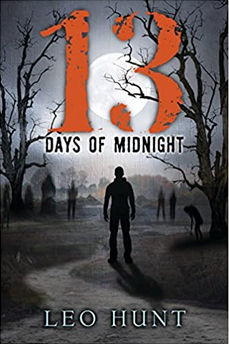 Sixteen-year-old Luke Manchett hasn’t seen or spoken to his father, the host of a famous paranormal TV show, in years. When his father abruptly dies, Luke goes to inquire about his inheritance, only to learn the truth about his dad.

It turns out Luke’s father left him with more than he bargained for. Not only was the show not faked — like he thought — but his father was a necromancer who could summon the dead at will.

Soon Luke inherits a Host, a group of eight powerful and restless spirits who catch on pretty quickly to the fact that Luke has no idea on how to handle them. All he has is a locked copy of The Book of Eight. But in order to figure out how to stop the Host before it’s too late, he needs to find a way to break the seal and unlock the book. The spirits are busy in the meantime possessing Luke’s mother and forcing him from his home.

Luke finds a friend in an unlikely source — school outcast Elza Moss, who has the ability to see ghosts. She reluctantly agrees to help him, but time is ticking fast. They only have 13 days to uncover the secrets of The Book of Eight and send the mutinous Host back to eternal rest before the spirits reach their full power.

This YA paranormal tale easily engages with its malicious spirits and mysterious, sealed book full of powerful secrets. But the book-within-this-book isn’t the only thing shrouded in secrecy: those around Luke, including his estranged father, are hiding their fair share of secrets as well.

What teen wouldn’t fantasize about the riches a famous dead relative might leave them? Only in this case, the inheritance isn’t exactly what the heir expected. Author Leo Hunt shows Luke struggling to make sense of this gift-cum-curse.

Elza evolves into a fascinating and enjoyable character as she uses her ability to help Luke figure out how to unlock The Book of Eight. At first, she comes across as unlikable and tough. However, her emo exterior cracks when she’s with Luke. Her vulnerabilities and desire to help make her a character readers will root for.

The storyline’s dark elements avoid going over the top. There are a few hints at sacrifice, but Hunt stays away from anything too gory. The horror element of the story is more psychological than graphic, which just adds to the intensity.

The novel’s only flaw is that the rush to the climax feels, well, rushed and, as a result, anticlimactic. I had hoped to see more between Elza and the confrontation with one of the Hosts. Instead, we are told what happened and the ending is wrapped up almost too quickly.

Still, the fast-paced action serves to keep the story moving, and the final reveal has some surprising twists that I didn’t see coming. This is an engaging paranormal story that will keep readers guessing until the end.

Kim Baccellia is a former bilingual teacher who now, if not homeschooling her son, is at a local Coffee Bean & Tea Leaf hard at work writing a YA novel. Kim loves reading, ice-tea lattes, yoga, writing, and traveling.