Violence, Apology, and the Politics of Art

We are all done waiting. 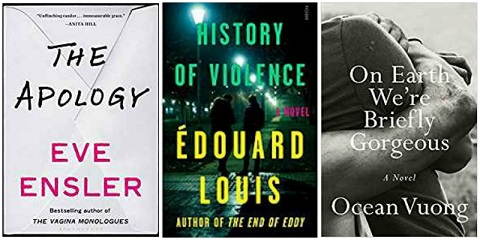 “I am done waiting.”

So begins Eve Ensler’s The Apology, a letter from the grave written in Ensler’s father’s voice 30 years after his death.

He violated her from the age of 5, going on to rape her and then beat her for years while demonizing her as a liar so that she was never fully trusted by her mother and family. Once Ensler was an adult, her father was mean and small, disinheriting her.

He never offered her an apology, so she decided to write one herself.

Ensler imagines her father’s perspective as best she can, enumerating the acts of violence in a harrowing read.

It is deeply affecting to hear the apology. Which of us has experienced a self-generated apology for abuse and violence, especially in the absence of a forcing to justice?

This is the nature of violation for most of us — we have to make sense of our senseless abuse and survive in spite of it. Ensler is a joyful figure. Author of the iconic “The Vagina Monologues,” she has spent her life as an activist and has said, “The only salvation is kindness.” (I saw the play with the magnificent Mahabanoo Kotwal in Mumbai in the early 2000s.)

A couple of days ago, my friend Anna Faber sent me an episode of “On Being,” where host Krista Tippett interviewed Richard Rohr, a Franciscan monk. Tippett spoke to Rohr about masculinity and spirituality: “Father hunger, it is driving so much in our culture,” Tippett says and calls it, “a chasm, a canyon” that you don’t outgrow; you are forever defined by these broken relationships across a life span.

For real change to occur, we have to go through a process of disorder, says Rohr:

“Picture three boxes, order, disorder, reorder…if you read the great myths of the world and the great religions, that is the normal path of transformation…There is no non-stop flight from order to reorder, you’ve got to go through the disorder. In this process, there is a necessary confrontation with the tragic, the absurd…disorder is part of the deal.”

Speaking is a political act. As reader and writer, we are discomfited, part voyeur present in the bedrooms where these acts unfold, part companion holding close a friend who has been through an intimate horror. Writing and reading become violent acts, shattering the status quo (the order), bringing what is private and hidden (disorder) into the open.

I think that is what Édouard Louis, the French writer, is trying to do when he says he must write about violence. In History of Violence, the narrator, Édouard, is raped on Christmas Eve. He tells his story mostly through the point of view of his sister Clara, who is telling her (perversely silent) husband what happened, paraphrasing and editorializing Édouard’s story while, in italics, Édouard returns the favor and tells the reader when “(She’s lying).”

Louis opens a creative door to the layers of speaking and listening, the first person, the second, the family, the stranger; who is voyeur, who is narrator, who is editor; how the small-town view contrasts with the Parisian view; the cops; and the kindness of Édouard’s dearest friends, who sit beside him as he falls asleep after the rape.

Reda is a beautiful stranger who pursues Édouard on the street, mesmerizing him in a split second. Reda is persistent, playful, tender, and passionate, and then he snaps, ready to massacre Édouard. Louis gives us one of the most realistic yet complex characters in fiction I’ve ever read, a mirror to Ensler’s father, a broken masculinity at its most devastating.

It is left to Édouard to try to explain why Reda did it, the victim filled again with empathy, his narrative furiously neurotic.

In 2018, Louis’ Who Killed My Father was published in English. The book is a tender, angry memoir on coming out, masculinity, class, and the failure of politicians to empathize with the tragedy of their rural constituents. He gave us a portrait of his own father, his back crushed in an industrial accident, an Everyman, juxtaposed against the Parisian elites who determine his fate and who urge men like Édouard’s father back into the workforce.

Louis’ 87-page manifesto on the place of his father and men like him in the world is a lamentation on class and the failure of imagination and humanity in our politics. The violence to Louis’ father comes partly from his status in French society, from poverty, from norms of masculinity that do not serve joy. In short images, he presents a man both reviled and beloved, whose son “loved you, but I felt a need to tell other people that I hated you. Why?”

"Is it normal to be ashamed of loving?"

Ensler’s father is not Louis’ father, but his corruption and ruin are a portrait of toxic masculinity.

“No. I was not insane. I was a privileged, forceful man. I lived above this world, above criticism, above reproach. I was programmed to control, to win at all costs. You were my child. You were my property.”

Reda, Édouard’s violator, appears to be a second-generation immigrant to France, a man victimized by the racism from which Louis tries to protect him.

Rape becomes a metaphor for all that is wrong, all that is broken. It is a symptom of deeper troubles. In that way, History of Violence reminds me of J.M. Coetzee’s Disgrace.

Where do we go from here, then?

Ensler’s dead father attempts to place himself in a metaphysical reckoning, as George Saunders’ ghosts do in Lincoln in the Bardo. This is challenging for any author to pull off, but I relate to why she may have done it.

I have often thought that when justice in this life is absent, will there not be a spiritual reckoning — a correcting of a world that is out of balance? There has to be justice somewhere in the universe, doesn’t there?

Ensler is seeking some sort of metaphysical closure, just like the ghosts in Lincoln’s Bardo are attempting to escape out of limbo to the other side. Each of us imagines in that unknown.

These books are opening spaces for the next level of discourse. Ensler appears to be asking us to think about the possibility of a conversation with our abusers, a conversation they will never initiate. She is reinforcing our roles as artists to initiate these conversations.

In On Earth We’re Briefly Gorgeous, Ocean Vuong’s exquisite autobiographical novel, love and violence are embedded in the same relationships between mother and son; between lovers; in the history of nations; in war; and, more specifically, in the history of Vietnam and America. And the destructiveness flaps inward and outward as we flail and then correct for beauty and acceptance.

Here, the child anoints the mother with a letter — Little Dog writes to his Ma, who never learned to read, the daughter of an unknown American soldier and Lan, a Vietnamese woman. Little Dog’s father is a hole, absent (Tippett’s “chasm, a canyon”).

The two important men in the narrator’s life are Paul and Trevor. Paul, a vet and one-time partner of Lan, is Little Dog’s grandfather and a good man. Trevor is an archetype of a different kind of Everyman, and the narrator’s beloved. I really don’t want to give too much away, as the reader does not know what is going to happen in Vuong’s book up front.

For me, these books are seeking to understand how violence is compensating for a deep sense of loss and powerlessness and how a correction can create a new order and regeneration.

Vuong and I were published around the same time in the Beloit Poetry Journal, and that is how I first came to know him through my friends Ann Arbor and John Rosenwald, who worked for Beloit. On Saturday, March 29, 2014, at the Split This Rock conference in Washington, DC, Ann, John, and I heard Vuong read “Telemachus” and knew something seismic was underfoot.

That moment was as significant as discovering Sylvia Plath. Organically emerging beside the #MeToo movement, Vuong carries the weight of a new world of literature that we are all influenced by. He draws on multiple traditions, simultaneously forged by myth and invention, his language and skill that of a genius fulfilling his intention.

I did not know the connection between Vuong and Louis when I began to read, but, in their acknowledgements, I noticed they are friends and champions of each other’s work. Louis and he are so young and yet powerful literary icons already, and rightfully so.

In a way, these writers are doing something transformative in their work. In Who Killed My Father, Louis is aware of this revolution he is seeking. Eve Ensler has always been an activist. Vuong speaks softly, and therein lies part of his power.

What will come next? Rohr speaks of this sort of deepening, that it is “bright sadness; a gravitas and a lightening, both.”

In Louis’ History of Violence, we find a quote that reflects this idea from Imre Kertesz’s Kaddish for an Unborn Child:

To come to grace, we need to find ways to talk about violence. This weight is huge, but by sharing it, perhaps we can help carry it as a society rather than be silent and carry it alone.

The male vulnerability these books bring forth and share with us is necessary to elicit in us a reaction that binds us together. Rohr calls it “grief work,” and says, “vulnerability is a scary thing for a man.”

Louis’ conversations with his father in Who Killed My Father strikes deep at the imagined conversation I have with my own father, who has never had a real conversation with me. Louis says:

“You’ve changed these past few years. You’ve become a different person. We’ve talked a lot…You used to say the problem with France was the foreigners and the homosexuals, and now you criticize French racism.”

It is at the heart of Vuong’s book, too: this re-imagining of what is possible when we tell our story. The love we have for our parents is reckless and, for Ensler, as for many, the conversation will never come. It can only be imagined.

We are attempting truth, we are attempting grace, a bright sadness, not a muteness. We are hoping to connect, to tell so we can change the order of violence, so that, in fact, we end the cycles of abuse. That is one of the reasons why I write.

There is a new order coming, one that does not normalize violence. “A normal violence” is what I call it because it is endemic and constant and in our veins and we have allowed it to become that. And now we want to transfuse ourselves with a new normal, remaking the world in the image of kindness.