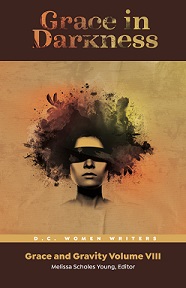 American University junior Tess Stewart leaned in as she asked her next question, “I consider some of your writing ‘art as advocacy.’ Do you?”

I smiled at the young woman sitting across from me in Davenport Coffee Shop. After writing for nearly 20 years, I was the interviewee for an author spotlight about my essay included in the Grace in Darkness anthology.

The question she asked stuck with me.

After focusing so extensively on my memoir manuscript over the past two years, I hadn’t considered my work the way Tess had for her creative-writing class.

Multiply this interview experience by 25 contributors and one begins to appreciate the literary conversations taking place behind the scenes of Grace in Darkness. The latest volume in the Grace & Gravity series, this edition marks several significant departures due to new editor Melissa Scholes Young.

For starters, Young’s first collection goes beyond short stories to include personal essays and flash fiction. More importantly, the series has become a joint venture between American University’s Department of Literature and Politics and Prose Bookstore.

An associate professor in the Writing Studies Program at AU, Young proposed a graduate-level Editing and Publishing course with the book launch as its final exam. Her students spent the spring 2018 semester reading DC-based literary journals, hosting their editors in class, and learning about editing through a hands-on approach. They also paired with local authors to write spotlights of each contributor.

During his tenure, the anthology grew into a bi-yearly series. Abundant Grace, the seventh and final volume under Peabody’s direction, came out in 2016 and included Young’s short story “Oxygen in Use.” When Peabody announced the edition would be his last, she eagerly offered to take over. When Peabody handed over the reins, he said, “It’s yours. Make it yours.”

Young didn’t hesitate with a title. She had previously hosted a reading/music series called “Art in Dark Times.” In the days after a contentious presidential election, amid countless marches in DC and the #MeToo movement, Grace in Darkness came into being. The philosophy remains the same: Promote Washington-area women writers. As Young has said many times, “The job of literature is to raise important questions and to begin conversations we need to have.”

Perhaps, as Tess Stewart suggested when interviewing me, art is advocacy.

[Editor's note: The current issue of Grace in Darkness can be purchased here.]

Warmer weather brings out Washington’s blossoms, and also its writers and readers. Mark your calendar for three literary festivals this season.