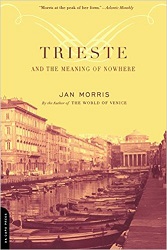 Trieste, an old port parked in a forgotten corner of Italy on the rim of the Adriatic Sea, is not on many tourist itineraries. It has none of the cathedrals or art that draw visitors to Florence or Rome and lacks the charm of a well-preserved medieval city like Venice or Dubrovnik. The main port of the Austro-Hungarian Empire during its 19th-century heyday, when that stretch of coast was ruled by Vienna, Trieste is nonetheless still redolent of the dual monarchy’s faded grandeur.

At least, I believe it is. I’ve never visited Trieste and it may be I never will. The good news is I don’t need to. I’m currently enjoying a leisurely stay there with Jan Morris, as literate a guide to any part of the world as you could hope for. She has visited Trieste often over the decades and knows all its secrets and charms; she is willing to share them with me over the course of just a few hours.

Morris, now 90, is a travel writer par excellence, having penned numerous works, mostly short, about places as diverse as Spain and Sydney. She said when it came out in 2001 that Trieste and the Meaning of Nowhere would be her last book, though she has since published a couple of memoirs. I’ve had it on my shelf for years and finally pulled it down one dreary rainy day to take a trip to the Mediterranean.

If one of the reasons you read is to go to faraway, exotic places without leaving the comfort of your armchair, travel writing could easily become your favorite genre. These are not guidebooks. Even if it might be useful to read them before visiting the place described, they would not work too well for that purpose. Rather, they are vivid, often lyrical descriptions that use every quality of language to make you see, feel, smell that place and inhale its history.

Travel writers not only go to places you never would or could. They see things there you would never see. And because at their best they are gifted writers, they leave you with a more lasting impression of that place than if you’d visited it yourself.

That’s because a lot of work goes into these journals, no matter how short they are in the end. Morris’s Trieste is only 203 pages, and Spain only 147 pages of text, but they condense massive amounts of history, architecture, and culture, and are chockfull of anecdotes of both contemporaries and historical figures. Morris, an early transgender luminary, came to prominence as a writer with the three-volume Pax Britannica, a comprehensive history of the British Empire appearing under her birth name, James Morris.

An intrepid journalist, Morris covered the conquest of Mount Everest by Edmund Hillary and Tenzing Norgay for the Times of London, and the Suez crisis for the Manchester Guardian before becoming a full-time writer. But her success as a travel writer owes more to her marvelous literary style, which so fully conveys her passion for the places she is describing.

Perhaps the only travel writer who can out-dazzle Morris is another intrepid Brit, Patrick Leigh Fermor, whose A Time of Gifts, a 1977 account of his journey on foot from London to the Danube on his way to Constantinople in the 1930s, is a classic of the genre.

Fermor’s powers of observation and description raise travel writing to a true art form. He is credited with influencing a generation of travel writers. One of those was Bruce Chatwin, whose In Patagonia is another classic. Chatwin, before his premature death at age 48 as an early victim of AIDS, also wrote novels, as well as The Songlines, a mix of fiction and travel writing.

Other notable travel writers include the American Paul Theroux, who became famous for his 1975 book, The Great Railway Bazaar, and went on to write both fiction and nonfiction, including the novel The Mosquito Coast and the travel book Dark Star Safari.

William Least Heat-Moon, or William Trogdon, is a “topographical” travel writer, best known for his 1982 book Blue Highways about his odyssey along 13,000 miles of rural backroads. Subsequent works included Prairy-Erth, a deep dive into the history and geography of Chase County in the Flint Hills of Kansas, and River-Horse, a coast-to-coast riverboat journey.

There are many other travel writers — Bill Bryson, Pico Iyer, Colin Thubron, William Dalrymple, Jonathan Raban, to name a few — justly celebrated for their wit, their learning, and most of all for the quality of their writing. Sharing someone else’s travel experience can be as tedious as watching a slideshow. Or, as in the hands of these talented writers, it can be a memorable literary experience.

The Lives of Leaders

Presidential biographies can tell us a lot about our nation.