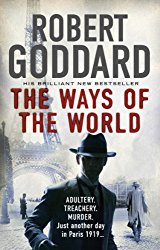 Robert Goddard’s latest book won’t be getting any book-club buzz or come out in a reader’s guide edition with questions and answers for group discussion.

The British novelist is an old-fashioned writer for old-fashioned readers, and his plot-driven thrillers can probably be classified as whatever is the opposite of chick lit (that is, for readers like me, men of a certain age, and others who often prefer just a good adventure yarn).

To the extent his books get any notice at all in the august New York Times Book Review, it is generally among those short reviews of crime fiction, where critics have settled on “romantic thriller” to describe Goddard’s novels. Marilyn Stasio, for instance, in a short 2006 review of Borrowed Time, spoke of his “achingly romantic fictions — a male narrator awakened to life by an encounter with an unattainable woman.”

Although that is changing, Goddard is, in fact, little known to American readers, even though many of his 26 novels made the bestseller lists in Britain. The author, now 61, published his first novel, Past Caring, in 1986. His most recent, The Ends of the Earth, the third volume in a trilogy, appeared in Britain last year and is coming out in the U.S. next spring.

I discovered Goddard when I picked up his fourth novel, Into the Blue, in a used-book store. What appealed to me was its setting in contemporary Greece, though that marked a departure at that the time for the author, who had written mostly historical novels.

His protagonist, expatriate Brit Harry Barnett, described in the book flap as “a middle-aged failure leading a shabby existence,” eventually does find his way back to the more familiar Goddard terrain of provincial England as he tries to unravel the mystery of a young woman tourist who disappears in Greece.

Since then, Goddard has been something of a literary comfort food for me. He writes in a vigorous Anglo-Saxon-tinged language that is far from pedestrian though not quite “literary.” Above all, he excels at old-fashioned storytelling, propelling the reader through plots that are much more intricate than you realize at the time.

Writers like David Mitchell may dazzle with their language and inventiveness in books like Cloud Atlas and The Bone Clocks. Umberto Eco may artfully build layers of meaning into The Name of the Rose or Foucault’s Pendulum. Jess Walter may mesmerize you with his wit in Citizen Vince or Beautiful Ruins.

But these writers demand a level of engagement from the reader that you’re not always up to. Sometimes you just want to kick back and relax with a good read. And that’s where Goddard comes in.

The author followed up the first Harry Barnett book with two sequels, Out of the Sun and Never Go Back, and the latest trilogy features the adventures of a World War I flying ace, James “Max” Maxted, in the period following the war. But most of Goddard’s novels are standalones with diverse protagonists that keep him from falling into the formulaic trap that bedevils American thriller writers like Daniel Silva or Vince Flynn. And, unlike many of the cardboard figures of typical thrillers, Goddard’s characters invariably betray an ambivalence that gives them depth.

Goddard’s debut novel, Past Caring, starts with the visit of a young British history graduate to Madeira, but also leads back to England, and, via a long memoir that is a story within a story, back in history to the early 20th century. His second, In Pale Battalions, starts with a soldier returning to England in 1916 after the Battle of the Somme to find himself immersed in a multigenerational mystery.

Other novels also weave old family secrets and latter-day skullduggery across generations. This is what drives the new Maxted trilogy — The Ways of the World, The Corners of the Globe, and the forthcoming The Ends of the Earth. Secrets lodged in a Cornwall manor house and a succession of family betrayals propelled my most recent Goddard read, Days Without Number, to its dramatic conclusion in Venice.

The titles are often too abstract, if generally apt, to recall. Likewise, the plots themselves, like intricate gossamer, often dissolve quickly in your memory. But then, you don’t remember every delicious dish of mac ’n cheese or plate of fried chicken, either, but they always make you feel better.

“We Are All Ukrainians”

History has many lessons for Russia and the world.