The Fault in Their Stars

The positives — and perils — of book-ranking systems 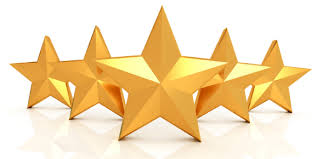 I write thrillers and mysteries published as e-books on Amazon. And readers, a surprising number of whom aren’t relatives, friends, or people who owe me money, subsequently post reviews. The reviews range from one to five stars. In order of “star-iness,” the ranking are:

(By the way, I didn’t make this up. I copied the list straight from the Amazon page!)

I’ve had five stars from people in other countries whom I don’t know. Assuming they weren’t written by someone occupying a padded cell in, say, the London Institute for the Criminally Insane, I cherish those reviews.

Four stars, from an author’s perspective, are often more valuable, since they indicate the reader not only liked the book, but probably put a lot of thought into the review.

(One reviewer said he wished Amazon allowed half stars, because the book deserved more than four but not quite five; I’m not sure I read my own books with that level of interest.)

At the bottom of the pile are the one- and two-star reviews. I am happy to report that I have rarely been skewered by such mean-spirited and uninformed comments by people who really should be in the London Institute for the Criminally Insane.

Only kidding. Some folks just don’t like my kind of writing. Or maybe I owe them money. Truth is, getting a bad review is not all bad, since it provides a much-needed reality check for authors, such as moi, who think they are bloomin’ geniuses.

Most of us are just regular people who forget to take out the garbage and regularly miss golf putts the length of a paramecium. Such reviews also serve to convince potential readers that my books are being critiqued by total strangers, and not people I am holding at gunpoint. Nothing validates good reviews more than the occasional scurvy one.

Then there are the three-star reviews. They are often weird. There is no other word for some of them. I’ve had a three-star that was so complimentary, I had to check to make sure I didn’t write it myself. And I’ve had a three-star so scathing I could imagine the reader hurling his Kindle across the room in disgust. Yet it got three stars, which, according to ranking system above, means that he thought it was “okay.”

But some three-star reviews are also very valuable, since readers often identify what they liked or disliked (plot, characters, length, typos, etc.). I’m not a writer who wants to cater to every taste, but I’d be dumber than a sponge to ignore constructive criticism.

I once received one three-star review that really rocked me. Here it is, verbatim: “I sort of liked it but it was not up to the standards of the Spenser series. I may be spoiled by Parker.”

I revere Robert B. Parker, who re-invented the private-eye novel with his Spenser series. In more than 30 books, Parker set the bar to a level I probably will never reach. But that doesn’t mean I won’t stop trying. Indeed, I periodically re-read ALL the Spenser novels for a literary transfusion of sorts. And I read just about everything Parker said about writing.

Asked once why he thought his books were so popular, Parker argued that people probably just liked the way they sounded (or, in effect, read). His dialogue and descriptions, he indicated, kept his fans involved. They enjoyed being in the world of Spenser, Hawk, Susan, Quirk, Belson, Vinnie Morris, and all the other colorful and familiar characters, good and evil.

I think Parker was being self-deprecating. Many of his Spensers also had terrific plots and surprises, which kept readers coming back for more. But I took to heart his belief that all characters (both heroes and villains) must be interesting, and not cardboard stereotypes.

And I take to heart that three-star review suggesting — demanding — that I up my game.

Self-published authors deserve it, too