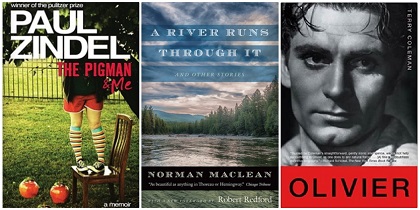 When last we spoke, I recommended books to read for those who might be stuck at home during the pandemic. Since very little has changed, I’m going to recommend some more, once again plumbing my bookcase, which is full of books I read years ago and now, occasionally, re-read.

Local libraries are reopening — or delivering — and, of course, there are other ways to get older tomes via the internet: Amazon, Barnes & Noble, Bookshop, etc. I can’t swear that I haven’t mentioned these books in previous columns, so, if I have, shoot me an email. It would be nice to have some new correspondence. Give me something to do other than staring at my bookcase.

The Best of Robicheaux (The Author’s Choice) by James Lee Burke. Now, I don’t know if the great Burke actually chose In the Electric Mist with Confederate Dead, Cadillac Jukebox, or Sunset Limited as his “best” Dave Robicheaux books. His publisher probably just put the anthology together. (Personally, I like Burke’s Heaven’s Prisoners.) But these three are great thrillers and a terrific introduction to the reformed-alcoholic Louisiana detective. Burke is an atmospheric writer, so be prepared to get a hankering for Cajun food.

The Pigman & Me by Paul Zindel. A crazy title for a small and hilarious book by the author better known for his Pulitzer Prize-winning The Effect of Gamma Rays on Man-in-the-Moon Marigolds. Heck, that’s a crazy title, too! Anyway, The Pigman & Me is allegedly a true story about Zindel’s life on Staten Island, New York City’s “forgotten borough.” It details Zindel’s formative years. Having spent my own formative (or deformative) years on Staten Island, I can attest that Zindel’s interaction with, among hundreds of other oddities, the apple tree, the water-headed baby, Cemetery Hill, and Nonno Frankie Vivona (the Pigman) are probably not exaggerated. In fact, let’s do away with “allegedly.”

A River Runs Through It and Other Stories by Norman Maclean. Most people remember the great Brad Pitt movie made from this book. “I am haunted by waters,” Maclean writes at the end of the title piece, which contains his recollections of life with his father and brother as they fished the Big Blackfoot River in the Rockies. You will be haunted by this book, which is more about life than fishing. Maclean published River in his 70s (giving us all hope). One of his earlier works, Young Men and Fire, about Montana’s Man Gulch forest fire of 1949, has resonance to this day, as we are all sadly aware.

Get Shorty by Elmore Leonard. I have a sneaking suspicion that I’ve mentioned this great comedic thriller before, but it, and I, bear repeating. The plot is pure genius. A Miami loan shark named Chili Palmer finds himself embroiled in Hollywood intrigue — and is right at home! John Travolta — aided by a terrific cast that included Renee Russo, Gene Hackman, and Danny DeVito — played Chili perfectly in the film of the same name. It’s one of those movies that, if you come across it while channel surfing, you ignore the grease fire in the kitchen to watch. The novel is just as addictive.

Seabiscuit by Laura Hillenbrand. At one time, horseracing was one of America’s premier sporting events. And this true tale of an undersized, non-thoroughbred-looking Thoroughbred who captured the imagination of a Depression-ravaged America belongs in every reader’s winner’s circle. Hillenbrand is now probably better known for Unbroken, the true story of a man who survived Japanese torture during WWII. But Seabiscuit, which is as much about the people and an era as it is about the horse, is justifiably a classic.

Olivier by Terry Coleman. The definitive biography of the greatest actor, stage or screen, of the 20th century. Who doesn’t remember his performance as the sadistic Nazi dentist in “Marathon Man” (“Is it safe?”), drilling Dustin Hoffman’s teeth without Novocain? But my first memory of Sir Laurence is his mesmerizing portrayal of the tortured Heathcliff in “Wuthering Heights.” There is not one movie with Olivier in it that is not special. In this biography, Coleman brilliantly defines a man who somehow weathered an affair (and marriage) to the great but depressive Vivien Leigh, debt, many serious illnesses, and, of all things, crushing stage fright!

Lawrence De Maria has written more than 20 thrillers and mysteries available in print or digitally on Amazon or at www.lawrencedemaria.com. His latest, DANCEFIRE, is about a serial killer protected by his wealth and political influence. It is fiction, he thinks.