The Famous Book She Never Wrote

The story of Simone Weil’s Gravity and Grace. 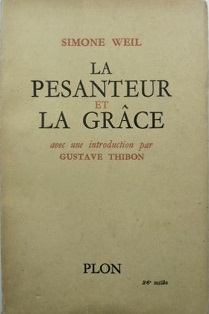 “She was the patron saint of all outsiders.”

Simone Weil (1909-1943): the name has drawn worldwide attention. Her words and works prompt everything from reverence to reflection to refutation. The voluminous writings of this controversial French philosopher, nonconformist teacher, activist, factory and farm worker, onetime pacifist, Resistance writer, and existentialist mystic continue to draw immense notice 77 years after her death.

Even the renown of her genius brother, André Weil (one of the most famous mathematicians of the last century), could not eclipse her posthumous prominence. Some 20 of her works exist in English translation alone, with yet more in her French opus and in countless translations. Scores of biographies about her and commentaries on her thought are available in English, Italian, German, Spanish, French, and Chinese, among other languages.

Gravity and Grace is one of her most-read works. First published in France in 1947, La Pésanteur et la grâce was received as a manifesto of faith for those searching for God’s presence in the black holes of an indifferent universe.

Despite the claim on the book’s cover and title page, it is not a book that Weil wrote. True, its words were hers. But the conception, selection, organization, and rearrangement of those words into 39 compressed chapters with aphorism-like appeal were not her work product.

Rather, they were titled and patched together by Gustave Thibon (1903-2001). Excerpting and arranging fragments from the 11 notebooks she entrusted to him in 1942, Thibon staged Weil’s thoughts for all to behold.

It was quite a feat, this stitching together of words into groupings by her Catholic friend, a winegrower and self-educated philosopher. But having done so, the work was presented as a book by Weil. In a 1991 postscript to Gravity and Grace, Thibon described his role as simply “presenting Simone Weil’s first book to the public.”

The Weil-Thibon relationship and its after-her-death consequences make for strange stories. Simone was an intellectual of Jewish lineage born in Paris who read and translated ancient Greek and also taught herself Sanskrit. She was a socialist radical repulsed, as she judged it, by the Church’s history of cultural and spiritual oppression. She also had a striking aversion to the violence supposedly inspired by Jehovah in the Jewish Bible.

Gustave, by contrast, was a gentleman of the wine country; he was a doctrinaire Catholic convert and supporter of the antisemitic Vichy Regime. While they were an unbelievably peculiar pair, there was a genuine bond of respect between the two. Likewise, they found common ground when it came to certain tenets of faith, yet even on that score, there were uninhibited quarrels.

Not long before Simone and her secular Jewish parents fled France for Morocco on the steamship Maréchal-Lyautey, Weil entrusted her penned notebooks to Thibon. Before then, she had worked eight-hour days in Thibon’s vineyards in the Ardèche region, this to internalize the plight of grape pickers.

In turning over her notebooks, Weil was rather prophetic about the fate of her words: “So they now belong to you. I hope after having been transmuted within you they will one day come out in one of your books.”

Later, she explained: “I should be very happy for them to find a lodging beneath your pen, whilst changing their form so as to reflect your likeness” (italics added). In a real sense, then, Gravity and Grace was actually that: one of Thibon’s books, a Weil work either cast in his likeness or one presented in ways he felt faithful to her thought, albeit as he framed it.

There was, however, a fly in the agreed-upon ointment: “If you hear nothing of me for three or four years,” she added, “you can consider you have complete ownership of them.” Simone died in late August of the following year in a sanatorium in Ashford, England; she was 34. The coroner ruled her death the result of cardiac failure from self-starvation and tuberculosis (though there are other accounts).

Given her unexpected passing, ownership of the notebooks may well have vested with her parents, since the condition of use or publication could not be satisfied. Nonetheless, and apparently without the family’s permission, Thibon went to Plon, a then-conservative house, to publish his collection of Weil’s words.

Starting in 1949, Albert Camus had many of her other words and works (especially her political essays and a report that came to be known as The Need for Roots) published in his Espoir series by Gallimard, a more liberal house. Thus, her posthumous fate moved on two tracks at the outset, one largely spiritual, the other largely political, though strands of each could be found in the other.

“Truth is shaped by the way in which it is presented.”

Gravity and Grace, “by Simone Weil,” came out with an “introduction by Gustave Thibon,” wherein he explained how the notebooks came to him. (Who, if anyone, received any advance or royalties is unknown.) Thibon’s selection and packaging took complex ideas, like “decreation,” and attempted to explain them by stringing together disconnected passages from the notebooks. The assumption might have been that, when stacked together, such lines would render their meaning apparent.

Thibon’s topical pigeonholing was sometimes a grab-bag of marginally related (if that) ideas. Take the chapter, as translated, that he titled “Social Harmony,” a strange title since the word “harmony” nowhere else appeared in that chapter. Weil’s word was “equilibrium,” as in symmetry or balance. Instead of focusing on “social harmony,” her concern was with “social order,” which is “nothing but an equilibrium of forces.”

What terms did appear, in often disjointed ways in that chapter of Gravity and Grace, were floating lines about “legitimacy,” “atheistic materialism,” “sociology,” “revolution,” the “value of history,” and the role of “Christ” in such disparate matters. In other words, Thibon’s chapter lacked equilibrium.

The countless entries Weil made in her notebooks, at different times and in different contexts, were written mainly as dialectical exercises — unfinished ideas she hoped to probe further, both philosophically and spiritually. Her intention was not to write books; her attention was not on publishing books. Rather, she used her notebooks as a way of doing philosophy, akin to a form of prayer as she understood it.

“Weil’s independence of mind and resistance to ideological conformity are central to her philosophy.”

Owing in part to Thibon’s handiwork, Weil first came to be seen in many quarters as a Catholic thinker, though he had help from others, such as her friend Father J.M. Perrin. (In 1952, the two published a book on her titled Simone Weil as We Knew Her.)

Admittedly, in his introduction to Gravity and Grace, Thibon conceded that Weil’s philosophy, “though…within the orbit of the great Christian truths, contains nothing specifically Catholic, and she never accepted the universal authority of the Church.” Likewise, he acknowledged that Weil had “a deep veneration for the great Hindu and Taoistic writings, for Homer, the Greek tragedies, and above all for Plato.”

Such acknowledgements notwithstanding, the influence of Thibon’s packaging was captivating; practically speaking, its subtext felt quite Catholic. As J.P. Little has all too diplomatically observed: “Given [Thibon’s] deep Catholic faith, it was perhaps inevitable that Gravity and Grace suggested a less complex relationship with Catholicism than was actually the case.”

A different casting of her words might have presented her central ideas through the lens of Eastern thought and/or through that of ancient Greek thought (especially Pythagoras, Plato, Homer, and Sophocles) in tandem with her views on Catholic spirituality.

The import of Thibon’s editorial maneuvering is also manifest in a chapter titled “The Great Beast,” this after Weil’s reference to it from Plato’s Republic. What concerned Weil was “the power of the social element” to harness individual thought. “The collective,” she stressed, “is the object of all idolatry.”

Against that backdrop, here is what Thibon opted not to include from the sections of her notebooks from which such passages were lifted: “The Church has been a totalitarian Great Beast.” And this passage: “The Church is a collective. Those who believe in Christ because of the Church, and not the other way around, are idolaters.” And then there is this passage, which was also left out: “The notion of Providence, in Catholic doctrine, comes from the Great Beast.”

True, Weil had a profound faith in the Passion of Christ and in the mysteries surrounding it. But her spirituality did not feed on the institutional history and imperial doctrines of the Roman Catholic Church. “She denied the Church’s right to impose beliefs on the faithful,” wrote Father Georges Frénaud, a doctrinaire defender of the Church, in a 1953 Theological Studies article.

For Weil, her faith was nourished by a sincere but complex kind of Catholic spirituality that traced back to Egypt and Greece and likewise resonated with certain teachings buried in Eastern texts, such as The Upanishads.

Simone was a catholic outside of the Catholic Church. “[I]f the gospel omitted all mention of Christ’s resurrection, faith would be easier for me,” is how she responded to a key tenet of Catholicism.

And when in Harlem, in 1942, she attended services at a Black Baptist church, she said of the experience that “one is transported with faith, Genuine faith.” Her spirituality was a multi-colored canvas, one not framed by established Church doctrines.

For all its value, Gravity and Grace was a world-famous book by Gustave Thibon’s Simone Weil. It was selected and organized in ways Weil herself never approved. It was offered up as her own work product by a man so very different from her. It was published despite a questionable right to do so. And it was presented in ways, however well intended, that did not do her thought full justice.

Ronald K.L. Collins is the co-director of the History Book Festival. His writings on Weil have appeared in the journal Cahiers Simone Weil, in the book Simone Weil’s Philosophy of Culture (Cambridge University Press, 1993), edited by Richard H. Bell, and, more recently, in the Independent and the Los Angeles Review of Books. The author thanks E. Jane Doering, Finn Nielsen, and Eric Springsted for their helpful comments.

The author of Dinner in Camelot comes to DC on Sunday, Apr. 8th, at 1PM.