The Exploits of an A-List Attorney

An engrossing look at early 20th-century lawyer Nathan Burkan and his larger-than-life clients. 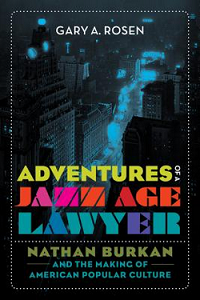 When an old hit by the Rolling Stones is heard as background music in a restaurant, an airport, or a supermarket, Mick Jagger hears the ka-ching of the cash register. But you can rest assured the rock star doesn’t sit up nights sending out bills to collect his royalties.

Instead, like 750,000 music copyright holders, he lets the American Society of Composers, Authors, and Publishers, known as ASCAP, do the work. As the licensing agency for 11.5 million songs, ASCAP monitors public performances of members’ work, collects money from users, and divvies it up based on a formula.

Without ASCAP, it would be impossible for copyright holders to keep track of where their songs were played and get paid for their use. This 106-year-old organization exists largely because of one New York lawyer, Nathan Burkan. This once famous but now obscure figure is the subject of the entertaining biography Adventures of a Jazz Age Lawyer: Nathan Burkan and the Making of American Popular Culture by copyright attorney and law professor Gary A. Rosen.

Lucky are the law students who get the witty Professor Rosen to guide them through the drudgery of the 1909 Copyright Act and the founding of ASCAP. Rosen, in awe of his awesome subject, calls Burkan “the veritable Moses of copyright law” and the “guiding spirit behind ASCAP.”

Most of the first 75 pages of the book are devoted to these endeavors, but those not reading for a grade can skip a lot of them. For the lay reader, the real treat is Rosen’s deft handling of Burkan’s life and times, plus the stories of his famous clients who managed to mess up their lives in outsized ways.

For fun, jump to the chapter entitled “Nightstick Censorship” which recounts when Mae West was the toast of Broadway in the Jazz Age, starring in “Diamond Lil” in one theater while a play she wrote was simultaneously staged in another. On October 1, 1928, two uniformed cops knocked on her dressing-room door, and before she could invite them to come up and see her, they hauled her off to the precinct.

There, she joined the 54 cast members of her play, “The Pleasure Man,” about female impersonators — including one who suffered a botched sex-change operation — who had been locked up the same night on indecency charges. The image of West and the entire raucous cast, some in drag, partying in the lockup until the precinct captain got fed up and released them on bail is priceless. As soon as the cuffs were off, West called Burkan.

Burkan handled the headliners. Charlie Chaplin. Al Jolson. Theda Bara. Impresario Flo Ziegfeld’s wife, Billie Burke (before she became Glinda the Good Witch in “The Wizard of Oz”). Cecil B. DeMille. Samuel Goldwyn. He represented Merry Widow Gloria Morgan Vanderbilt against her sister-in-law, Gertrude Vanderbilt Whitney, in their custody trial over Morgan’s “Little Gloria,” who, at 18 months old, inherited $3 million from her father, who’d drunk himself to death. (“Little Gloria” became better known in later years as the mother of overpriced designer jeans and CNN anchor Anderson Cooper.) This trial was one of his rare losses.

Burkan’s own story was that of a Jewish immigrant from Romania who arrived here with his family in 1886, when he was 8 years old. Brilliant but poor, he graduated from law school while still too young to sit for the state’s bar exam. He cooled his heels by working as a stenographer for a group of Jewish lawyers until he passed the bar.

When Burkan’s boss dropped dead in the middle of composer Victor Herbert’s defamation trial against a music journal that accused him of plagiarism, Burkan, just two years out of law school, took over. When he won $15,000 for Herbert — the equivalent of $425,000 today — his career was launched.

Meanwhile, Burkan climbed New York’s political ladder by aligning himself with Tammany Hall — known more in the early days for lending a hand to New York’s poor, immigrant community rather than for its iron grip on political patronage. In 1915, Burkan was a delegate to the New York State Constitutional Convention, where he stood for social justice, working to put the kibosh on literacy tests for new voters. He formed alliances with men who would one day be New York political powerhouses, including future Gov. Alfred E. Smith.

Burkan could have built his entire practice around the litigious Charlie Chaplin. In 1916, he negotiated Chaplin’s $670,000, one-year contract with the Mutual Film Corporation. Burkan sued knock-off artists who marketed Chaplin tchotchkes and fake Chaplin movies — although Chaplin balked at paying his bill. But Burkan proved to be worth every penny: He later negotiated Chaplin’s $1 million contract with First National that allowed the performer to retain the copyrights to his films.

Burkan also extricated Chaplin from two shotgun weddings to teenaged girls — the first to actress Mildred Harris, the second to Lita Grey — while protecting the actor’s fortune. In the first divorce, in 1920, Chaplin ran to New York “ducking process servers like he used to duck custard pies,” until Burkan negotiated a $200,000 settlement.

The second, in 1927, was more problematic. Grey alleged in a salacious complaint that he lied, cheated with multiple women, “including a prominent motion picture actress” (William Randolph Hearst’s mistress, Marion Davies), and demanded that she perform perverted sexual acts in the marital bed. On a cross-country train to New York, Chaplin blabbed to reporters about Grey’s accusations, against Burkan’s advice.

When he saw how poorly he came off in print, Chaplin took to his bed (or, more accurately, to the one in Burkan’s guestroom). A New York Sun headline read: “Chaplin Hides in Lawyer’s Home and Is Ordered to Quit Talking.” Chaplin would remain in Burkan’s Park Avenue apartment for months while his legal troubles mounted.

Chaplin sued an author for writing a magazine profile of him without his consent; the IRS slapped liens against him for back taxes; a Marine filed a copyright-infringement suit against him, claiming he was the author Chaplin’s World War I hit, “Shoulder Arms.” Burkan rescued him from all of it and still had time to represent mobster Frank Costello in his federal trial for conspiring to run a $25 million liquor-smuggling ring during Prohibition.

Burkan continued representing other front-page names in trouble with the law or with their spouses until, in 1936, he died of a sudden heart attack at 58, leaving a young wife and 5-year-old son. More than 2,000 mourners attended his funeral in New York City, including former Gov. Smith, Mayor Fiorello LaGuardia, Sen. Robert Wagner, and the heads of major Hollywood studios. Yet, today, he’s barely known.

Diane Kiesel is a judge of the Supreme Court of New York. A former journalist, she is the author of Domestic Violence: Law Policy and Practice, published in 2017 by the Carolina Academic Press, and She Can Bring Us Home: Dr. Dorothy Boulding Ferebee, Civil Rights Pioneer, published in 2015 by the University of Nebraska Press/Potomac Book imprint. She is currently at work on The Trials of Charlie Chaplin: How the Federal Government and One Woman Drove the Little Tramp from the United States, to be published by the University of Michigan Press.