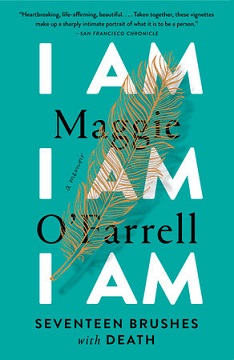 Before Maggie O’Farrell wrote Hamnet, her award-winning 2020 novel that reimagines the life and death of Shakespeare’s only son, she examined her own life and death in a memoir entitled I Am, I Am, I Am: Seventeen Brushes with Death.

While most people fear what W.C. Fields called “the man in the bright nightgown,” O’Farrell claims to be sanguine about death, and she makes her case as someone who has outwitted the scythe 17 times in 49 years. Still, if not for her luminous writing, the book might not beckon.

O’Farrell takes her title from Sylvia Plath’s The Bell Jar, a fictional descent into madness in which the protagonist survives suicide and lives to feel her brave heart beat evenly: “I took a deep breath and listened to the old brag of my heart: I am, I am, I am.” That regular rhythm signals life, and O’Farrell’s book offers an affirming message about escaping death.

In 17 short chapters about the 17 body parts affected by her own near-fatal experiences, O’Farrell hopscotches across time to recount her gambols with the Grim Reaper, including “Neck (1990),” “Body and Bloodstream (2005),” and “Cerebellum (1980).” Each essay is introduced with a sketch of the part — neck or body and bloodstream or brain — to be discussed.

She thinks there is nothing unique about a near-death experience and claims they’re not rare:

“[E]veryone, I would venture, has had them…perhaps without even realizing it. The brush of a van too close to your bicycle, the tired medic who realizes that a dosage ought to be checked one final time, the driver who has drunk too much…the aeroplane not caught, the virus never inhaled.”

As a child, she writes, she was an escapologist. “I ran, scarpered, dashed off, legged it whenever I had the chance…I wanted to know, wanted to see, what was around the next corner, beyond the bend.”

At the age of 8, the super-charged little girl’s life changed forever: She woke up with a headache and could not walk. She had contracted encephalitis. She was close to death and hospitalized for weeks with fever, pain, and immobility. Suddenly, she was a child who could barely hold a pen, who had lost the ability to run, ride a bike, catch a ball, feed herself, swim, climb stairs, and skip. She was a child who traveled everywhere in a humiliating, outsized buggy.

From the hospital, O’Farrell was blanketed like a baby and carried home to spend many more months in bed, and then a wheelchair, followed by hydrotherapy and physiotherapy, and finally recovery. She recalls that searing experience as “the hinge on which my childhood swung”:

Without self-pity, she recites the illness’ devastating aftereffects: As an adult, she loses her balance and can’t walk a straight line or stand on one foot. She frequently falls over, drops silverware, and cannot cycle long distances.

The self she became — her after-self — was dogged by disappointment, dashed dreams, and near death. She loses her track to a Ph.D. and an academic career at the age of 21 because of inadequate grades; she nearly drowns in a riptide; she is held up at knife point; and she bolts from a live-in boyfriend after finding a flesh-colored bra under the bed that is not hers.

After the latter incident, she waits “the requisite time” for a virus to appear, grabs her gay friend, and insists they go to a clinic to get tested. The receptionist gives each a page to fill in about previous sexual encounters. Her friend looks at the form and delivers the only risible line in this book: “Do you think you’re allowed to ask for extra paper?” he asks “a little too aloud.” (Needing comic relief from O’Farrell’s unremitting woes, I, too, laughed a little too aloud.)

O’Farrell writes luscious sentences about grim subjects, particularly her attempts to conceive, only to have to cope with a wretched miscarriage:

“Something is moving within me, deep in the coiled channels of my stomach, something with claws, with fangs, and evil intent…It is as though I have swallowed a demon, a restive one that turns and fidgets, scraping its scales against my innards.”

She suffers so many miscarriages that she and her husband refer to the doctor’s office as “the bad-news room.” Later, when she finally carries a pregnancy to term, she spends three agonizing days in labor — an excruciating experience considering the average labor for a first-time mother is six to 15 hours.

She faults “the highly politicized arena of elective Caesareans in the U.K.” and excoriates as a butcher the British doctor who kept denying her a C-section. She describes the surgery in such visceral detail that you cringe, almost feeling the surgeon slice across her stomach and the nurses wrestling and grappling and clutching and heaving, until finally her body ruptures, spraying blood everywhere. Another near-death experience, but one that produces her first child.

All the literary reading that O’Farrell poured into her doctoral studies is on fine display in these pages. Among others, she references Shakespeare, Thomas Hardy, Seamus Heaney, Arthur Miller, Hilary Mantel, Robert Frost, Mark Twain, and Andrew Marvell’s “winged chariot,” which carries her into elegant riffs with a scholar’s vocabulary:

“The wave turns me over…like St. Catherine in her wheel”; “like Brueghel’s Icarus falling into the waves”; “the stifling anhydrous scent of sawdust”; “with a tiny rhomboid of garden”; “watched from the ceiling by a leucistic gecko…”

In I Am, I Am, I Am, Maggie O’Farrell rings all the bells for impressive prose, albeit on a subject of little poetry.