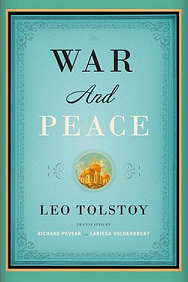 I’ve yet to watch a screen adaptation of War and Peace. It’s not that I doubt Tolstoy’s ranging lifescape of a book can be tamed and interpreted for viewers. It’s that I’m loath to exchange my already-cinematic visions of characters who are as lucid to me as recent experience.

Like the expression on Nikolai Rostov’s face during his first battle, when he shrinks back from the carnage to contemplate the waters of the Danube. Or his sister, Natasha, a girl with flashing black eyes and a secret joy in her soul, singing solfeggio in the ballroom.

Like Natasha’s future sister-in-law, Marya Bolkonskaya, on the floor, shuddering with pain after being beaten by her father. Or Marya’s brother, Prince Andrei, leading the charge into French cannon fire with nothing to protect him but the Imperial Russian flag. And Pierre Bezukhov, dancing around with that young bear.

Holding a bear cub is apt for a work that bristles with play and wonder yet remains heavy, feral, dangerous. Indeed, Tolstoy’s masterwork plunges a paw into the cross-streams of two Russian families who hunger for glory and whose personal expansions and regressions are charted throughout the Napoleonic Wars.

Equally, War and Peace doubles as an erudite rant about East versus West, with contrasting and often humorous portraits of two opposing military titans, Russian Commander Mikhail Kutuzov (1745-1813) and Napoleon.

Tolstoy’s Kutuzov “saw thousands of contingencies instead of two or three and based nothing on them.” The sage Kutuzov knows, in other words, that the arc of history isn’t bent by the arm of only one man or woman, whereas Tolstoy’s Napoleon swipes at his runny nose and ruminates over how he could possibly falter in the Borodino offensive when he was so successful everywhere else.

Which begs questions. How are we to know which way to turn on the battlefields of life? And what, exactly, are the forces that determine the unfolding of history?

The central tenet of War and Peace, if it can be said to have tenets, pokes forcefully at Western thought and perhaps the whole of the Enlightenment. Tolstoy tells us, repeatedly, that we can’t get to the bottom of our quandaries — solve some trouble here and watch a new problem pop up over there — and that our flight toward strategy and theory (even the scientific method, in some cases) says more about how we cope with ontological apprehension than how we struggle for clarity.

Yet Tolstoy himself can’t resist the siren call of “root causes” and wrestles with epistemology throughout War and Peace in the form of philosophical asides that perhaps protest a little too much. He, too, wants to know why and how, but the knowledge he seeks has an alternative quality, something closer to what his character Pierre knows after he’s caught up in the Battle of Borodino, taken prisoner, nearly executed, and then marched through a burning, French-occupied Moscow.

Nikolai’s surging desire to be recognized as a war hero has him ironically falling off horses and fleeing into bushes. His impotence — he gets cheated at cards, he causes his family to go further into debt, and he can’t marry Sonya — doesn’t find relief and implodes during the wolf hunt, as he approaches the cornered animal with his blade, only to get waved off by one of his betters.

When Nikolai finally wins the stale victory of knocking a French officer from his horse, the “moral nausea” he feels comes from an altogether different type of recognition than the one he’s after; it’s Nikolai who sees something in this would-be opponent, with his blue eyes and dimples.

But brotherhood has its complexities. If Nikolai’s being touched by the exchange with the captive soldier shows him there’s another, more profound type of triumph, Pierre’s being mistaken as French (by the French occupiers!) is both a strange and morally confusing point, among many, in his mission.

Here, one ponders the psychological disruption French aggression would have had on a Russian aristocracy who, up until the day Napoleon crossed the Neman River, had been culturally pointed (as all European courts were) toward French language and values. It’s rather like being at war with oneself, which is what Nikolai begins to understand inside the crush of battle.

According to Prince Andrei, too much knowledge is a forerunner to death. Lying on the battlefield at Austerlitz, he looks up into the face of his much-vaunted (but adversarial) war hero, Napoleon, and doesn’t find what he expects. Insignificance and malice are the only qualities Andrei senses in this figure of a man who once gave purpose and shape to his life. “Ah my friend,” he says later, to Pierre, on the eve of Borodino, “it has of late become hard for me to live. I see that I’ve begun to understand too much.”

For a thinker and writer like Tolstoy, real knowledge comes from personal experience, not from the second- or third-hand sources of recorded history and other texts. Pierre thus discovers his life’s purpose, “to harness all these thoughts together” by being open to (that is, authentically witnessing) humanity’s minimums and maximums, which happen — his hellacious marriage to Yelena, his transcendent friendship with the peasant Platon — during both wartime and peace.

Between Dostoevsky and Tolstoy, it’s Dostoevsky who assumes the mantle of religious author. Yet, in War and Peace, Andrei’s witnessing Anatole’s divinity in the terrible moment when Anatole is shown his own amputated leg (the boot still on), is a far more convincing “come to Jesus” moment than Dostoevsky’s Raskolnikov falling at the feet of Sonya near the end of Crime and Punishment.

Andrei becomes spiritualized when he sees how fate and contingency can punish his enemies worse than he ever could, which is the most convincing case for forgiveness, in my heretical opinion, that literature has ever offered.

The men in War and Peace soften as they gain perspective on life and their place in it, whereas Tolstoy’s women set out with their minds and hearts in metaphysical realms and then move toward more practical concerns.

The bewitching teenaged Natasha avoids “knowing” and lives through instinct, gleaning what she needs by reading people’s faces and moving forward on impulse and fantasies, as when she sears her arm with a hot ruler to express love for her orphaned cousin, Sonya. This Natasha is scarcely recognizable from the hardy, pragmatic woman she ages into (“her soul was not visible at all”), who feels jealousy toward Sonya and who devotes herself to rearing a brood of children.

Likewise, the book’s saintly figure, Marya (modeled on Tolstoy’s mother, who died when he was small), has powerful religious experiences that will prove hard to sustain. Her passage from prayerful solitude to marriage and motherhood presses her competitor, Sonya — poor Sonya — into a life of celibacy. By the end of the story, Marya’s conviction that “Everything understood is everything forgiven” gets put to the test as she stares down married life under the same roof as her husband’s former flame.

If English is envied on account of its outsized vocabulary and grammatical flexibility, Russian is adored for its rich nouns (among other elements), which convey simultaneous meanings across a single word. The “Mir” in Voina i Mir (War and Peace) translates to “peace,” but it also means world, society, quietude, village, kingdom, universe, universal, and more.

And, so, just as Tolstoy communicates his multiple understandings of the war between Russia and France, the differences between East and West, the battles between men and women (and men and men, and women and women), the chasm between peasant and noble, and the gap between personal transformation and knowledge, so, too, has he magnified those delicate absolutes in the enduring quest for serenity.

Dorothy Reno is a classic-books columnist for the Washington Independent Review of Books. If you would like to share your impressions of War and Peace, we’d love to hear from you. You can join Dorothy in reading Iola Leroy: Or, Shadows Uplifted, which will be the subject of her next column on November 16th.