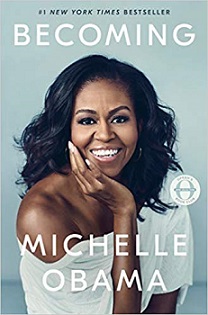 A few months ago, Michelle Obama zoomed to the top of the bestseller list with Becoming, and set the gold standard for writing a masterful memoir. As wife of the nation’s first African-American president, she has an extraordinary story to tell, and she tells it with sublime grace, substance, and style.

In reading it, you’ll understand why she is packing auditoriums around the world, selling out huge venues like the Royal Arena in Denmark, the Oslo Spektrum, Amsterdam’s Ziggo Dome, and the AccorHotels Arena in Paris. In civic auditoriums around the U.S., people beg to pay upward of $1,000 a ticket to hear the most powerful African-American woman in the world tell her story.

In the book, Obama addresses her most controversial moment in the 2008 presidential campaign when she said that “for the first time in my adult life I’m really proud of my country.” At the time, she was criticized for the comment by those who felt she sounded like an angry black woman who was unpatriotic. She writes that she meant nothing racial by her words, merely that she was expressing gratitude for the many energetic campaign workers.

Days after the book’s publication, she got criticized again, this time in a New York Times op-ed by a black female professor from Antioch University who urged Obama to own the full weight of her words from 2008 and broaden the narrative to discuss black discontent.

Many will find Becoming to be a heartfelt dissertation on race, and the White House is a perfect setting for Michelle Robinson Obama’s story because she’s more closely tied to the site than any of her predecessors. She frequently introduces herself to young African-American audiences as the great-great-granddaughter of Jim Robinson, a slave from South Carolina. Enslaved people, like her own ancestors, built the mansion, which has housed 44 white presidents, several of whom owned slaves.

She knows she carries history with her, but it’s not the history of presidents and other first ladies:

“I’d never related to the story of John Quincy Adams the way I did to that of Sojourner Truth, or been moved by Woodrow Wilson the way I was by Harriet Tubman. The struggles of Rosa Parks and Coretta Scott King were more familiar to me than those of Eleanor Roosevelt or Mamie Eisenhower.”

Obama writes about growing up as an urban black child on the South Side of Chicago, always feeling “other.” She relates an incident when she and her brother were children that taught them “the color of our skin made us vulnerable [to attack]. It was a thing we’d always have to navigate.” Throughout the book, she underscores race and the constant vigilance people of color feel forced to bring to their encounters in white America.

She emphasizes her roots in a close-knit, working-class family, where her parents knew that education was the best way up and out. But while Michelle Robinson soared up — graduating from Princeton and Harvard Law School — she never flew out. She remained committed to her city and chides Maureen Dowd for calling her “a princess of South Chicago” in the New York Times.

As first lady, she tried to rally support for violence prevention there, meeting often with community leaders and social workers in the inner city. Yet she leveled with students from the ravaged area: “Honestly, I know you’re dealing with a lot here, but no one’s going to save you anytime soon.”

She told them the only way out of their mess was to “use school” as she had. She saw herself as a testament to what was possible. “I felt it all personally. Education had been the primary instrument of change in my own life, my lever upward in the world….”

Since African-American children are more likely to be overweight than their white counterparts, the former first lady, who works out regularly, launched “Let’s Move,” and, with an emphasis on eating more nutritiously, was determined to end childhood obesity within a generation.

Yet even this worthy objective drew partisan criticism. Rep. Jim Sensenbrenner (R-Wis.) complained to his constituents about Obama lecturing about obesity with “her big butt.” The congressman, who looks to be the size of a food truck, later wrote a note apologizing to the first lady for commenting on her “large posterior.” Still, she felt mocked.

“I was cut down for being black, female and vocal. I’d felt the derision directed at my body, the literal space I occupied in the world.”

She wallops Donald Trump for his “yammering, inexpert critiques of Barack’s foreign policy decisions and openly questioning whether he was an American citizen…with his loud and reckless innuendos he was putting my family’s safety at risk. And for this, I’d never forgive him.”

Having been advised by Hillary Clinton never to get in front of the president, Obama went to great lengths not to insert herself into West Wing business — to such an absurd extent that her staff felt it was necessary to consult with the president’s staff when she “decided to get bangs cut into my hair…just to make sure there wouldn’t be a problem.”

She captures the essence of her husband’s sterling idealism when she quotes him as saying, “You may live in the world as it is, but you can still work to create the world as it should be.” She was understandably angry when Sen. Mitch McConnell (R-Ky.) declared a year before the 2011 election: “The single most important thing we want to achieve is for President Obama to be a one-term president.”

She writes that her husband took the high road, reminding her of “an old copper pot — seasoned by fire, dinged up but still shiny.”

Michelle Obama shines, too, in a most becoming way.

Kitty Kelley is the author of seven number-one New York Times bestselling biographies, including Jackie Oh!, Nancy Reagan, and The Family: The Real Story Behind the Bush Dynasty. She is on the board of Reading Is Fundamental and the Independent.