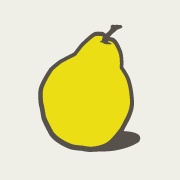 The motto of Yellow Pear Press is “free range publishing,” signifying an interest in releasing a wide variety of books, including those that might not be typical for the average small press, such as travel guides and journals.

“Our goal is to publish clever, distinctive, imaginative, beautifully designed books and journals with a certain joie de vivre,” says founder Lisa McGuinness. “So, if a submission fits that description, we would certainly consider it.

“We want to be able to publish a variety of books that fit our description rather than publishing all fiction, or all cooking, or all journals. It gives us some freedom while still keeping a distinct, cohesive sensibility.”

The name of the San Francisco-based press also reflects this sentiment. McGuinness describes the yellow pear in the same terms as the press’ books: “nourishing and beautiful.”

One theme that does run through Yellow Pear’s books is food. The press has released two titles in its Local Eats travel series, focusing on all aspects of the culinary life in Paris and London. Farmsteads of the California Coast, by Sarah Henry, is a lushly photographed tour of the diversity of organic farming, featuring profiles of subjects such as shellfish harvesters and water buffalo ranchers. And in her memoir, My Culinary Journey, Georgeanne Brennan shares stories about her life in Provence through prose and recipes. Even a book about yoga is set in the kitchen.

But Yellow Pear’s “free range” goes beyond travel and food. Their recent release, Fierce Kindness, is a guide to inspiring positive change in society through non-violence and positive thinking. The Wrong Dog, by David Elliot Cohen, is a touching account of one family’s accidental adoption of a puppy that quickly grows into a 90-pound dog with a huge personality. And through its Bonhomie imprint, the press also publishes select fiction.

The literary diversity reflects McGuinness’ own background as an editor and writer. For years, she worked at Chronicle Books. She has also penned a number of books herself, including a novel, a children’s book, and a journal. Her publishing background has definitely influenced how she approaches the literary community.

“Because Yellow Pear Press is small, I would say we are able to have a more intimate relationship with independent bookstores in particular,” McGuinness says. “We've enjoyed building relationships in the community. That's been one of the most enjoyable aspects to starting the company.”

Still, the transition from being an employee at a publishing company to running her own press has had its challenges.

“The most surprising thing for me has been how much time marketing takes!” McGuinness says. “Because I come from the editorial side, I had no idea what a time-consuming effort goes into marketing. The first hire I made was to help with that aspect of publishing.”

Still, bringing Yellow Pear Press books into the world has been worth navigating the learning curve.

“The most rewarding aspect is seeing the finished books and watching people interact with them,” McGuinness says. “Hearing people talk about how gorgeous and interesting they are has been fantastic, and of course working with the authors, designers, photographers, and illustrators is creatively invigorating. I love it.”

4 Ways to Make Your Memoir Compelling

Ready to turn your life story into a story? Heed these tips from one who’s been there.