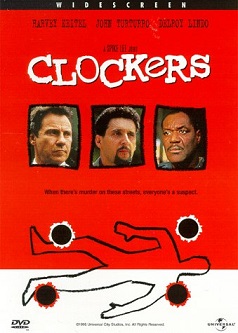 I have no idea where the copy of Richard Price’s 1992 novel, Clockers, came from. I found it, dusty with yellowed pages, around the house. I have read a couple of Price’s novels in the last year — one good, one okay — so I took a taste.

The book grabbed me and wouldn’t let go. It’s a close-up story of a small-time drug dealer and a police detective. The nasty streets of Northern New Jersey feel true. The characters are compelling.

Strike, the street name for Ronald Dunham, is too smart to be peddling drugs and too pacific to survive much longer at it. He’s a middle manager in the trade. His peers respect his acumen but don’t fear him; it’s a formula for failure, and he knows it. That’s why he has a bleeding ulcer.

Price depicts the revelation about drug dealers that was later popularized in the economics book Freakonomics: Most make such lousy money that they live with their moms and grandmoms.

The cop, Rocco Klein, has a semi-ridiculous backstory (a much younger, trust-fund wife), presumably inserted to reinforce class contrasts. But all is forgiven because Rocco is such a bulldog of an investigator, weighed down by the lies that everyone tells him while he tries to make justice happen in a world where few expect it.

It’s a long book, but it doesn’t feel like it. The writing is often pitch-perfect. The ending is awful, ironic, moving. I’m still chewing on it.

Clockers made me want to know more about Price. He was one of the writers for the powerhouse cable TV series “The Wire.” He wrote the screenplays for good movies like “The Color of Money” and “Sea of Love.” Also, it turns out, for the Spike Lee movie “Clockers”!

Whoa. How did I miss this one? I had to see it. In the magic of this digital age, I was able to stream the film at home for $3.99 through some giant company that knows everything about me. Renting “Clockers” presumably will bring me a spate of email offers of pharmaceuticals and handguns.

I queued the movie up, gave the customary pep talk to the long-suffering spouse (“A Spike Lee movie based on this amazing urban book — with Harvey Keitel and John Turturro! It’s got to be great!”), and settled in.

I was asleep in an hour.

Now, I drop off during performances more than I like to admit. It’s a stage of life, like puberty. You turn down the lights, get in a comfortable seat, and…hey, what did I miss?

But it is the ultimate, unforgiving verdict on a film. Good ones keep me awake. “Clockers” the movie, despite the amazing talents that combined to make it, is a miss. The depth of characters? Not visible. Strike’s inner torment? Not plausible; he’s reduced to a scummy street peddler. Detective Rocco’s Sisyphean struggle with the urban swamp? Wearying, not fascinating.

“Clockers” is a reminder that great books often can’t be squashed into the two-hour storyline of a feature film. The novel is too rich, too full of telling details and sad circumstances. It needs time. It might make a great 13-part cable series.

Buy the book. Skip the film.

David O. Stewart writes fiction and nonfiction. His most recent book, released on February 10, 2015, is Madison’s Gift: Five Partnerships That Built America. He also is president of the Independent.

A recent Publishers Weekly poll raises more questions than it answers about "The Great American Novel."

The Uses of Libraries

As a teenager, I used to frequently walk to the public library in the much wealthier neighboring town, where I loved to browse and with my county-wide library card could even take books out.