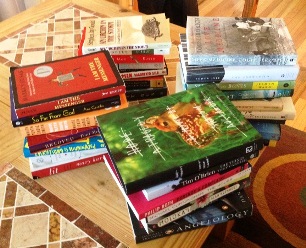 Hello, my name is Josh and I’m addicted to buying books. Like the couple in the movie “Smashed,” this is a vice my wife shares. It’s not that we don’t read them, it’s that the reading and the buying are not in synch. Last fall we agreed (grudgingly, I might add) to a moratorium on purchasing new books until we caught up with more of the ones already on our living room shelves. But we couldn’t hold out forever, and when our colleague at the Independent, Becky Meloan, told us about the Stone Ridge Used Book Sale, it was beyond our abilities to resist. 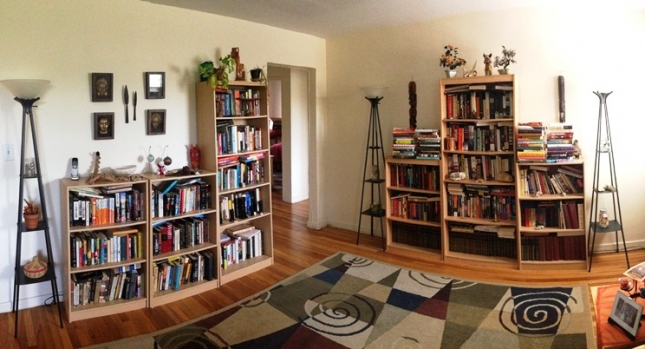 our living room, before we went to the used book sale

Imagine three gymnasiums filled with books (“14 miles of books,” we were told), all organized by genre. Pretty soon I could hardly hold all the books I’d picked up, and my wife also had her hands full.

“I’m going out to the car to grab some bags,” I told my wife, but just then I ran into Becky (who works at the sale).

“Use a box,” she suggested. There were boxes lying all around the place.

We stayed for two hours, and the box – it probably goes without saying – was full.

We picked up a few books we’d learned about through our work with The Independent.

As a special bonus, we found out when we got home that one
of them, Blood Chit by Grady Smith, had its own bookmark and was signed by the
author. 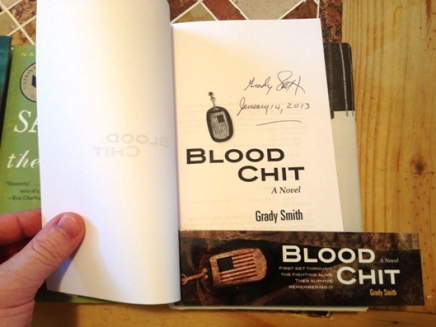 I picked up several books that had been on my Amazon
wishlist, some of them for years.

We managed to find other works by authors we enjoyed, like
Louise Erdrich, Colson Whitehead, and Dagoberto Gilb. 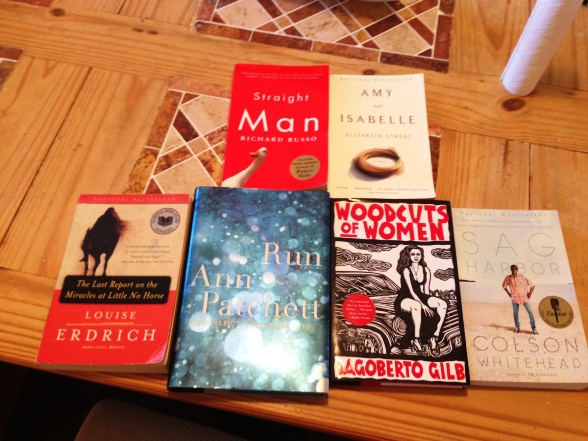 I picked up books by several authors I’ve been curious about
for a while, like Toni Morrison (who we saw at the National Book Festival) and
Zadie Smith.

I found a book of essays about books and ideas by Stephen
Jay Gould I hadn’t known existed. 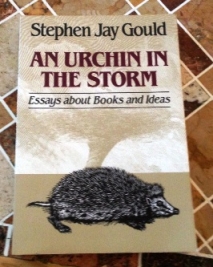 And picked up a few other books I’ve wondered about. 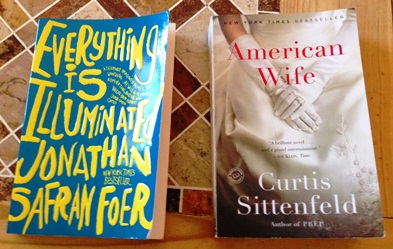 We bought 30 books, people. It’s
not the money: these were used books and the prices were great. But when are we
going to read these?

And where in the heck are we going to put them???

The Internet Is Buzzing

Some interesting news and opinion about books from various and sundry sites, accompanied by snide commentary.

How problematic is the application of Big Data methods to literature? That is: is there a problem in taking huge swaths of literature and subjecting them to data mining techniques?