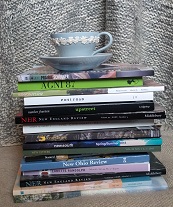 Every year, tens of thousands of writers across the world snip off little pieces of their soul and send them to the literary magazines they hope will give those stories, essays, or poems a bit of time in the printed (or digital) spotlight.

Literary magazines are vibrant canvases for the freshest work the world of letters has to offer, and they publish authors ranging from the experimental unknown to the already famous. In literary magazines, I’ve found my new favorite poems, met new writers whom I’ve turned into friends, and opened windows into worlds I couldn’t have otherwise imagined.

Someone, however, has to sift through the deluge of submissions magazines receive and select the pieces that best reflect a publication’s ethos or style or taste at that moment. Literary magazines receive anywhere from hundreds to thousands of submissions for a particular issue, and often the lead editors don’t have the ability to read them all with the care they deserve.

So, the magazines turn to first readers.

It’s a ton of work to read submissions. I’ve done it for an online mentoring contest, and no matter how exciting it is to read someone else’s stories, after a while, it can seem like your heart has been drawn and quartered because it’s being pulled in so many literary directions.

As we do in this column, I wondered why would anyone put so much time into someone else’s work?

For Melody Steiner, a fantasy and mystery writer, the answer was simple.

“I wanted to be a part of the process in some way, to be the ‘yes’ person in some other writer's journey. I write, and I know how very tough those rejections are. Getting to say, ‘Yes, I love this’ was a really fun part of the job,” she told me.

But getting to that fun part took a lot of work. Melody has read for both an anthology and a prominent science-fiction/fantasy magazine, and though the processes were different, they both involved a ton of words. For the magazine, she read 40 or more stories a month.

“It took time, with the volume of submissions, but honestly, I enjoyed doing it,” she said.

I tried to get Melody to dish on what she didn’t like about doing first readings, but she said there wasn’t much to dislike. Writers would disregard formatting guidelines — which really are important because they make reading easier for these volunteers and prevent eye strain and headaches — but there was so much more to enjoy.

In April, the science-fiction magazine she read for included a story she’d advocated for.

“It was the writer's first pro sale. It was also the first story I had recommended to the editors that made it all the way to publication (they have a very competitive acceptance rate due to the high volume of submissions and their reputation). I can't even explain how it feels to get to be a part of that writer's journey, to make that kind of difference for someone — and it's all under the radar. I'm so glad I got to see the story published,” she said.

Writer and MFA candidate Suzie Eckl echoed that sense of generosity and pride when talking about her first reading work. She volunteers at a prestigious literary magazine, although you’d think a student in a demanding program wouldn’t have much time to read other people’s work.

“I don't have any quotas or anything like that,” Suzie said. “But I do read a lot because I enjoy it. In fact, I often read submissions as a break from my other work as an MFA student. Reading submissions makes for fabulous procrastination because I'm still learning and being productive — even if I am ignoring my homework.”

Being a first reader has helped both Melody and Suzie think about their own writing and how to stand out in the slush pile. But it’s also taught them about people and our moment of time on this planet.

“It was amazing to me how, one night, I could open up the slush pile and read five stories in a row dealing with the same theme,” Melody said. “The collective unconscious is strong in the slush pile. It seems we are all mostly resonating at the same frequency. As an empathetic person, that is startling to see. As a writer, it's humbling.”

The writing ecosystem is driven by the unseen volunteer work of readers like Melody and Suzie. As Francine Prose writes in her classic, Reading Like a Writer, “If we want to write, it makes sense to read.”

It’s inspiring that these volunteers not only find the reading a way to improve their own craft, but also a way to deepen their humanity.

What more can we ask of one another?

Carrie Callaghan’s debut novel, A Light of Her Own, was published last year.