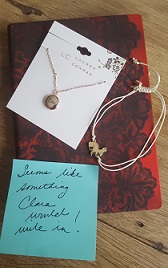 A 72-year-old woman with shorn blue hair sits bereft in Beirut. She has lost everything — her only love and, most recently, the 37 translation manuscripts she has devoted her life to creating.

Then, to her surprise, the three neighbors she calls “the witches” show up.

“I feel nostalgic for my once arid heart that knew how to cope with loss,” she tells us as she weeps.

The narrator of Rabih Alameddine’s An Unnecessary Woman is both undone and remade by the kindness of these virtual strangers. The women help her recover her translations and, more importantly, think about them differently.

We don’t have to hit rock bottom for unexpected kindness to have an impact.

One day last fall, I checked the mail and found that Catherine Bakewell, fellow writer of historical fiction and (in her case) historical fantasy, had sent me a beautiful edition of We Have Always Lived in the Castle by Shirley Jackson. She sent this for no reason other than that she wanted to do something kind for me.

Last fall was a stressful time for me, right before my book launch, and Catherine’s gift left me smiling.

That got me thinking: If I pulled on this thread of kindness, where would it lead? Who had done kindnesses for Catherine, and why? Then, who had been generous before that?

So I asked her.

What follows is a tale of four writers.

Catherine immediately came up with three examples of people who had been cheerleaders for her or who had sent her gifts at a moment when she needed the writerly solidarity. In one case, another writer had sent her an encouragement bundle: a letter, notebook, necklace, and bracelet that reminded her of Catherine’s charming historical fantasy about a young witch learning to control her flower magic.

Catherine, who has worked very hard on that novel, was deeply touched by her friend’s thoughtfulness.

That friend, Bethany Hensel, is a writer and editor whom Catherine hasn’t met in person. But after they connected online, they became, as Catherine put it, like Timon and Pumbaa from “The Lion King.”

Bethany, who, in turn, calls Catherine “the most giving person,” told me that she was so grateful that she had someone to lean on while revising her manuscript. “It was a joy finding the perfect little gift items for her,” Bethany said.

Since Bethany is also a writer, she relies on the honest opinions of her writer pals to help her with her work. She raved to me about Tiffany Reisz, who “has never not replied to an email, and she's never not been a supportive person,” Bethany said. Tiffany has the kindness to give Bethany her best, honest advice, which is both brave and generous.

“If the dress makes me look fat, she's going to tell me,” Bethany said, laughing.

“It’s very sweet and a little silly she’s saying I’m nice to her when she was the one helping ME out,” Tiffany said about Bethany. Tiffany, who is the USA Today-bestselling author of the Original Sinners series and other acclaimed books, had trouble even knowing where to begin when I asked her who had been kind to her.

There were more people than she could count, she said, but a recent kindness at the 2018 Romance Writers of America (RWA) conference — where she was sick with a sinus infection and stressed about the massive conference — stuck out in her mind.

There, she got starstruck. Tiffany introduced herself to Beverly Jenkins, one of the original Queens of Romance, and Beverly replied, “The Red?”

That’s the title of one of Tiffany’s books, which Tiffany acknowledged.

“I liked that. That was hot,” Beverly said.

Tiffany was floored that such an icon would have read and remembered her book. Later, Beverly followed it up with a tweet highlighting The Red.

“I don't know if these legendary OMG writers realize how much it means to us newer writers to be read by and appreciated by these big-name authors, but it means the world and I'm grateful for Ms. Bev's kindness. And her books, of course. She's a legend for a reason,” Tiffany said.

In just a few short steps, we’ve arrived at the renowned Beverly Jenkins. She’s a multiple-bestselling author, with awards and accolades galore. According to the Detroit Free Press, “Beverly Jenkins has reached romance superstardom.”

She had finished reading Tiffany’s book just before the Denver conference.

“I saw her name tag and shared what I thought. I've been a published writer for over 20 years, which means I'm a tad older than most of the RWA members. The national conference can be scary if you're new. It's big, it's loud, it's crazy, so sometimes a quick smile or a word of encouragement from an established writer can help ease that first-timer anxiety,” she said.

Beverly’s belief in paying it forward comes from the kindnesses she received when she was just starting out (and, I suspect, her personality and heart).

“When I began my career, the women of RWA's mid-Michigan chapter took me under their wing and showed me a similar kindness. They were helpful, answered questions, and treated me like family. I try and do the same.”

That sounds like pretty good advice. You never know whose heart you will heal or whose load you will lighten, and people really will pass the kindness on.

Carrie Callaghan’s debut novel, A Light of Her Own, came out from Amberjack in 2018. The novel examines the life of 17th-century Dutch painter Judith Leyster. Carrie would love to hear your thoughts on paying it forward via Twitter at @carriecallaghan or via her website: www.carriecallaghan.com.