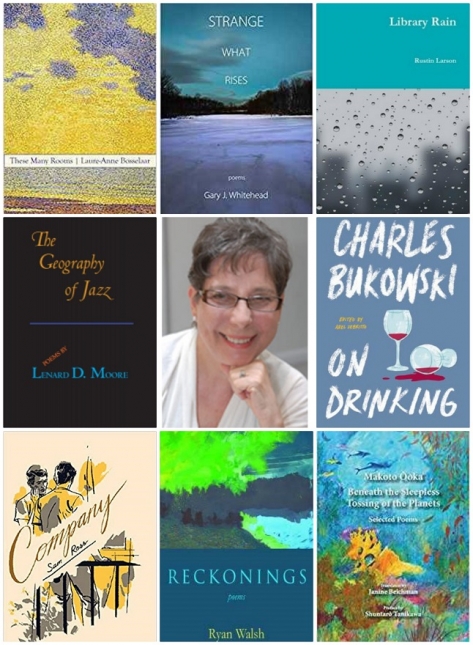 Sam Ross is an important poet because he writes of important matters: the life and death of kindness, survival under attack, the exquisite price of humanness. There’s Ross’s presence in every poem on every page, and the realization that it takes fire inside a poet to spark the page. The music he speaks comes from word placement on the page — using space as harmony. Are these dreams, or cries, or reports, or all? We only know the truth is pitch perfect, and it’s there.

Did I fill my mouth with salt?
Did I equate night and affinity?

Were there two lampposts in the forest?
Did I need to be right

or did I dare abandon? What bewilders
a compass? What good is

a life spent tracing the light
on friends’ faces fading in the street?

When a lover asks you
to wash your feet before bed

will you sleep? Imagine clotheslines?
Weren’t the lakes north of here

named after legends
who had drowned in them?

What poet does not write of grief, for that’s the poet’s work — yet, who can write it as if it’s never been said before? The one who owns it. The one who’s inimitable in the perseverance, and from this can come an elegance of speech that makes you believe in life. From the rubble of demise, come pristine words — you wonder if death really can be made beautiful by those who look at it. This writer speaks of permanence — then how is it that there’s so much motion and vitality. Doesn’t “permanent” mean stop? No, here it means replaced with a shining goal. Maybe Bosselaar knew love was in every line; but she shows, by the writing, so is hope?

I Forget to Listen

To the silence after the rain,

after a slammed door,

or a telephone’s last ring.

& to the silence in you, friend.

that I forget to hear the silence in you.

“where does the hermit sing /when the seething ends/and the frosts begin?” (Rough Terrain). Whitehead writes 94 pages of poetry, not one syllable out of sync. This poetry is acoustically perfect and intellectually honest — two things seldom found together. He reveals — by way of location, sound, and visuals — an arc within each story where we learn what is beautiful. I would encourage students of poetry to read this book for its foundationality in what poetry can be. This poet can be a motivator for writers.

So cold we made bonfires on the ice,
the hair beneath our caps as gray as the day,
which was as gray as the ice but streaming
low-slung light. Some of us in skates
that wrote the hours we moved through,
a score for two pianos or the pendent branches
that shook their glass chimes when the northerlies blew.
The lake, too, with its boom and whistle,
its lightening cracks we chased to the shrinking edge
where the water rocked dark against the shore.
More light! Why should one brief day
typify a life? Looking back, I remember
looking back. At the eyes of our fires blinking.
At the sun sinking into bare, black trees.

Makoto Ooka (1931-2017) was among Japan’s greatest poets and critics. This compendium is a re-publication of the translator’s 1995 renderings in English, covering selected poems from 1972 to 1989 from seven volumes. The original Japanese texts are included in the second half of the book and the prose work is represented as well as the poems. Ooka comes as much from the French surrealist traditions than he does ancient Japanese script; he’s a combination of Seurat and Basho. It’s delightful to read an Asian sensibility enveloping the surreal and the fantastical. There’s a modernism here with contrasts of complicated visions and basic simplicities. These elements, combined, project an unusual and original voice; and a singular spirit. This is a consequential poet in a posthumous edition that we’re lucky to have available.

All I can say about Larson’s book is that I wish it were longer. I wish there were more of it. He makes everything greater because he’s a smart singer, every poem is a win. Moments shine with an unselfconscious voice. We cannot imagine how easily paint can be applied if we just speak in real time of consequential things with a depth of heart. Within that modest framework the passage of words has a capability and a sphere of influence without limits. The poetry dynamics here are a genuine voice, believable encounters, and the ability to make everything new with the belief that no one’s watching you, and nothing can come of it, and there’s nothing to get. This is poetry at its best.

I soak my sleeve in water just to foul things up a bit,
Create a small level of misery, to keep the defense
Honest. A white fence surrounds our courtyard
Where sometimes we sit in the sun dreaming
About da Vinci’s notebook and his dissection
Of an orchard meadow, his notes on how to efficiently
Dispatch a rival’s army: a gigantic crossbow aimed
At the archduke’s castle. If the meadow could be
Reduced to the size of a postage stamp and swallowed,
Then we would all be free. There are small
Folded messages filling a Ball Deal canning jar.
This is someone’s diary with an emphasis on the random.
The furnace steadily churns out its hot air. Sitting
In the sun is just a fantasy. It’s six above zero.
The sparrows chirp. The squirrels are hiding.
The cars crunch by slowly in the street. Leonardo
Has made sharp mirrored notes about the length
Of the orchard, where it starts, where it ends.
He has made notations of it in both summer and winter.
The stroke of his pen is hypnotizing. The way the ink
Soak into the paper is dreamlike and a bit
Like a dance of thin naked Moorish woman
In the shattering whiteness of the sun.

Moore is nationally known for his lifelong mastery of the haiku and Asian short-form poems.

He now turns to music, equally loved, but not given equal attention before. The poems reveal more than passion and response — this is clearly the work of a jazz scholar with a consummate understanding of what makes music; and an appreciation that becomes a lifestyle. Music casts a spell on Moore and he passes it along to us, and fortunately he has the language to give a greater refinement to listening. Making the reader feel what the writer feels is a classy way to write in this poetry industry, and Moore has the gift to go inside where music and words live, and translate them outward. Music serving the word is a delicate membrane. Lenard D. Moore turns it into a poetry dynamic.

A Note on Improvisations

Walsh is author of two previous chapbooks and this is his first premier/debut book of poems. It’s stunning. Born in West Virginia, he creates a verbal record of its natural beauty, thriving life, and the inflicted wounds that are destroying both (Spelter, West Virginia, Unincorporated). “It’s

not what you think. /DuPont owns the soiled ground. /They are on the hook for containment, /the fate and transport of contaminants, /site reclamation, health monitoring, cash settlements…If they can call us white trash, then it’s okay/to drink up, blot out, mine, blast, frack, and fuck/every hole and deposit. Then dump, / dredge, and spoil away every bit of us, /all we have left…We lived in little company houses they kept close, /wanted us to catch a glimpse on lunch break/of just what they held ransom. /As if we didn’t know.”

Each page is a powerful notice formed by the landscape: insistent, imagistic, with a lesson in each story. We can see the grand pattern with poetry as social contract, but it would mean nothing if subject and style were not so beautifully paired. Each poem is an ordinary blessing, often one about danger, but this knowledgeable perceptive writing is not rhetoric, it’s narrative — felt life — well served by the right word connections on the right lines, with the right stillness. Hope that Walsh wins a first book prize.

“All night the ghost factory is awake
making new ghosts.

Somewhere someone else
will do this for even less.

and a family pulls from the Creek
fish no one should eat.”

Apparently, Charles Bukowski is the gift that keeps on giving, as editor Debritto has three successful Bukowski books in print preceding this. Our first thought is how could Bukowski write so much in one lifetime? The next thought is, how could Bukowski write so much and drink so much? Maybe for that reason alone this book is astounding because it’s really good. The book is brimming with poems, letters, prose, and a signature Bukowski sketch drawing, plus a marked-up draft of a poem (written 6-29-78). I loved seeing the raw poem, with his deletions and corrections. Debritto beings him to life and keeps him here.

“The Great Zen Wedding” story is not great or even Zen but it’s hilarious. Caution: don’t leave this book open on the kitchen table for anyone underage to read it. Bukowski is profane, scatological, and born too soon for the #MeToo movement. Here’s an excerpt from a letter:

…nobody understands an alcoholic…I started drink-
ing young…at 16 and 17, and the next morning I’d always
get it — those looks, that hatred. of course, my parents hated
me anyhow. But I remember saying to them one morning:
“Christ, so I got drunk…You people treat me like a mur-
derer…” “That’s it! That’s it!” they said, “what you’ve done is
worse than murder!” They meant it. well, what they meant was
that I was socially disgracing them in front of the neighbors,
and there might be an excuse for murder, but for drinking…
never, by god, no! They must have meant it, because when
the war came on, they urged me to join the murder…It was
socially acceptable.

Grace Cavalieri is Maryland’s poet laureate. She founded and still produces “The Poet and the Poem” for public radio, now from the Library of Congress. Her latest book is Other Voices, Other Lives (Alan Squire Publisher).

A monthly column looking at books of poems and poetry, written by Grace Cavalieri