On Weil, Orwell, and the perils of political parties. 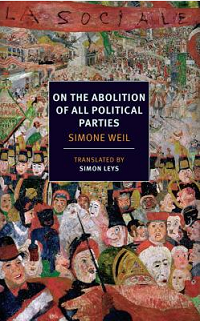 “The party told you to reject the evidence of your eyes and ears. It was their final, most essential command.”

In contemporary America, the signposts point to George Orwell’s 1984, that dystopian society where contradictions are etched in stone, and where truth is its opposite. It is a dimension of mind, a dormant mind, in which the truths of the party defy all other truths, where party loyalty trumps all other loyalties, and where the party line is the line to be toed.

In this domain, political parties become ends in themselves, as if they embodied all truth.

Start there, and you can begin to understand why Simone Weil (1909-1943) called for the abolition of political parties. Radical? Indeed. Then again, sometimes it takes an outsider to alert us to what we cannot see within the confines of our own political predicament. Consider, for example, the following insight from her 1943 essay (now in small-book form titled On the Abolition of All Political Parties):

“Nearly everywhere instead of thinking one merely takes sides: for or against. Such a choice replaces the activity of the mind. This is an intellectual leprosy; it originated in the political world and then spread through the land, contaminating all forms of thinking [political, cultural and religious]. This leprosy is killing us; it is doubtful whether it can be cured…” [italics added].

Does any of that ring true? Just consider how our perception of political realities is shaped by the cable-news station to which we pledge our cerebral allegiance. The problem, though it holds true for all political parties, is particularly acute in Republican quarters, where compliance is the rule and silence the norm no matter how bizarre or immoral the imperial text messages are that have come to determine our collective fate. It is a malady that poisons the entire body politic, as the countless absurd events since 2016 make manifest.

Can one ever be truly committed to the public interest and remain loyal in any meaningful way to his or her political party? Weil’s answer: No, because “the party spirit has infected everything.”

If that is the measure — if the party is to prevail at all costs — then the ideal of the common good becomes impossible to pursue. The PARTY becomes both the means and the ends. When that occurs, language (recall Orwell’s “Newspeak”) itself becomes a contradiction, words become their opposite. In the process, the past forfeits its meaning to the partisan demands of the present. Case in Orwellian point? Senator Lindsey Graham:

When presidential loyalty and party fidelity combine, contradictions cease to be of any moment. This irony, in turn, reveals a yet more precarious one: The party makes the president, but then the president remakes the party such that its values become subservient to his will.

Once that transformation occurs, for the party to survive, it must bow to the president who stole its legitimacy. Thus, the “Graham Factor” phenomenon: that willingness to say anything either out of fear of presidential retaliation or fear of party defeat. Or, most likely, both.

In the end, the party becomes its own end. At the outset, it claims to defend the values of its followers, but as it grows, it amasses ever more power to the point that maximizing its own power becomes its end-all. That problem, as we have seen it play out in spades in recent times, becomes more severe when the sole purpose of the party is to preserve the prerogative of the president.

Where power is the touchstone, Weil tells us, “The goal of the political party is something vague and unreal,” save for its obsession with denouncing opposing parties. That pursuit of naked power must at one and the same time allow for the vagaries of supremacy and for the annihilation of the other — persons or parties holding different views.

Where the Graham Factor is the imperative, no one dares contest what is spewed from the Master who rules over the party’s Ministry of Truth. Facts are but opinions. Reality is an attitude. Everything is cast in the “black-white” language of doublespeak, this to the delight of frenzied partisans.

“When we first heard of the political myths we found them so absurd and incongruous,
so fantastic and ludicrous that we could hardly be prevailed upon to take them seriously.
By now it has become clear to all of us that this was a great mistake.”

All lies are true; no exaggeration is beyond belief; and anything to the contrary is a lie. Absurd?  Yes, but such absurdities have come to claim us, much like a cancer claims a cell. When the ludicrous becomes normal, the normal becomes ludicrous. Though circular, it is a telling truth, one that, in time, becomes terrifying.

Partisan principle: There is no room for the honesty that comes with thinking freely, or with the courage to oppose the ruinous tendencies of presidential priorities or party dogma. Like Orwell’s Winston Smith, one must accept the limits placed on one’s mind: “Don’t you see that the whole aim of Newspeak is to narrow the range of thought?”

This holds true even in times of covid-19, when an existential plague threatens all aspects of life as we know it — when even the science of medicine is given the bum’s rush out of the room during press conferences.

Is Weil’s call for the abolition of political parties a realistic possibility? No, not as long as the rules of today’s politics govern. Then again, if abolition is not the answer, at least the need for it reveals the gravity of the problem — that “leprosy [that] is killing us.”

Ronald Collins is co-director of the History Book Festival. His writings on Simone Weil have appeared in the journal Cahiers Simone Weil, in the book Simone Weil’s Philosophy of Culture (Cambridge University Press, 1993), in the Washington Post, and, more recently, in the Independent and in the Los Angeles Review of Books (and here).

The author of Murder on the Quai comes to DC Tues., July 5, at 7PM

Malfeasance on an Epic Scale

A look at Pay Any Price: Greed, Power, and Endless War